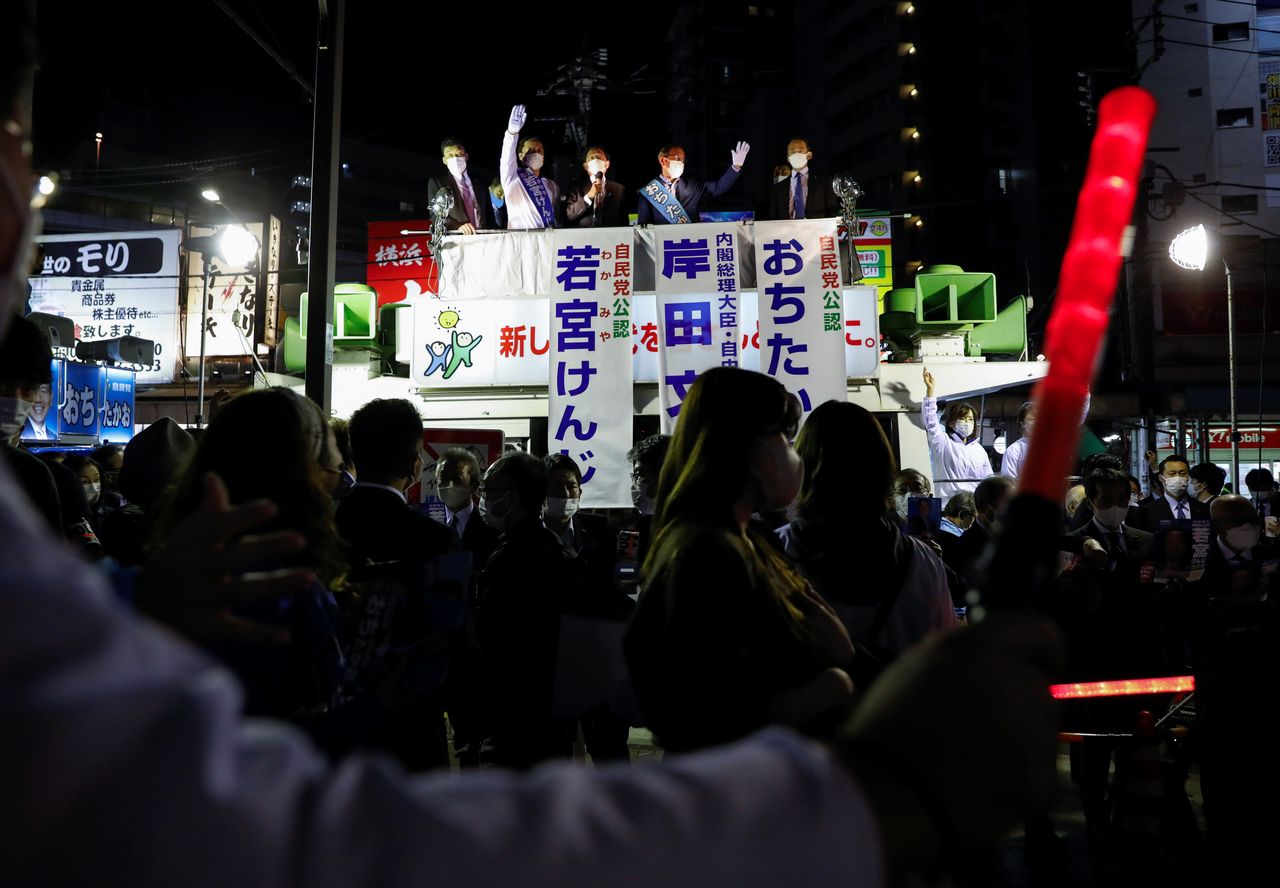 Japan's Prime Minister Fumio Kishida, who is also the ruling President of Liberal Democratic Party, delivers a speech to voters from atop of a campaigning bus on the last day of campaigning for the October 31 lower house election, amid the coronavirus disease (COVID-19) pandemic, in Tokyo, Japan October 30, 2021. REUTERS/Issei Kato

By Ju-min Park and Kiyoshi Takenaka

TOKYO (Reuters) - A right-wing Japanese party with a stronghold in the western city of Osaka surprisingly emerged as the third-largest in Sunday's election, capitalising on some discontent with the central government and the left-wing opposition.

Prime Minister Fumio Kishida's ruling Liberal Democratic Party (LDP) defied expectations and held its strong majority in the lower house poll, solidifying his position in a fractious party and allowing him to ramp up economic stimulus.

But the left-leaning opposition Constitutional Democratic Party of Japan (CDPJ) lost some seats although it remained the second-biggest party in the house.

The conservative Japan Innovation Party (JIP), which almost quadrupled its haul to 41 seats in the 465-seat legislature, ended up the election's biggest winner, overtaking even the Komeito party, the LDP's coalition partner.

The right-wing JIP has been seen as a possible ally for the LDP's push to revise the constitution. But it has also called for deregulation, tax cuts and decentralisation of authority to help trigger growth

"They took a more critical stance towards the central government, and managed to extract votes from those hesitant about it, but not pleased with the main opposition," said Corey Wallace, a Japanese politics expert at Kanagawa University.

One reason for the JIP's success was the party's young No. 2, Osaka governor Hirofumi Yoshimura, and his social media reach combined with frequent appearances during the COVID-19 pandemic, when traditional campaigns had been limited, said Hosei University professor Hiroshi Shiratori.

Unlike many other Japanese mainstream politicians, the 46-year-old who has 1.2 million followers on Twitter, speaks off the cuff, and often makes impassioned television pleas to the public to comply with pandemic-related restrictions.

However, like the LDP, the JIP favours the revision of the post-war constitution and allowing for the defence budget to go above the informal ceiling of 1% of the GDP. The LDP for the first time called for raising defence spending to 2% in its manifesto.

"If they join hands in promoting policy to bolster defence, there will be little CDPJ or the Japanese Communist Party can do," said Mikitaka Masuyama, professor at the National Graduate Institute for Policy Studies.

A stronger JIP could also put more focus on Japan's drive to build casinos. The party supports the effort and Osaka in September picked MGM Resorts International and partner Orix Corp to build what could be Japan's first casino.

Wallace said that Osaka residents are "not as strongly opposed to casinos," as in other potential sites like Yokohama, adding that JIP's win "despite support for a casino being one of their clearer and more committed positions suggests there is a decent chance of casino supporters eventually prevailing."

Ichiro Matsui, the mayor of Osaka who leads the party, said after the election that the group will stay in opposition and keep the Kishida administration in check by "saying what's right is right and what's wrong is wrong."