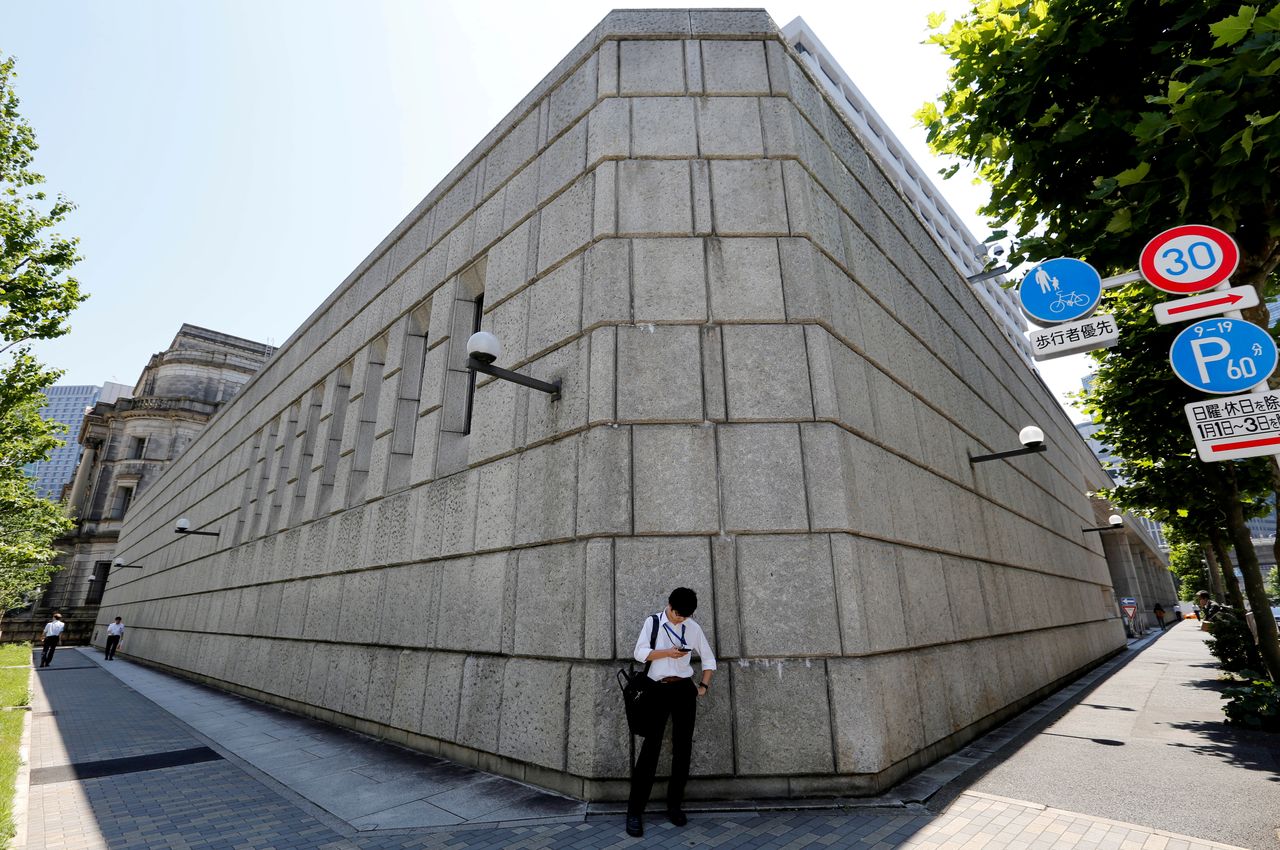 FILE PHOTO: A man looks at a mobile phone in front of the Bank of Japan building in Tokyo, Japan June 16, 2017. REUTERS/Toru Hanai

TOKYO (Reuters) - Japanese policymakers on Tuesday reaffirmed the Bank of Japan's (BOJ) commitment to its 2% inflation target in a meeting held between the central bank chief and the country's economy and finance ministers.

The Japanese government and the central bank also agreed to keep in close contact and cooperation, in line with commitments made in a 2013 joint statement, which also laid out the country's inflation target for the first time.

Prior to the meeting, there had been some market speculation that the government and the BOJ may review the joint statement and the 2% inflation goal, given stubbornly weak prices have made the target elusive.

"The most important issue was to reaffirm the joint statement," Economy Minister Daishiro Yamagiwa told reporters after the meeting.

"The government and the BOJ must keep close contact with each other. The BOJ aims to achieve the 2% price stability target while we proceed with economic growth strategy."

BOJ Governor Haruhiko Kuroda, Finance Minister Shunichi Suzuki and Yamagiwa discussed the economy and financial situation in a meeting that lasted less than an hour, but Suzuki said the yen was not on the agenda.

The Japanese currency has weakened to around 114 yen in recent weeks, having touched an almost four-year trough of 114.695 on Oct. 20.

It was the first meeting of its kind since January 2013, when the government and the central bank issued a joint statement laying out the 2% inflation target for the BOJ's policy objective.

The joint statement issued in January 2013 also called on the government to press ahead with efforts to put tattered public finances in order.

Nearly nine years later, those objectives have yet to be achieved, as massive money printing has failed to spur inflation while stagnant growth and the COVID-19 pandemic have forced the government to keep its fiscal spigot wide open.

With core consumer inflation still close to zero, the central bank's estimates show the 2% inflation target will not be met even in fiscal 2023 when Kuroda serves out his term.