By Jake Spring and Jeff Mason

GLASGOW (Reuters) -Leaders at the COP26 https://www.reuters.com/business/cop global climate conference pledged on Tuesday to stop deforestation by the end of the decade and cut emissions of the potent greenhouse gas methane to help slow climate change.

On the second day of the two-week summit in Glasgow, Scotland, wealthy nations took some overdue actions to provide long-promised financial help for the developing countries worst hit by global warming.

The United Nations conference aims to keep alive a receding target of capping temperatures at 1.5 degrees Celsius (2.7 Fahrenheit) above pre-industrial levels https://www.reuters.com/business/cop/paris-glasgow-cutting-through-climate-jargon-2021-10-27, to avert still greater damage than has already been caused by greenhouse gases.

"We must take care to guard against false hope and not to think in any way that the job is done, because it is not. There is still a very long way to go," he told a news conference.

More than 100 countries joined a U.S.- and EU-led effort to cut emissions of methane https://www.reuters.com/business/environment/global-watchdog-track-promised-cuts-potent-greenhouse-gas-methane-2021-10-31 30% by 2030 from 2020 levels, potentially a step in stemming the overheating of the planet.

"It's been a big mistake, quite frankly, for China - with respect to China not showing up," Biden said at a news conference.

"The rest of the world is gonna look to China and say what value added are they providing? And they've lost the ability to influence people around the world and all the people here at COP, the same way I would argue with regard to Russia."

China said Xi https://www.reuters.com/business/environment/china-says-xi-was-given-no-option-video-address-cop26-2021-11-02 had not been given an opportunity to deliver a video address, and had to send a written response instead. Xi offered no additional pledges.

China was represented in Glasgow by its chief climate negotiator Xie Zhenhua, who said in remarks to reporters on Tuesday that "five years were wasted" because Biden's predecessor Donald Trump pulled the United States out of the Paris Agreement and it was time to "work harder and catch up".

Leaders of developing countries most at risk from the effects of climate change, such as heatwaves, droughts, storms and flooding, told delegates the stakes could not be higher.

"Let's work for the survival of ours and all species. Let's not choose extinction," said Trinidad and Tobago Prime Minister Keith Rowley.

The Global Methane Pledge, launched on Tuesday after being announced in September with just a few signatories, now covers countries representing nearly half of global methane emissions and 70% of global GDP, Biden said.

Methane is more short-lived in the atmosphere than carbon dioxide but 80 times more potent in warming the planet. Cutting emissions of the gas, estimated to have accounted for 30% of global warming since pre-industrial times, is one of the most effective ways of slowing climate change.

Among the signatories is Brazil - one of the five biggest emitters of methane, generated in cows' digestive systems, in landfill waste and in oil and gas production. Three others - China, Russia and India - have not signed up, while Australia https://www.reuters.com/business/cop/australia-will-not-back-eu-us-led-pledge-cut-methane-emissions-2021-10-27 has said it will not back the pledge.

The United States also unveiled its own domestic proposal to crack down with a focus on the oil and gas sector, where leaky infrastructure allows methane to escape into the atmosphere.

More than 100 national leaders also signed a promise to halt the destruction of the world's forests which absorb roughly 30% of carbon dioxide emissions, according to the nonprofit World Resources Institute.

In 2020, the world lost 258,000 sq km (100,000 sq miles) of forest - an area larger than the United Kingdom, according to WRI's Global Forest Watch. The conservation charity WWF estimates that 27 football fields of forest are lost every minute.

The pledge https://www.reuters.com/article/climate-un-forests/over-100-global-leaders-pledge-to-end-deforestation-by-2030-idUSL4N2RS3VG to halt and reverse deforestation and land degradation by the end of the decade is underpinned by $19 billion in public and private funds to be invested in protecting and restoring forests.

The signatories again include Brazil, which has carried out soaring deforestation under right-wing President Jair Bolsonaro, Indonesia and the Democratic Republic of Congo. Together they account for 85% of the world's forests.

Under the agreement, 12 countries pledged to provide $12 billion of public funding between 2021 and 2025 for developing countries to restore degraded land and tackle wildfires.

At least $7.2 billion will come from private sector investors representing $8.7 trillion in assets under management, who also pledged to stop investing in activities linked to deforestation such as cattle, palm oil and soybean farming and pulp production.

The funding may help reduce mistrust among developing countries caused by the failure of wealthy nations to deliver on a 2009 promise to stump up $100 billion per year by 2020 to help them tackle climate change.

This mistrust is one of the main obstacles to climate progress, making some developing countries reluctant to embrace steep emission cuts.

"We see double standards creeping into our thinking, whereby those who have already benefitted from carbon-driven economies would like to prevent emerging economies laying similar foundations for their political stability, social development and economic prosperity," Suriname President Chan Santokhi said.

On Tuesday, Japan said it would offer up to $10 billion over five years in additional assistance to support decarbonisation in Asia.

U.S. climate envoy John Kerry said this could leverage another $8 billion from the World Bank and other sources, probably allowing the $100 billion threshold of climate financing to be reached by 2022, rather than 2023 as previously expected.

In another deal signed on Tuesday, Britain and India launched a plan to improve connections between the world's electricity power grids to help accelerate the transition to greener energy.

But there was scant sign of shared resolve by the world's two biggest carbon polluters, China and the United States, which together account for more than 40% of global emissions but are at odds on numerous issues.

Biden has singled out China and leading oil producer Russia for failing to step up their climate goals in Glasgow, while Beijing has rejected Washington's efforts to separate climate issues from their wider disagreements.

The Communist Party-run Global Times said in an editorial on Monday that Washington's attitude had made it "impossible for China to see any potential to have fair negotiation amid the tensions". 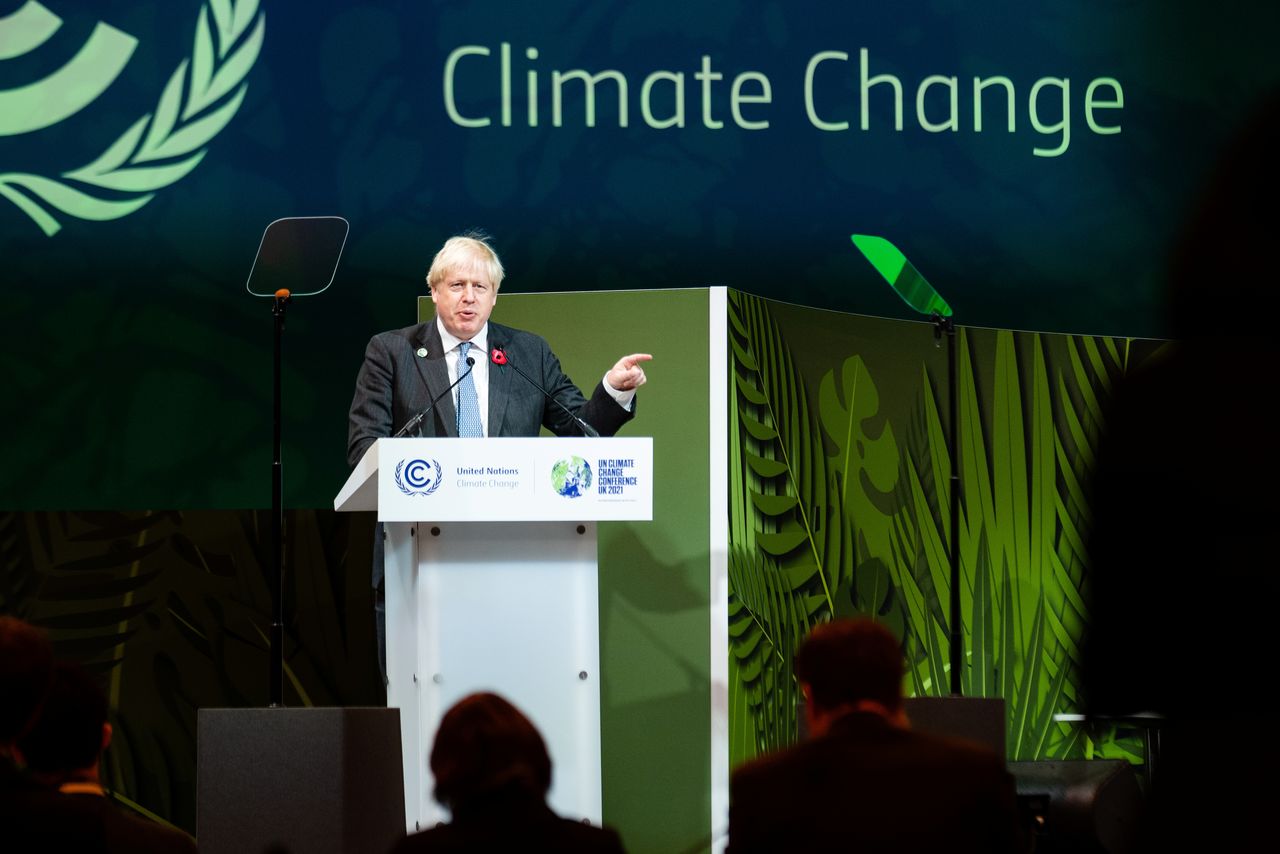 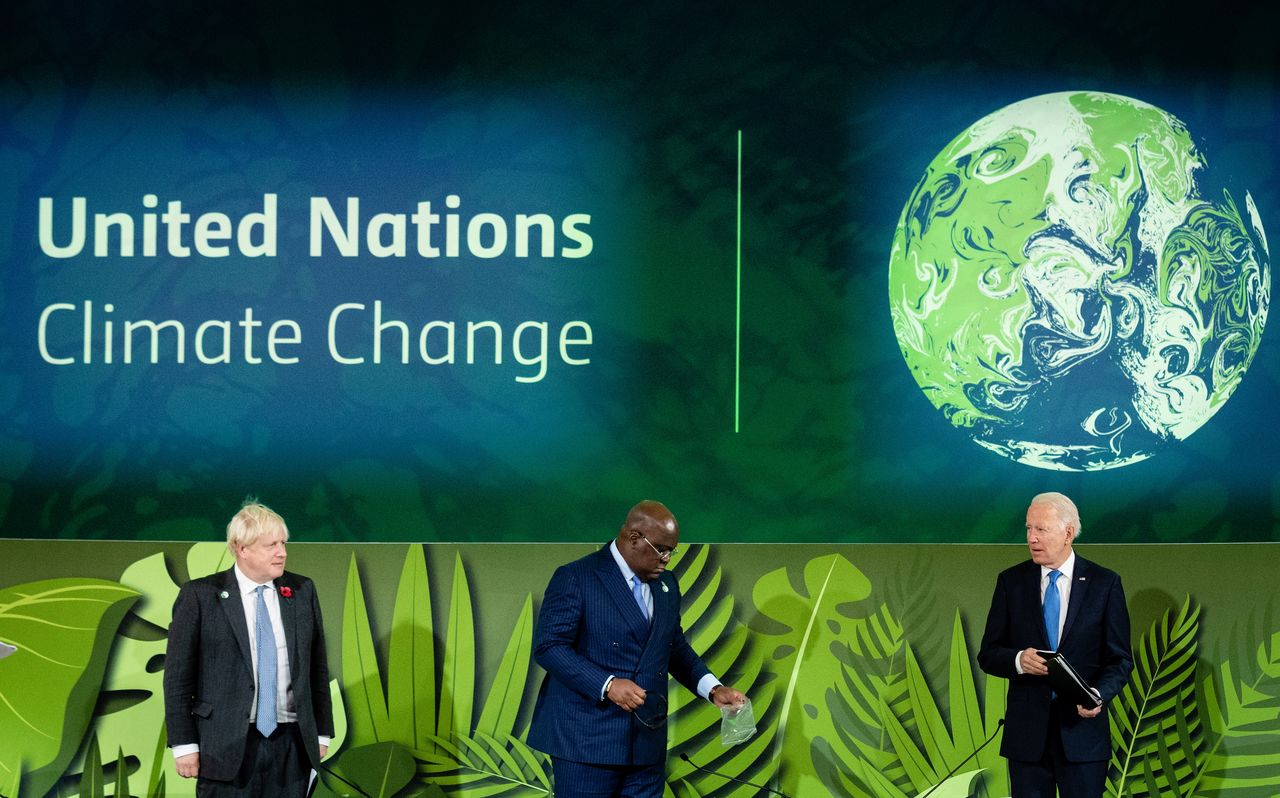 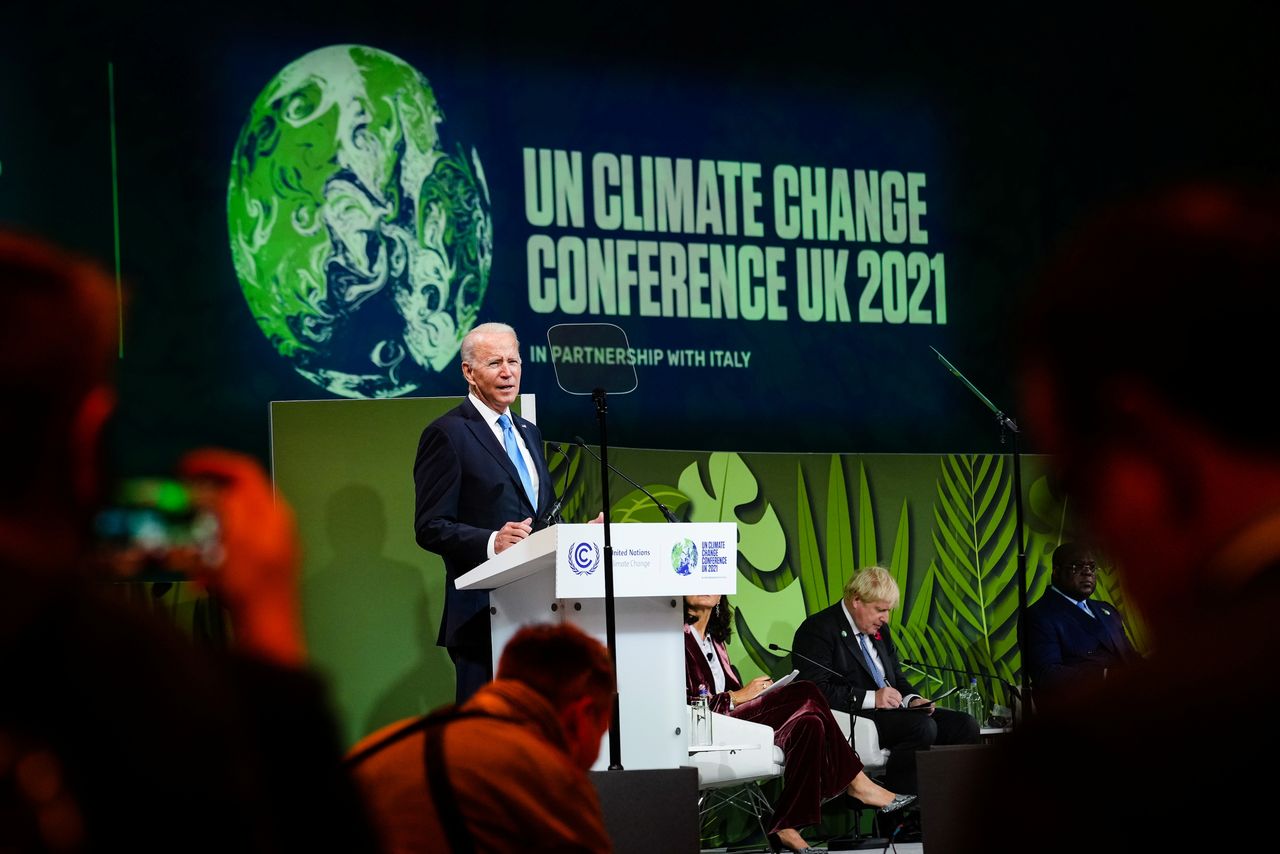 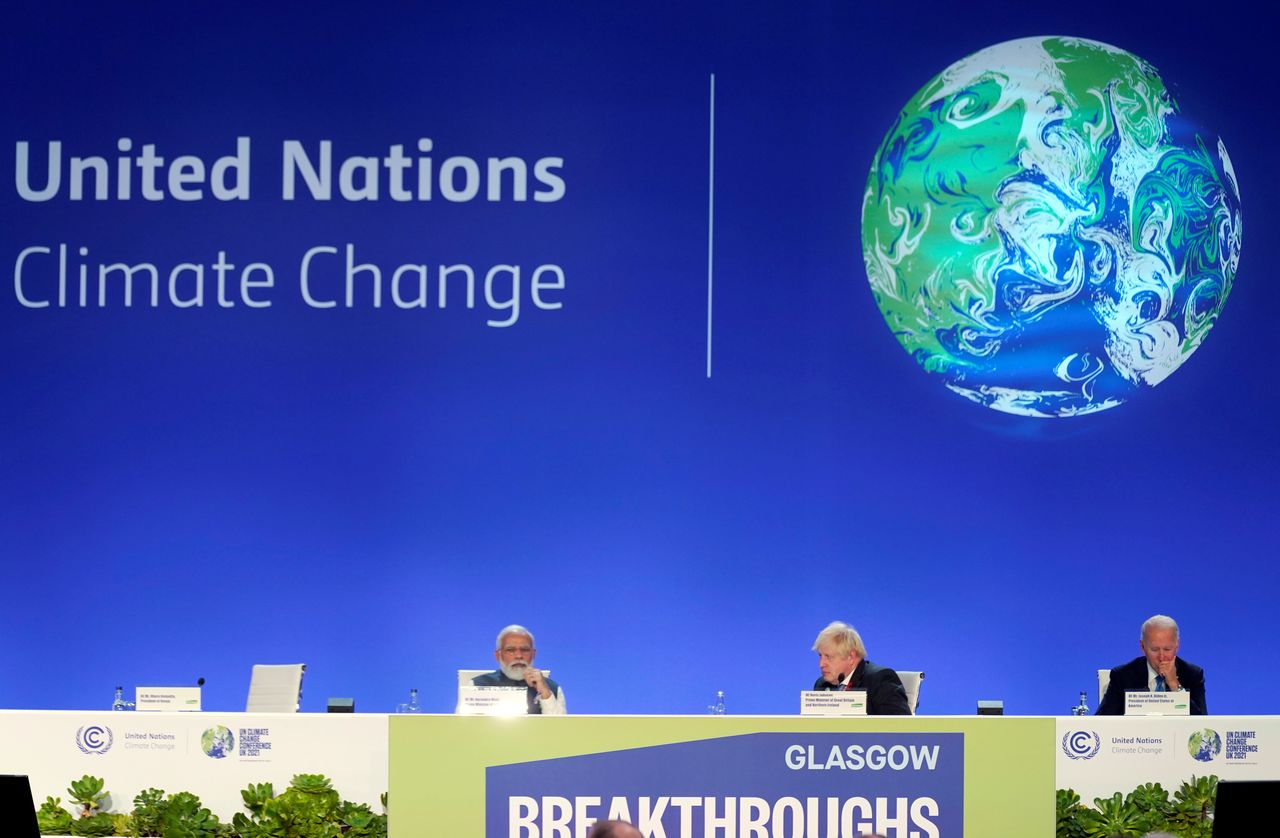 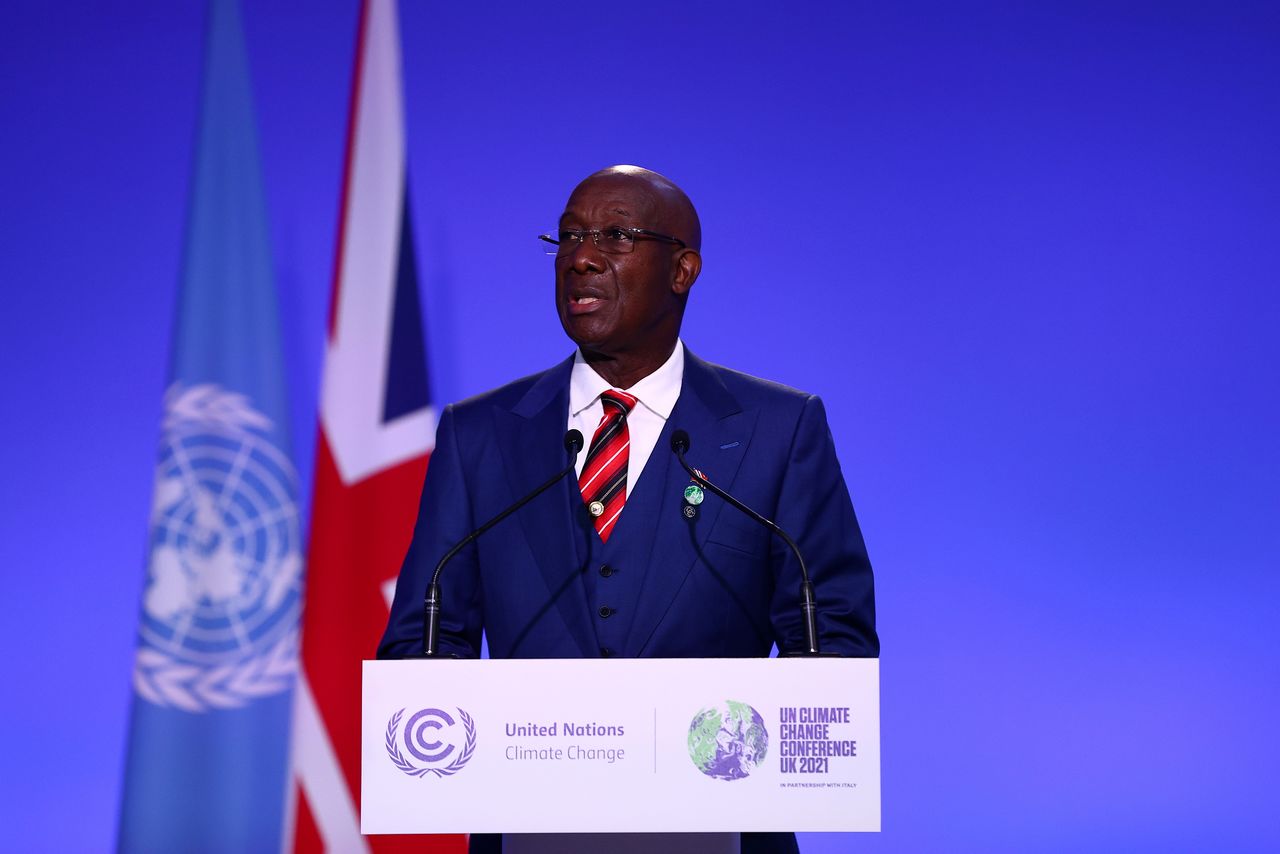