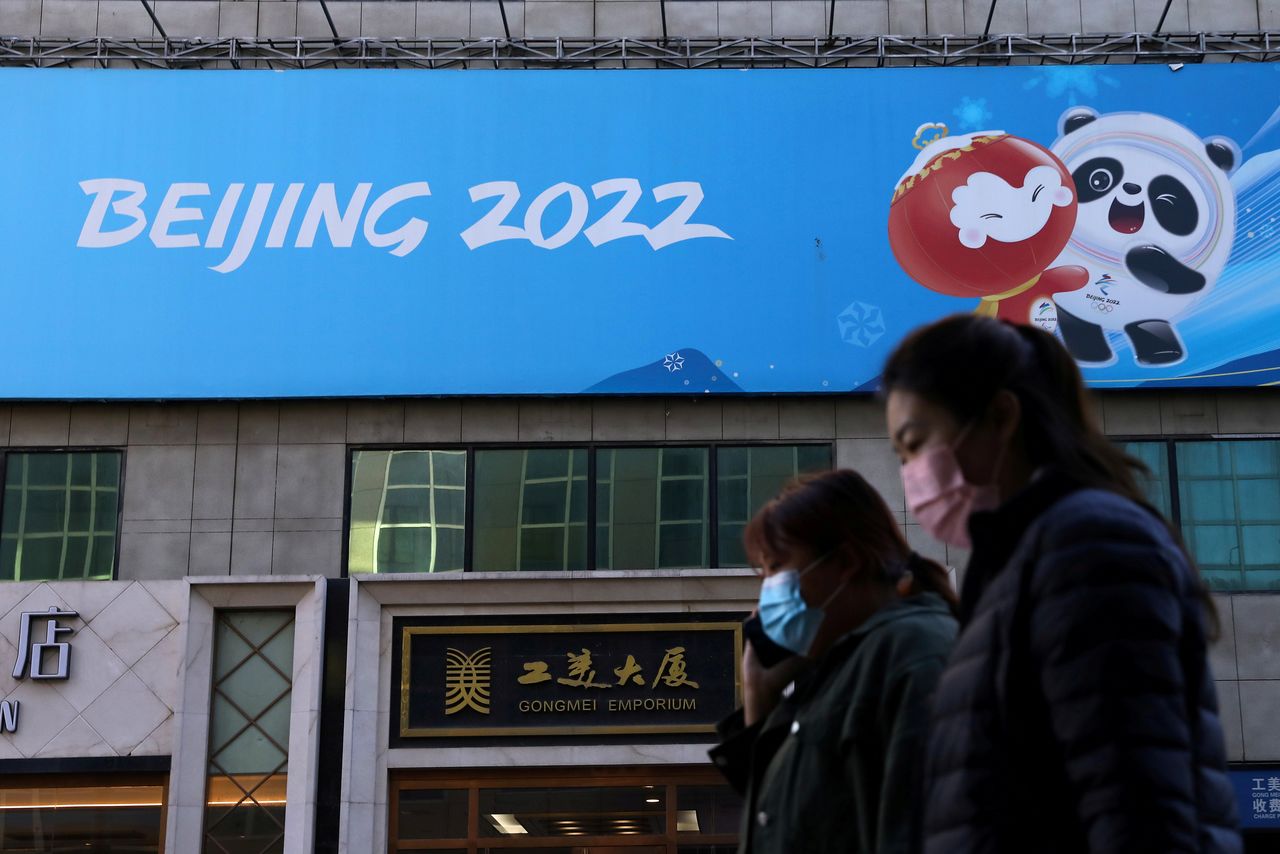 FILE PHOTO: People walk past a banner with a sign of Beijing 2022 Winter Olympic Games, 100 days ahead of the opening of the event, in Beijing, China October 27, 2021. REUTERS/Tingshu Wang

(Reuters) - China should brace for a string of blowout losses at the 2022 Beijing Olympic men's ice hockey tournament unless the International Ice Hockey Federation (IIHF) steps in and throws the hosts a lifeline, warned two international coaches.

Dave King, one of the most respected names in international hockey who was head coach of the Canadian men's national team for three Olympics and worked with Japan to prepare them for the 1998 Nagano Winter Games, told Reuters scores could be "scary" with China in a group alongside powerhouses Canada and the United States.

Jim Paek, who coached and prepared South Korea for the 2018 Pyeongchang Winter Games, voiced similar concerns particularly with the world's top player returning to the Olympics stage after the NHL sat out the showcase four years ago.

"When you have host countries that are allowed to automatically qualify this is what you get," warned King, who has also coached in the NHL, Russia, Sweden and Germany. "What is very important is to have a plan and stay with it and I don't think the Chinese did a very good job with that, they have been all over the map.

"To me there is nothing a coach can do at this point, there is no magic wand.

"It's scary, it really is. They are in way over their head for sure."

As the host nation, China is guaranteed a spot in every event at the 2022 Games but IIHF president Luc Tardif said in September that the men's team could be prevented from playing due to its "insufficient sporting standard".

With China apparently determined to take part in the men's tournament, the IIHF Council confirmed earlier this month it would not seek to block the hosts from competing.

China's plans to ice a competitive team have been disrupted by the COVID-19 pandemic and restrictive nationality rules that largely prevent them from pursuing players with dual citizenship as South Korea, Italy and Japan did when they hosted the Winter Games.

The Kunlun Red Star, a China based team stocked with Olympic hopefuls competing in the Kontinental Hockey League (KHL), was designed to be the base on which a program was built.

But through 26 games Red Star sits bottom of the 24 team league.

"The situation with COVID and not being able to play international competitions... their preparation time has shortened," said Paek, the first Korean-born hockey player to play in the NHL and member of the Pittsburgh Penguins 1991 Stanley Cup winning team. "We had four years of proper preparation but China does not have that luxury and that time is coming to an end very quickly.

"Those are a lot of things against them right now."

The IIHF said it is working with the CIHA (Chinese Ice Hockey Association) but with the Feb. 4-20 Beijing Games just 12 weeks away there are limited fixes available.

There will be no game for China to look forward to in what can only be described as Group of Death.

Along with geopolitical rivals Canada and the U.S., which will be stocked top to bottom with NHL all-stars, the pool also includes Germany, silver medallists from the 2018 Pyeongchang Olympics.

Adding to the potential for embarrassment, goal differential is a tie-breaker in Olympic hockey, hence providing incentive for teams to run up the score.

"The potential for embarrassment is there," said King. "I don't know what you can do. I don't have a solution.

"I think the IIHF has to find a way to rectify this.

"They (IIHF) might have to get some sort of agreement with Canada, U.S. and Germany that at some point in the game they are up so much can you call it off.

"But they are competitors they play every game to win every game.

"Goal differential is an important point as well, it puts added incentive to pump up and score.

"It has the possibility to be not a very good experience for the Chinese or for the Olympic Games for that matter."

(Reporting by Steve Keating in Toronto)