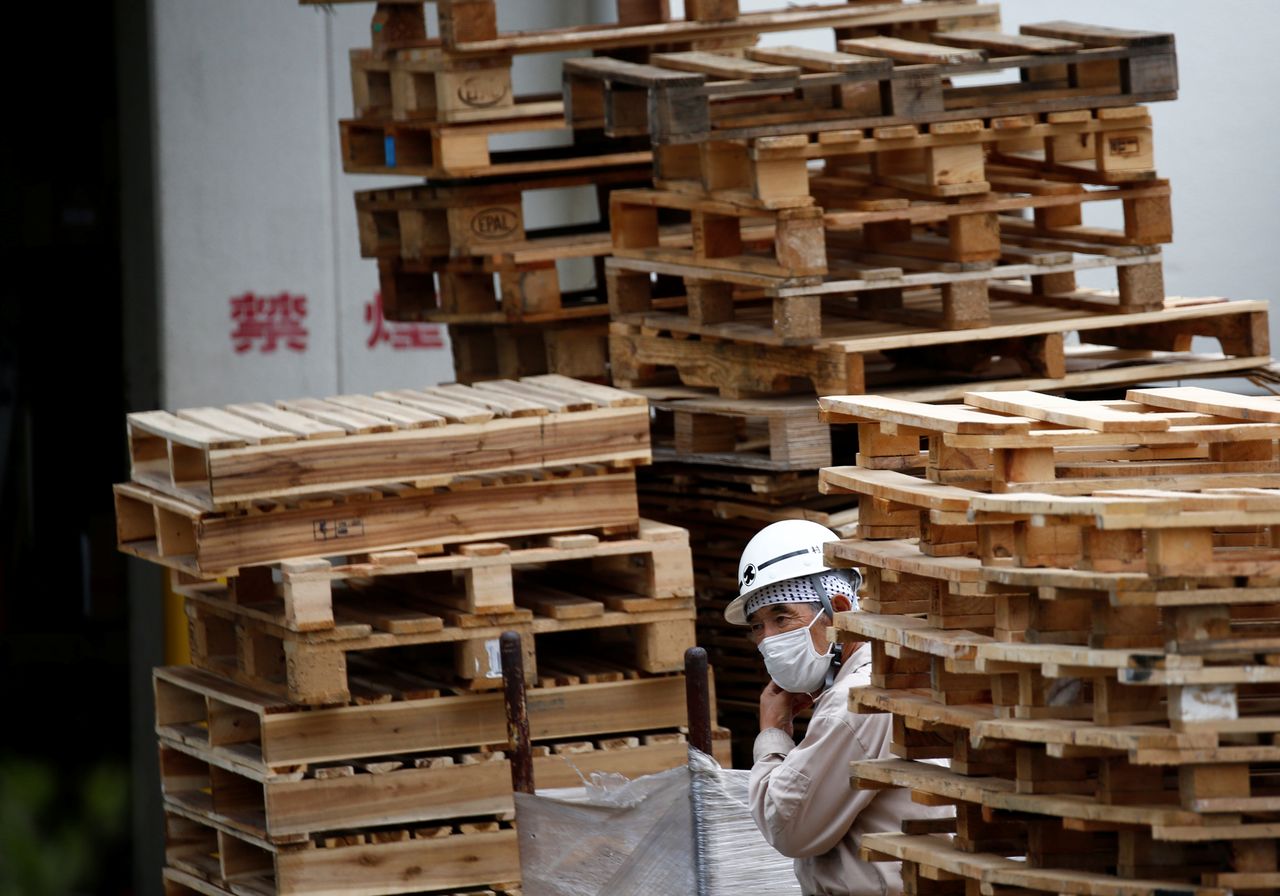 A worker takes a rest at a warehouse at the Keihin Industrial Zone in Kawasaki, Japan September 12, 2018. REUTERS/Kim Kyung-Hoon

The mood among manufacturers deteriorated for the third month in November, but they became more optimistic about the outlook, according to the monthly poll, which tracks the Bank of Japan's (BOJ) closely watched Tankan quarterly survey next due on Dec. 13.

The sentiment index among service-sector firms picked up slightly in November, while their three-month outlook also improved, as the government eased coronavirus restrictions from the end of September due to falling COVID-19 cases, the poll found.

The poll of 502 big and mid-sized companies conducted between Oct. 26 and Nov. 5, of which 254 responded, showed managers remained worried about supply issues and commodity inflation.

"Carmakers' output cuts due to chip shortage and soaring steel prices kept our revenue and profits below expectations," said a manager at a machinery company.

The Reuters Tankan sentiment index for manufacturers fell to 13 in November from 16 in October - matching its lowest since April - while the service index rose to a three-month high of 1 from minus 1.

While Japan's economic recovery from the COVID-induced slump has been driven by exports, with consumption hit by coronavirus restrictions, semiconductor shortages and other supply constraints have hurt manufacturers in recent months. Meanwhile, the services sector is being underpinned by a reopening economy.

But services companies in the poll said they had not seen a clear boon for their businesses, with demand lost during the prolonged period of COVID-19 curbs yet to return.

The government lifted its COVID-19 state of emergency restrictions at the end of September, and has since eased some other curbs which remained in place in October in Tokyo and other big cities.

"The economy appeared to have reopened after the lifting of state of emergency," said a wholesale company manager. "But the recovery in demand is still sluggish."

However, some BOJ board members flagged ongoing supply chain constraints as a downside risk to the Japanese economy at its October policy meeting, where they decided to keep the ultra-easy monetary policy unchanged.

Manufacturers' improved outlook was mainly driven by optimism among automakers, who produce Japan's No. 1 export item, even as the industry has been particularly hard hit by supply shortages.

The three-month forward-looking reading among the autos/transport equipment sector rose to +29, from 0 in October.

Manufacturers at large, except those in sectors heavily affected by rising commodity prices, were also more upbeat about their business prospects in February 2022.

"Although our performance hasn't recovered to pre-pandemic levels yet, the impact from COVID-19 has bottomed out," a precision machinery maker manager said. "It's on a path to recovery."