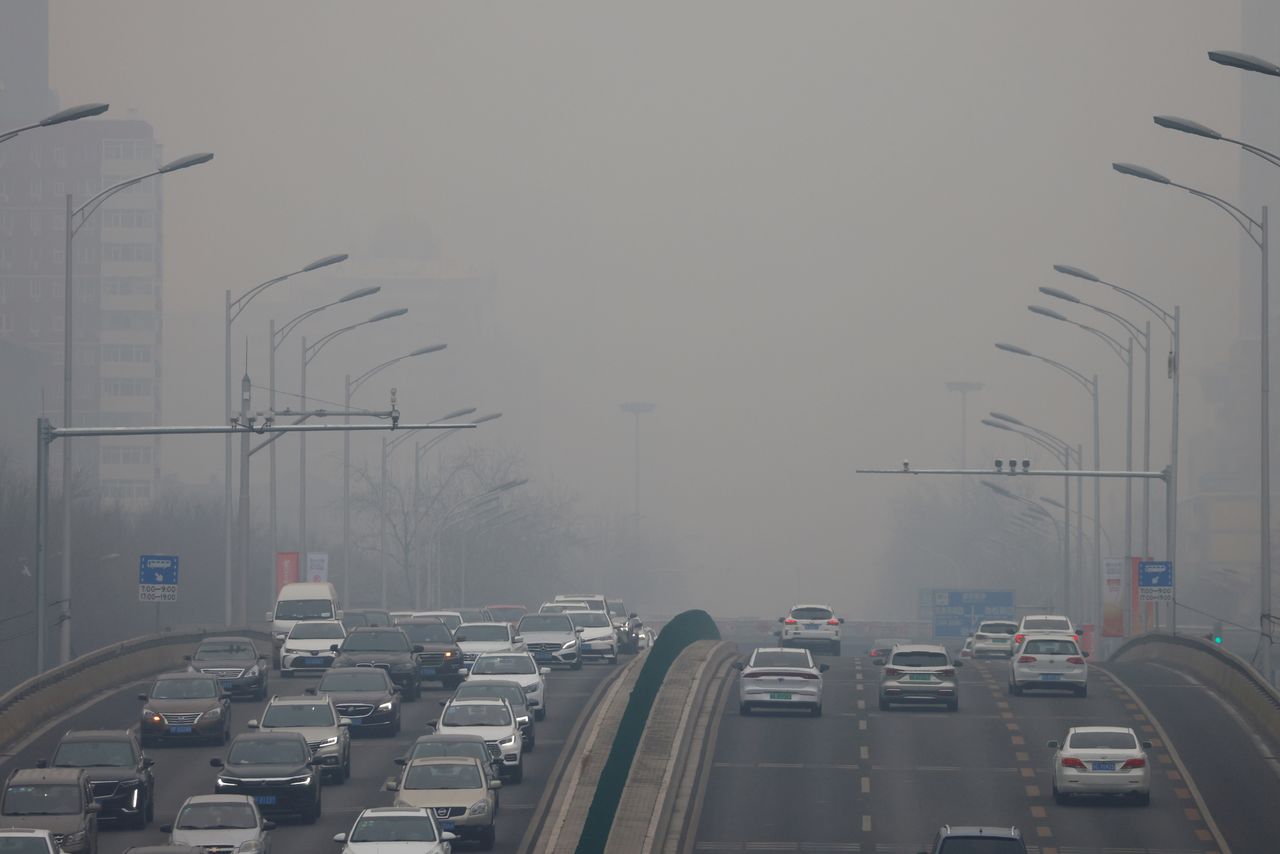 FILE PHOTO: Cars move on a road during a day with polluted air, following the outbreak of the coronavirus disease (COVID-19), in Beijing, China February 13, 2021. REUTERS/Carlos Garcia Rawlins//File Photo

GLASGOW (Reuters) - A group of countries, companies and cities committed on Wednesday to phasing out fossil-fuel vehicles by 2040, as part of efforts to cut carbon emissions and curb global warming.

But the world's top two carmakers, Toyota Motor Corp and Volkswagen AG, as well as major car markets China, the United States and Germany, did not sign up, highlighting the challenges in shifting to zero emissions.

The Glasgow Declaration on Zero Emission Cars and Vans, unveiled at climate talks https://www.reuters.com/business/cop in the Scottish city, sees the groups pledge to "rapidly" accelerate the transition to low-carbon emission vehicles, aiming to green leading markets by 2035.

Martin Kaiser, Executive Director of Greenpeace Germany, said the absence of the major economies and producers was "gravely concerning".

"To stop new fossil fuels, we need to cut off our dependency," he said. That means moving on from combustion engines towards electric vehicles and creating clean public transport networks without delay."

A German environment ministry spokesman said the country's government would not sign on Wednesday as it had not reached internal consensus on a "marginal aspect" of the pledge concerning whether fuels made from renewable energy but burned in a combustion engine could form part of the solution.

Cars, trucks, ships, buses and planes account for about a quarter of all global carbon emissions, data from the International Energy Agency showed, mostly from road vehicles.

Other countries signing up included New Zealand and Poland, joining a number of nations already committed to ensuring all new cars and vans are zero emission by 2040 or earlier, including Britain, host of the COP26 summit.

Among other leading companies and cities on board are ride-hailing company Uber and food retailer Sainsbury's, the South Korean capital Seoul and Brazil's Sao Paolo.

As countries look to agree a way to price carbon globally, Volvo Cars, which has already committed to going fully electric by 2030, said separately it would assume a carbon price of 1,000 Swedish crowns on all future projects.

The commitment comes on a day dedicated to transport at the conference, where policymakers are looking to accelerate efforts to cap global warming by mid-century.

While the United States is not on board, key car-buying states like California and New York are.

An industry source said some carmakers are wary of the pledge because it commits them to a costly shift in technology, but lacks a similar commitment from governments to ensure that the necessary charging and grid infrastructure would be built.

The European Commission has proposed an effective ban on fossil-fuel vehicles by 2035, accompanied by a commitment to a charging infrastructure demanded by carmakers.

(This story corrects to read Volvo Cars in bullet point, paragraphs 9 and 12)