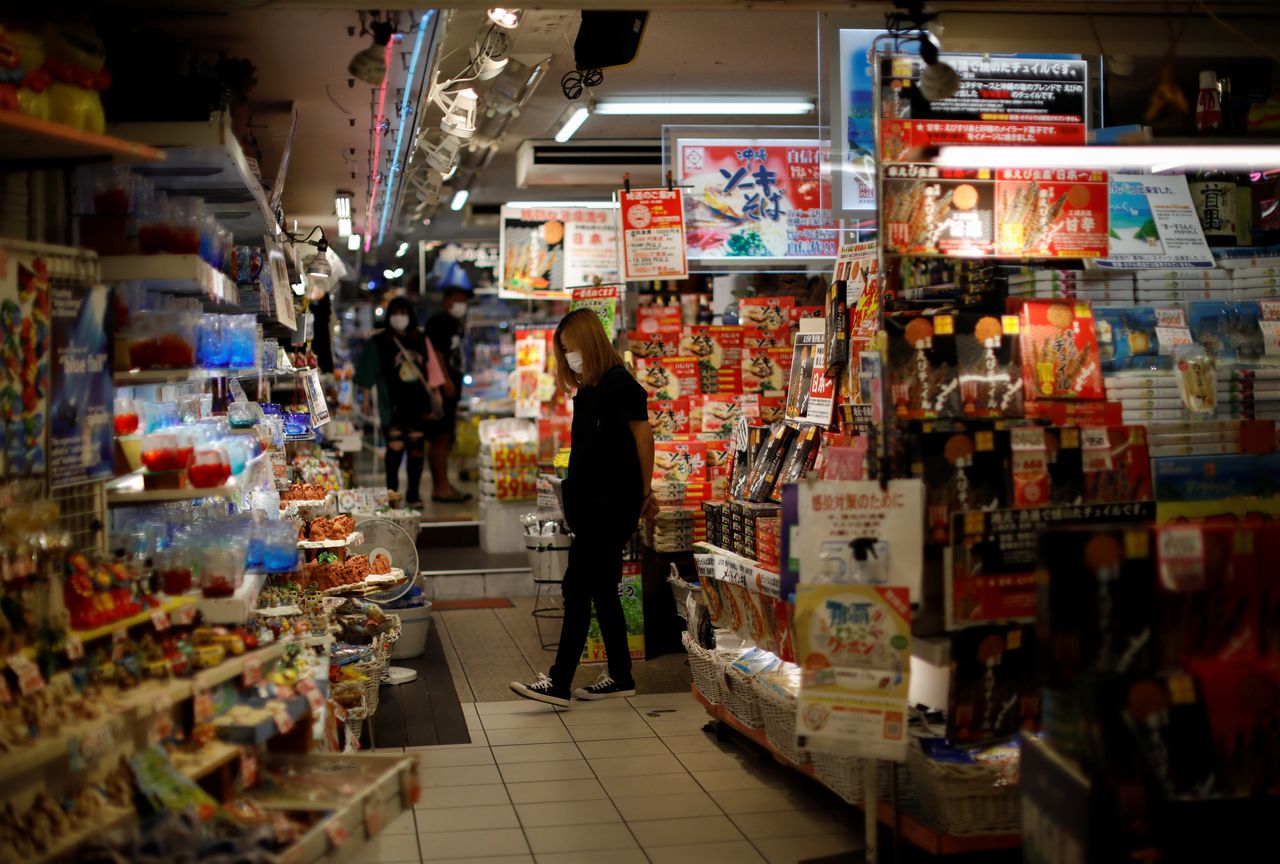 FILE PHOTO: Shoppers wearing protective face masks, amid the coronavirus disease (COVID-19) pandemic, are seen inside a souvenir shop along the Kokusai-dori in the prefectural capital Naha, on the southern island of Okinawa, Okinawa prefecture, Japan, October 24, 2021. REUTERS/Issei Kato

TOKYO (Reuters) - Japan's core consumer prices rose for the second straight month in October, as fuel costs accelerated at the fastest pace in more than a decade and pressures from raw materials shortages gradually passed through to retailers.

Consumer inflation is expected to pick up in coming months due to higher fuel costs, though any price rises in the country will likely be moderate compared with other advanced economies as weak wage growth limits firms from passing on hikes.

That matched the median forecast in a Reuters poll and followed a similar rise in September, which was the first uptick since March last year.

Overall energy prices soared 11.3% from a year earlier in October, posting their biggest rise since September 2008, thanks largely to a jump in fuel costs, which surged 21.4% year-on-year, their largest gain since August 2008.

The data will be among factors the Bank of Japan will scrutinise at its last policy meeting of the year, scheduled for the middle of next month.

"This is different from the stable price rises that the Bank of Japan is looking for," said Ayako Sera, market strategist at Sumitomo Mitsui Trust Bank.

The soaring fuel prices were leading to cost pressures in daily life, she said. "It's having absolutely a negative impact on the economy."

Japan has found itself exposed to soaring global commodity prices, which led to the fastest rise in wholesale inflation in four decades in October. But core CPI has stayed near zero as weak consumption and wage growth keep firms from raising prices.

The government is set to unveil a record $488 billion spending package which is expected to include support for the agriculture, forestry and fisheries sectors and logistics firms to help them cope with soaring fuel costs.

BOJ Governor Haruhiko Kuroda said this week he expected inflation to accelerate to around 1% in the first half of next year as the economy recovers to pre-coronavirus levels, still far off its 2% target.

The central bank has stuck to massive monetary stimulus in its quest to have inflation reach that illustrious target, despite worries about the side-effects of prolonged low interest rates to banks' bottom lines.

Friday's data showed processed food and accommodation prices also rose, though the gain was more than offset by a record 53.6% year-on-year plunge in telecommunication fees as cellphone carriers cut charges.