GANGNEUNG/SAMCHEOK, South Korea (Reuters) - For years, the crystalline blue water and soft sand of South Korea's Sacheonjin beach has been favoured by surfers and vacationers seeking a quieter experience than more crowded options on the east coast.

But Choi Jong-min, who runs a guest house Sacheonjin, was shocked when high waves washed away major portions of the beach this year, including during a typhoon in August.

"The waters have never been this close and the waves never so high for the past 12 years," Choi said at his guest house, looking out the window. "This place was famous for calm waves, but look, they're widely breaking now."

Fast economic expansion is chewing away at some of South Korea's most popular beaches, officials and residents say - a trend exacerbated by climate change, which has brought rising water levels and unpredictable weather.

Sacheonjin, in the eastern Gangwon province, is one of 43 such beaches designated as having "serious" coastal erosion as of 2020, up from 12 in 2018, according to a survey of 250 beaches by the oceans and fisheries ministry.

The eastern coastal provinces are among the hardest hit by erosion, accounting for 25 of the 43 worst-hit beaches.

"Coastal erosion has been accelerating due to the government's lack of willingness to step up beach maintenance," lawmaker Kim Tae-heum said. "It should secure and funnel more funds and take over the municipal programmes if necessary."

But during a recent visit by Reuters, the beach had narrowed to about 3 meters, pounded by waves.

As water swallowed the sand, some businesses were forced to relocate. In other spots, steep dunes as high as 5 meters formed, triggering safety concerns and disrupting tourism.

Early development plans lacked environmental protections, and the Coast Management Act of 1999 failed to protect shorelines, unlike tighter measures imposed in places like the United States and Japan, said Kim In-ho, a professor who has been leading Gangwon province's survey.

Kim chiefly blamed a coastal drive and seawall built too close to the shore, as well as a nearby breakwater, for accelerating changes to Sacheonjin's coastline.

"Those unscientifically designed structures intensified the waves and undercut sand dunes, which help mitigate erosion and storm surges," he said.

Chang Sung-yeol, a coastal engineer who works with Kim, said this year's erosion was aggravated by August's typhoon and unusually strong waves from the east northeast.

South Korea's east sea waters have risen by 3.83 millimetres per year from 1980-2020, according to the state-run Korea Hydrographic and Oceanographic Agency.

Lim Won-ik, a local official with responsibility for Sacheonjin, said almost 60% of the beach's sand has been restored since August, when erosion peaked.

Authorities plan to supply more sand and flatten beaches in all affected areas while devising long-term recovery plans, he added.

The country's busiest beach, Haeundae, in the southeastern city of Busan, lost nearly a quarter of its white sand since 2016 because of rapid coastal erosion, the ministry survey showed.

In Samcheok, just south of Sacheonjin, a 2020 study by the environment ministry concluded that the beach had shrunk to its smallest level since 2005, with piles of sand bags now it and the coastal forest.

That erosion was partly exacerbated by the construction of a floating dock designed to supply coal to a nearby power plant, and activists fear a planned breakwater at the site could cause further damage.

"We heavily rely on tourism, as people come here to swim, fish, and catch surf clams," said Ha Tae-sung, a local resident who leads protests against the power plant. "But you can't go in there anymore, clams died en masse, and it's noisy and stinks because of construction and waste." 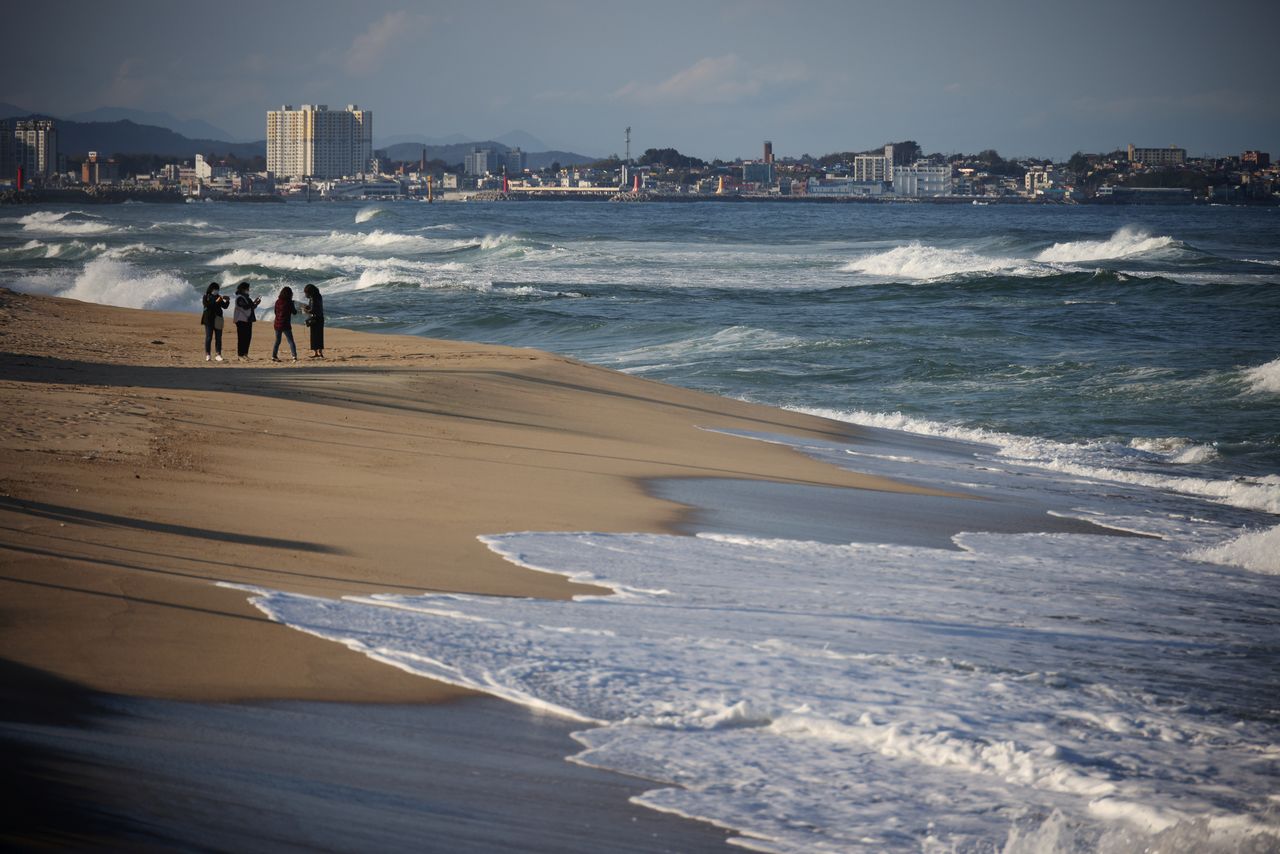 People stand at erosion-affected Sacheon beach where there used to be a long sand beach, in Gangneung, South Korea, November 3, 2021. REUTERS/Kim Hong-Ji 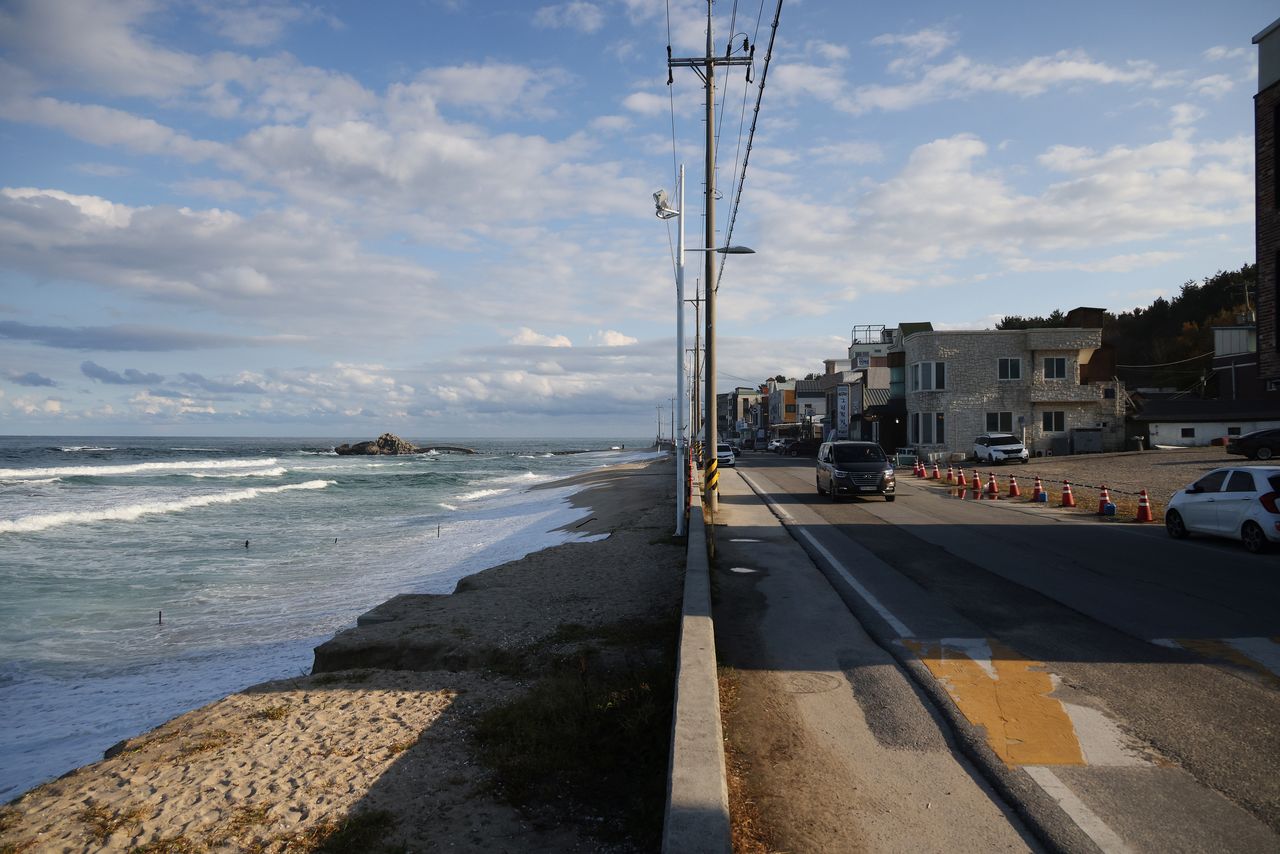 Houses, cafes and a concrete road are seen next to erosion-affected Sacheon beach where there used to be a long sand beach, in Gangneung, South Korea, November 3, 2021. REUTERS/Kim Hong-Ji 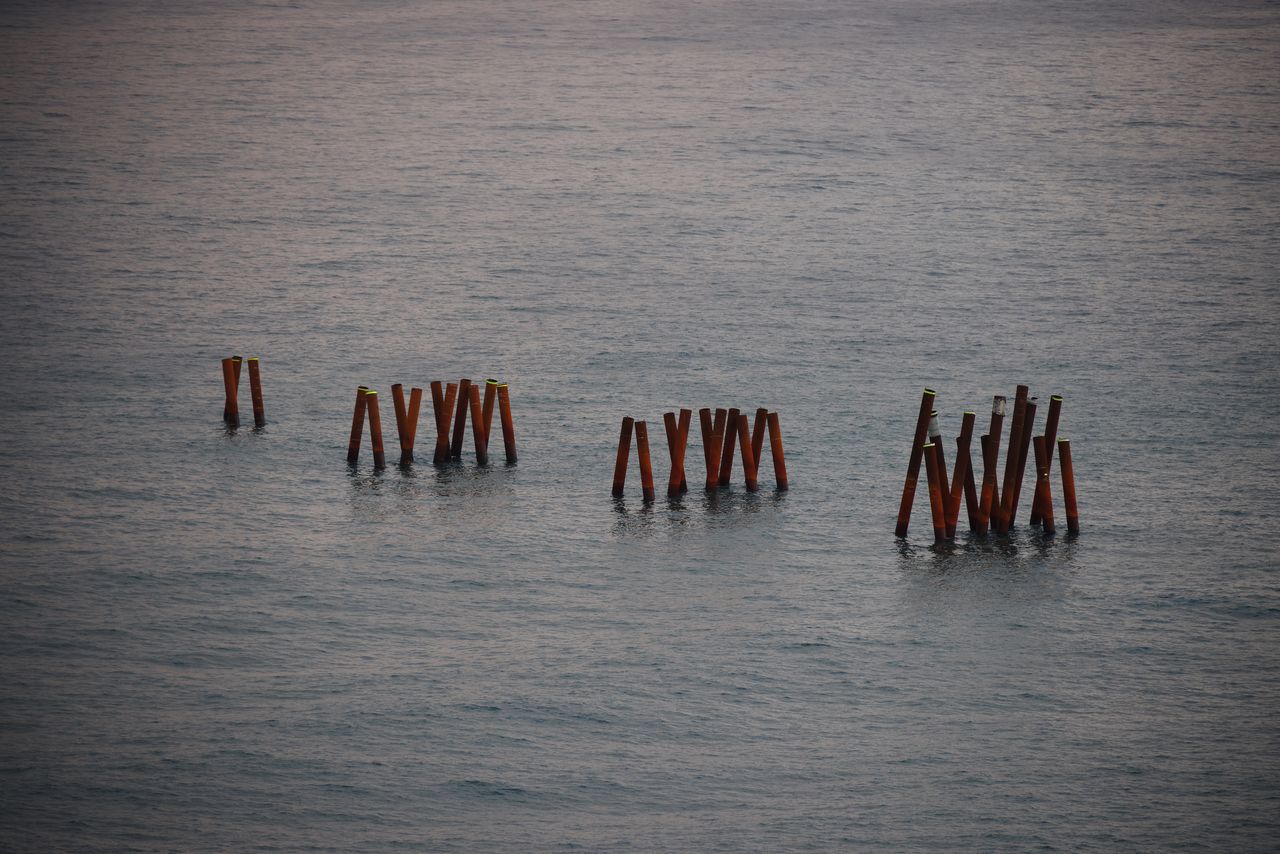 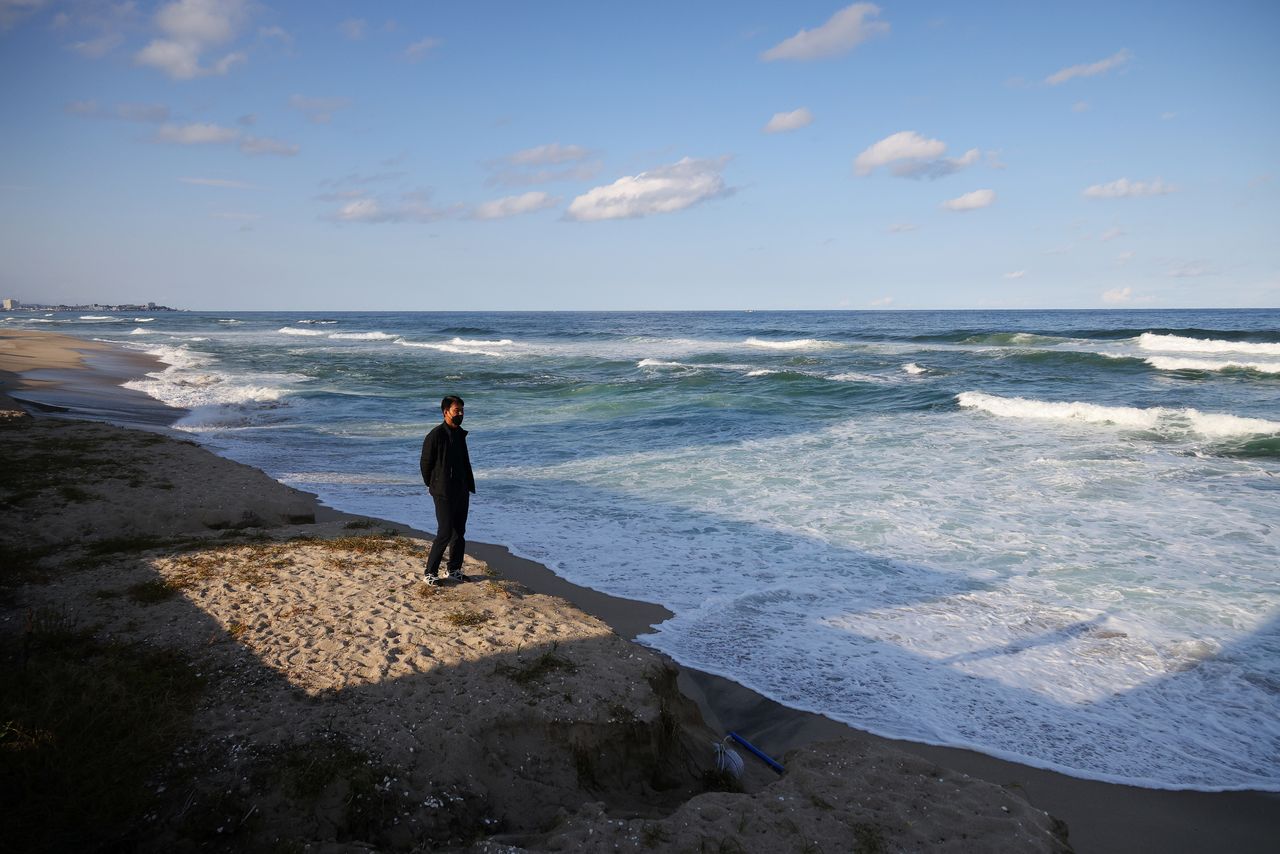 Choi Jong-min, who runs his own pension near Sacheon beach, stands in a place affected by erosion, where there used to be a long sand beach, at Sacheon beach in Gangneung, South Korea, November 3, 2021. REUTERS/Kim Hong-Ji 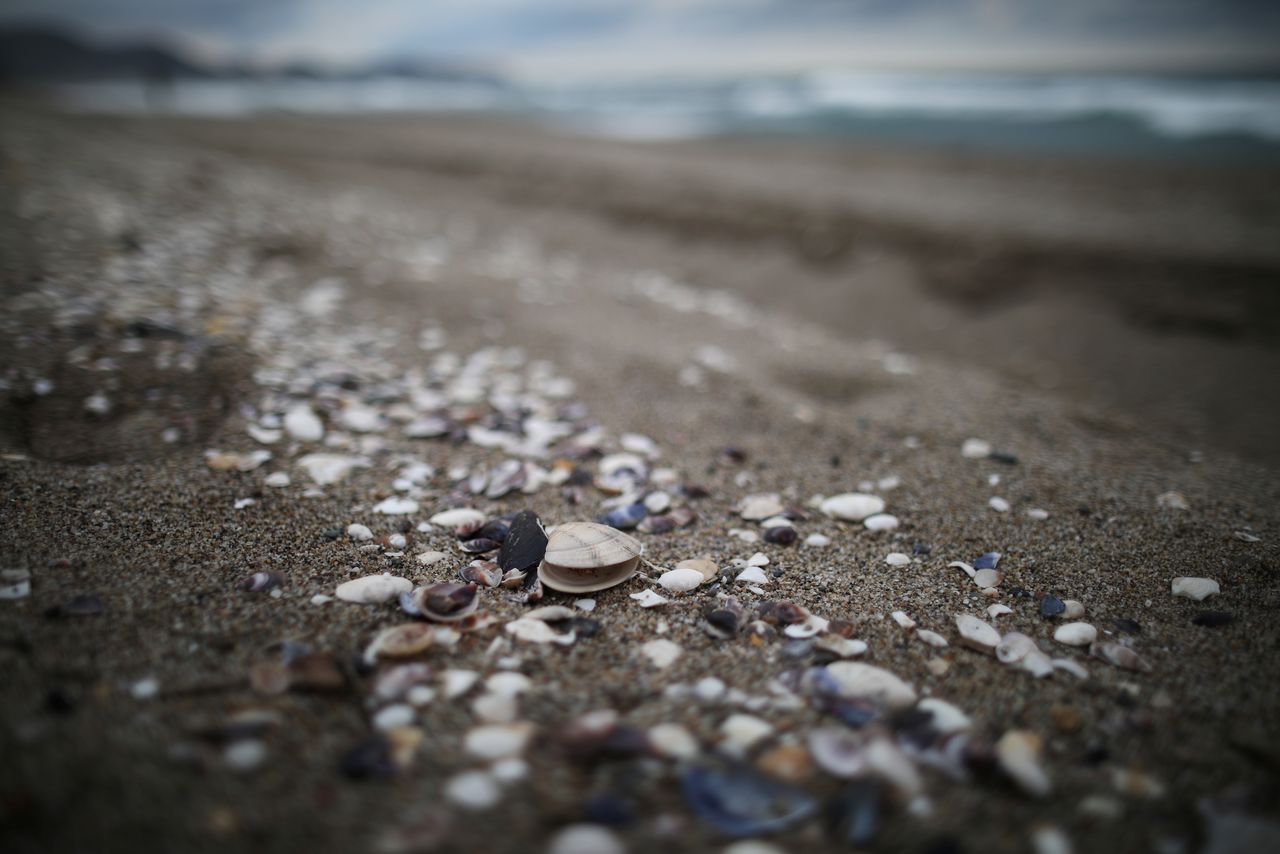