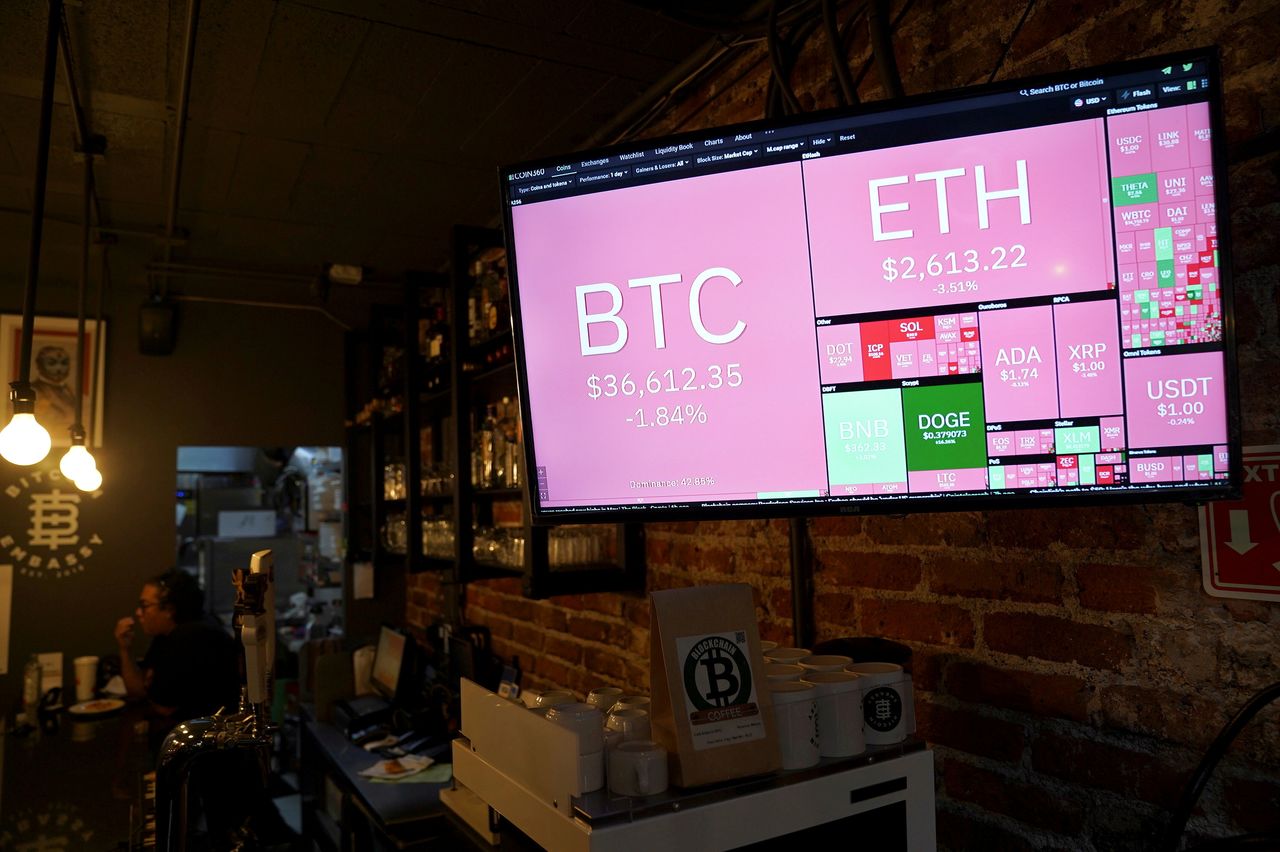 FILE PHOTO: A screen showing the fluctation of virtual cryptocurrencies Bitcoin, Ether and Doge is pictured at the Bitcoin Embassy bar in this illustration taken June 1, 2021. REUTERS/Toya Sarno Jordan/Illustration/File Photo

SYDNEY (Reuters) - Bitcoin fell to a one-month low on Friday and was headed for its worst week in six months as traders have booked profits from a long rally and been spooked by an expectation that creditors of collapsed crypto exchange Mt Gox might liquidate their payments.

The largest cryptocurrency by market value, bitcoin was down 1.6% at $55,980 by mid-session in Asia, its lowest since mid-October and 20% below last week's record high.

"Selling pressure has been quite constant," said Matthew Dibb, chief operating officer at Singapore-based crypto asset manager Stack Funds, who expects it could continue until the token finds support at around $53,000.

For the week, bitcoin has fallen 14% and through its 50-day moving average. It has gained more than 90% this year.

Dibb said there was profit taking and concern about more selling in the wake of a Tokyo court signing off on plans to repay creditors of Mt Gox, a crypto exchange which collapsed in 2014 after losing half a billion dollars in bitcoin.

"Those affected will receive a large sum of bitcoin, likely happening in Q1 or Q2 of 2022. This has brought some fear into the market on a longer term horizon," he said, on the expectation that those creditors are likely sellers.

Ether, the second largest cryptocurrency by market value, was steady near a three-week low at $4,014 on Friday but set for a 14% weekly loss.

Both ether and bitcoin also seem to have suffered as the mood in global markets has been cautious over recent days amid concerns about economic growth, interest rates and inflation.

"But the waters over the next few months will be rough as institutional investors look to see if the Fed will be forced to raise rates sooner and trigger a broad-based selloff of risky assets that include bitcoin."