A former military commander, Chun presided over the 1980 Gwangju army massacre of pro-democracy demonstrators, a crime for which he was later convicted and received a commuted death sentence.

Chun passed away at his Seoul home early in the morning and his body was moved to a hospital for a funeral later in the day.

He was sufferig from multiple myeloma, a blood cancer which was in remission, and his health had deteriorated recently, his former press secretary Min Chung-ki told reporters.

President Moon Jae-in's office offered condolences to Chun's family but expressed regret over his failure to reveal the truth and provide apologies. It had no plan to send flowers or an official to his funeral home, Moon's spokeswoman said.

Chun's death came about a month after coup co-conspirator and succeeding President Roh Tae-woo https://www.reuters.com/world/asia-pacific/south-koreas-former-president-roh-tae-woo-dies-88-yonhap-2021-10-26, who played a crucial but controversial role in the country's troubled transition to democracy, died at age 88.

An aloof, ramrod-straight Chun during his mid-1990s trial defended the coup as necessary to save the nation from a political crisis and denied sending troops into Gwangju.

"I am sure that I would take the same action, if the same situation arose," Chun told the court.

Chun was born on March 6, 1931, in Yulgok-myeon, a poor farming town in the southeastern county of Hapcheon, during Japanese rule over Korea.

He joined the military straight out of high school, working his way up the ranks until he was appointed a commander in 1979. Taking charge of the investigation into the assassination of President Park Chung-hee that year, Chun courted key military allies and gained control of South Korea's intelligence agencies to headline a Dec. 12 coup.

"In front of the most powerful organisations under the Park Chung-hee presidency, it surprised me how easily (Chun) gained control over them and how skilfully he took advantage of the circumstances. In an instant he seemed to have grown into a giant," Park Jun-kwang, Chun's subordinate during the coup later told journalist Cho Gab-je.

Chun's eight-year rule in the presidential Blue House was characterised by brutality and political repression. It was, however, also marked by growing economic prosperity.

Chun resigned from office amid a nationwide student-led democratic movement in 1987 demanding a direct electoral system.

In 1995, he was charged with mutiny, treason and was arrested after refusing to appear at the prosecutors' office and fleeing to his hometown.

At what local media dubbed the "trial of the century", he and Roh were found guilty of mutiny, treason and bribery. In their verdict, judges said Chun's rise to power came "through illegal means which inflicted enormous damage on the people".

Thousands of students were believed to have been killed at Gwangju, according to testimonies by survivors, former military officers and investigators.

Roh was given a lengthy jail term while Chun was sentenced to death. However, that was commuted by the Seoul High Court in recognition of Chun's role in the fast-paced economic development of the Asian "Tiger" economy and the peaceful transfer of the presidency to Roh in 1988.

Both men were pardoned and freed from jail in 1997 by President Kim Young-sam, in what he called an effort to promote "national unity."

An association of survivors' groups said at a news conference on Tuesday that it was lamentable that Chun died without apologising for the coup and Gwangju "massacre," vowing to continue seeking the truth and "justice of history."

Chun made several returns to the spotlight. He caused a national furore in 2003 when he claimed total assets of 291,000 won ($245) of cash, two dogs and some home appliances - while owing some 220.5 billion won in fines. His four children and other relatives were later found to own large swaths of land in Seoul and luxurious villas in the United States.

Chun's family in 2013 vowed to pay off the bulk of his debt, but his unpaid fines still totalled some 100 billion won as of last December. Seoul city said last week that his unpaid taxes exceeded 980 million won.

In 2020, Chun was found guilty and received an eight-month suspended sentence for defaming a late democracy activist and Catholic priest in his 2017 memoirs. Prosecutors have appealed, and Chun had faced a trial next week.

Chun had wished to be cremated and buried near the border with North Korea, but his family would make a final decision when his youngest son, living in the United States, arrives, Min said. 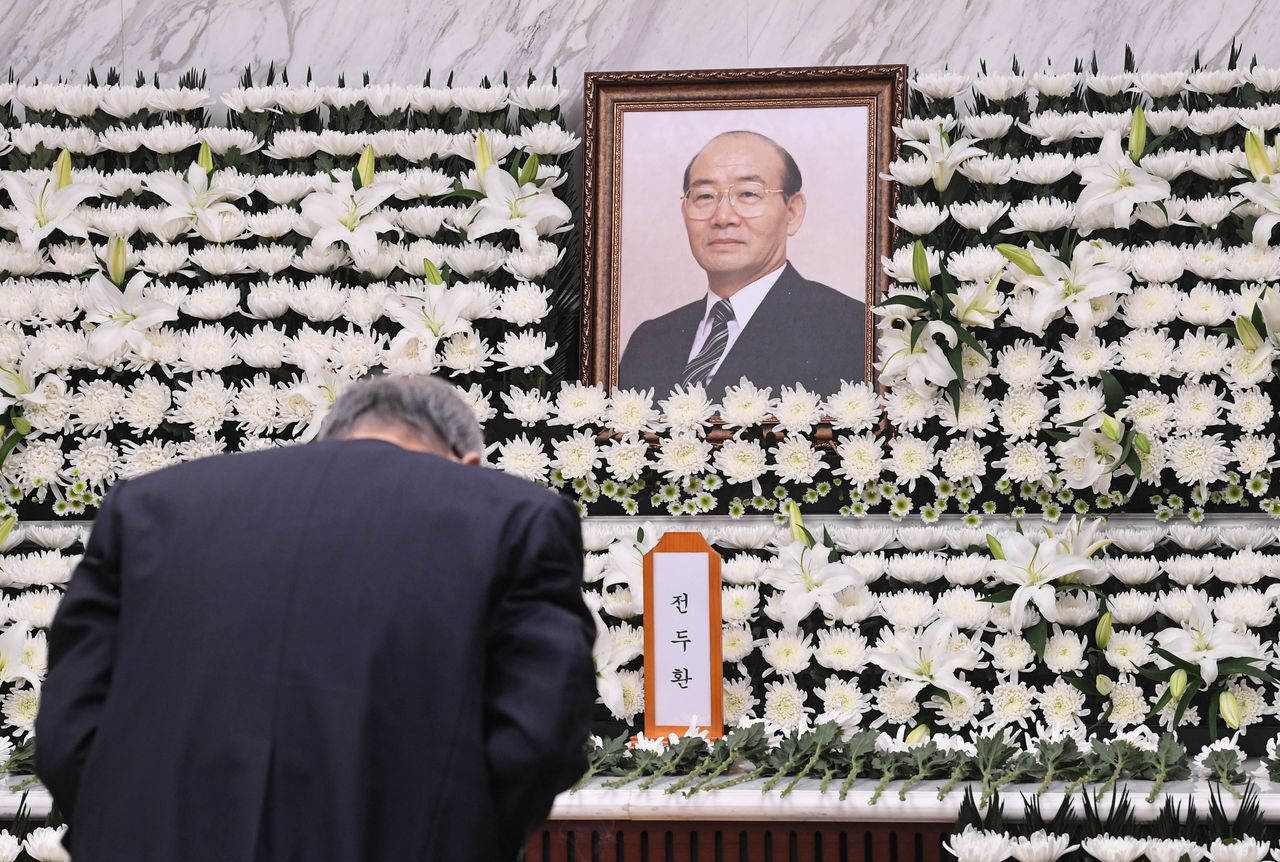 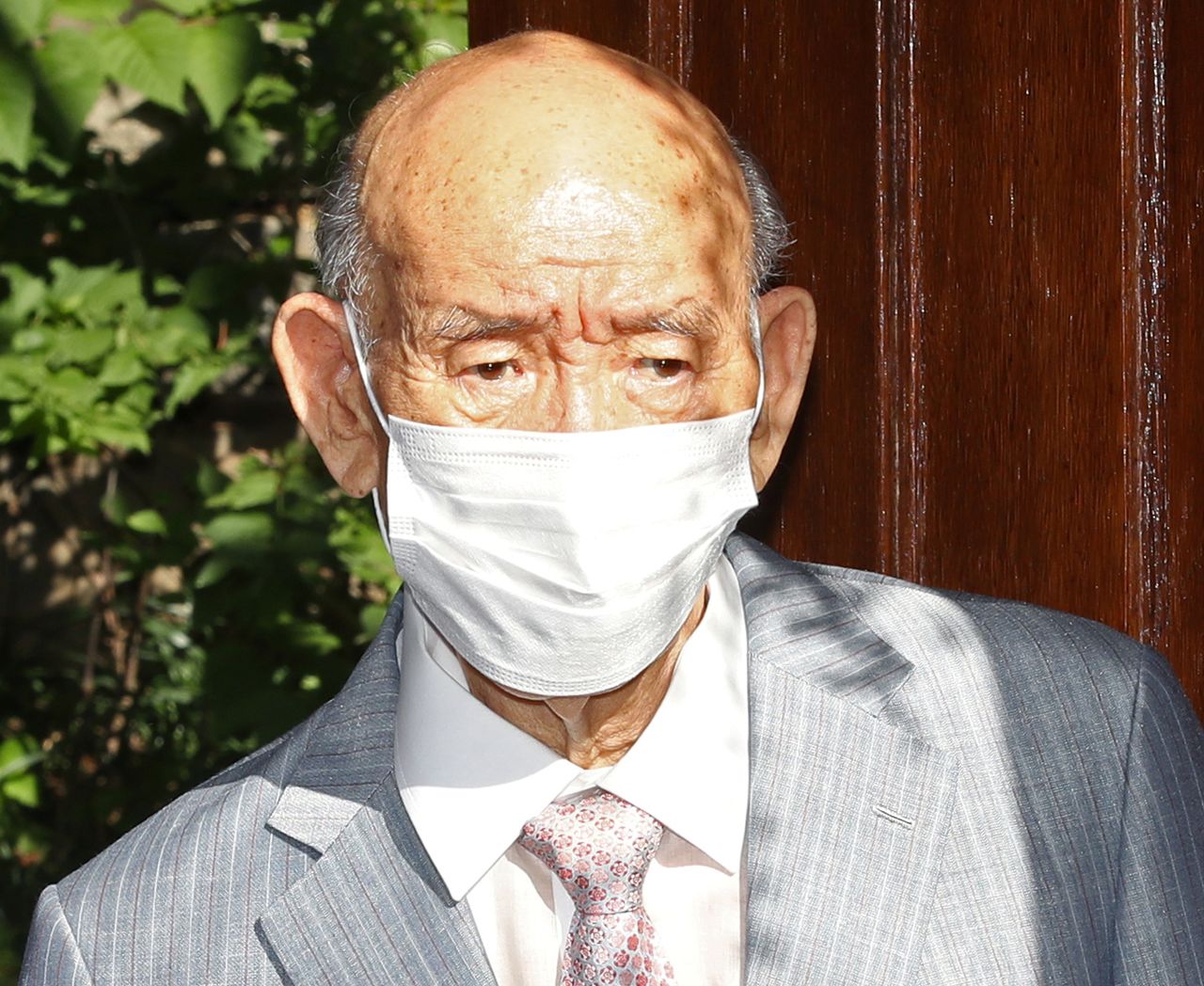 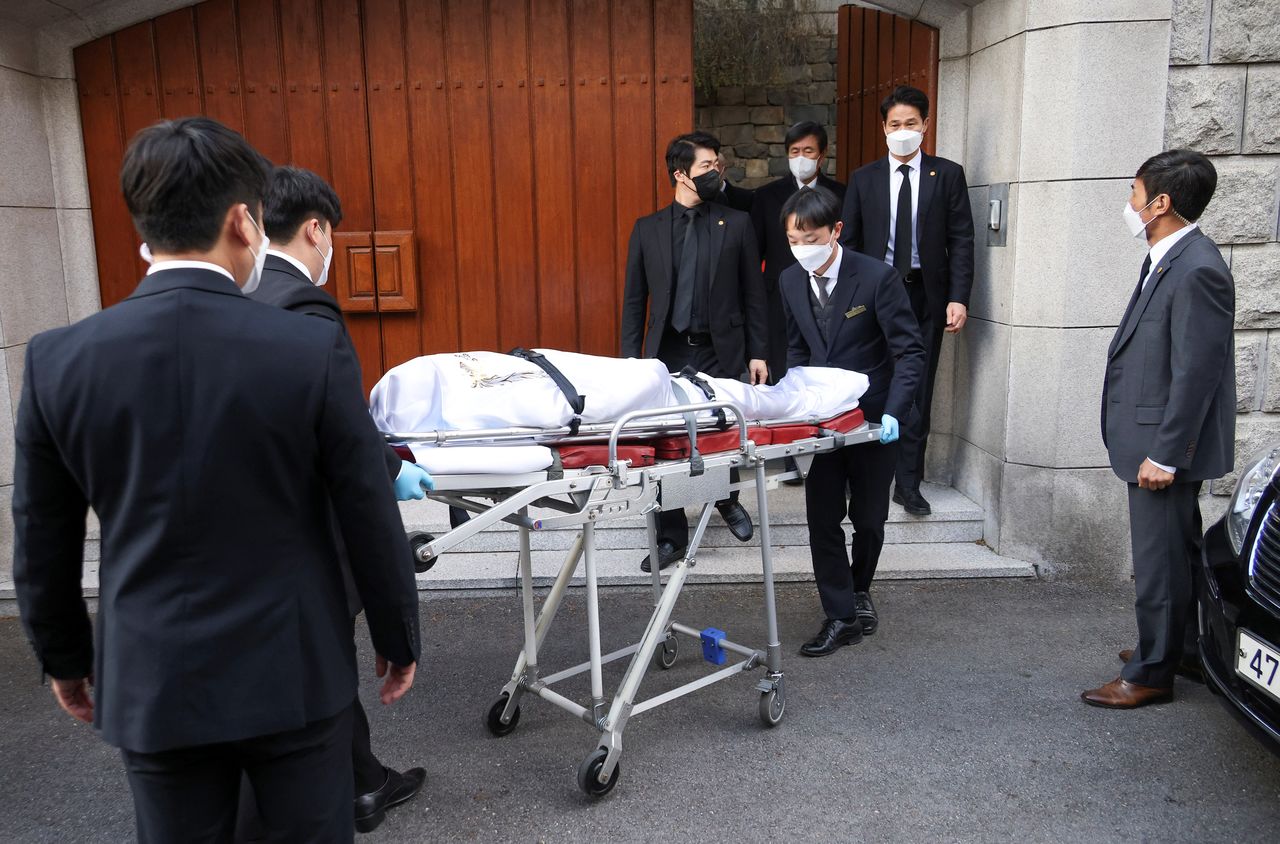 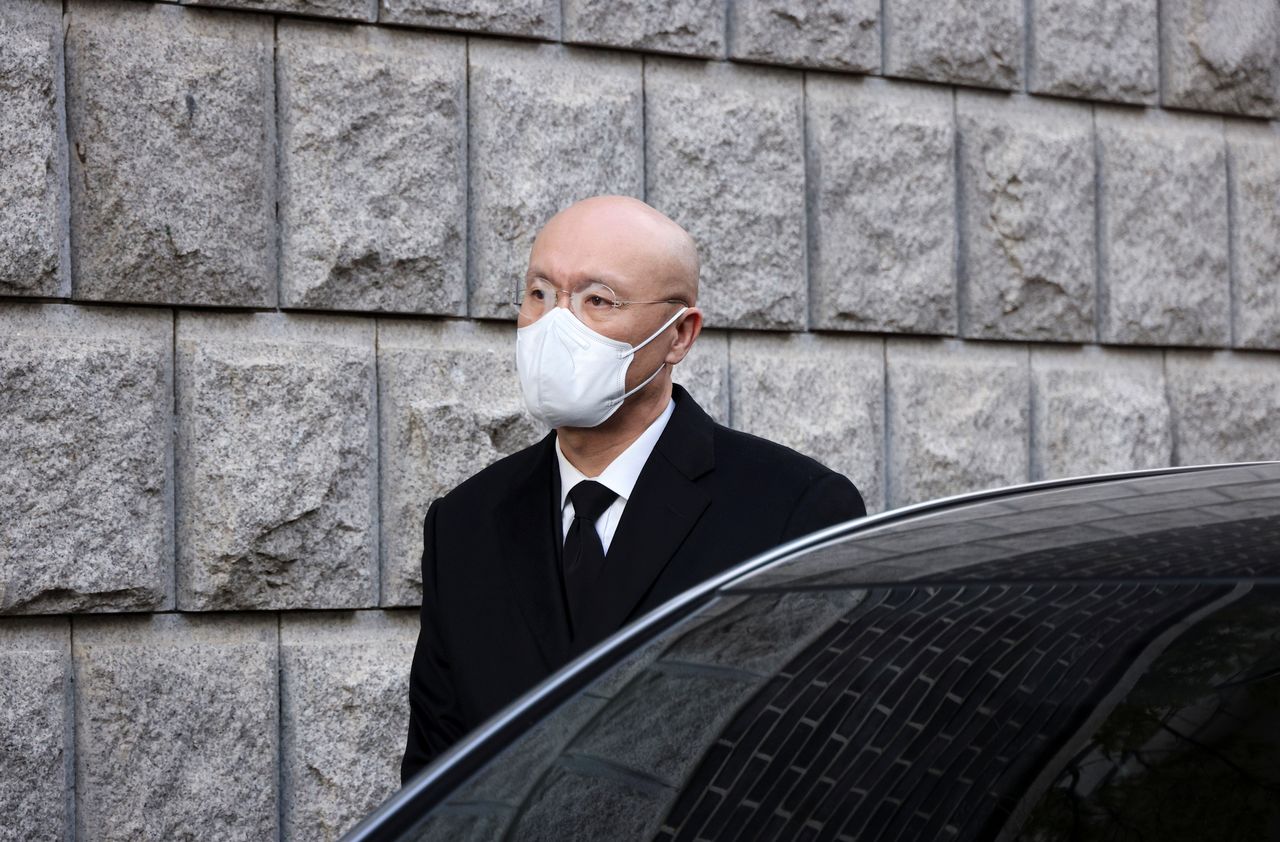 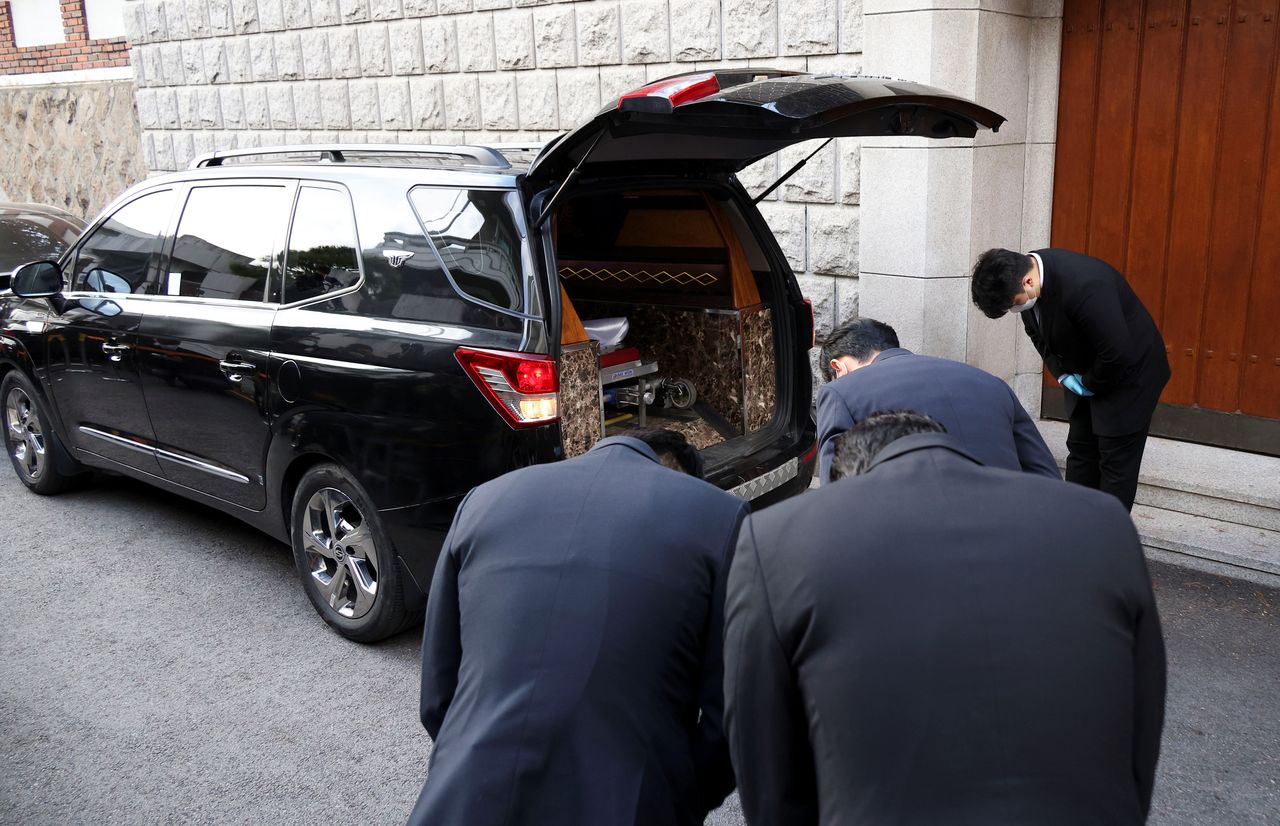 Pallbearers take a bow as the body of late former South Korean President Chun Doo-hwan, who took office following a 1979 military coup, is put into a hearse outside his home in Seoul, South Korea, November 23, 2021. REUTERS/Kim Hong-Ji