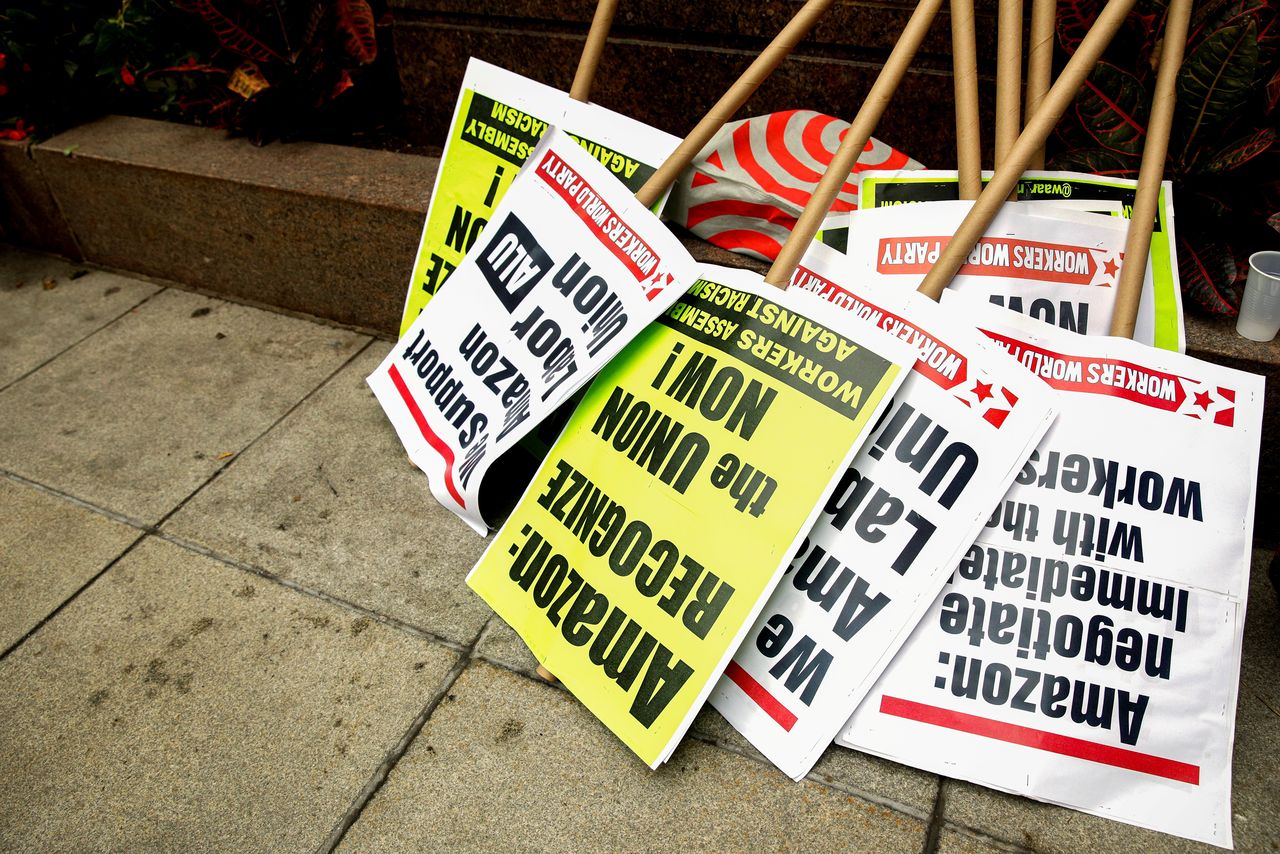 FILE PHOTO: Signs are stacked for Amazon workers before they arrive to file paperwork to unionize at the NLRB office in Brooklyn, New York, U.S., October 25, 2021. REUTERS/Brendan McDermid/File Photo

SAN FRANCISCO (Reuters) - In June, managers at location data startup Mapbox came to employees with alarming news: The company had lost a $150 million investment, and worker organizing was to blame.

Prior to the all-hands meeting over Zoom, roughly two-thirds of the SoftBank-backed startup’s eligible U.S. workers had signed cards indicating their desire to unionize, part of a wave of organizing in Silicon Valley.

But after Mapbox management disclosed the botched investment – and said they worried funding trouble would persist if workers formed a union – the tide turned, one current and one former employee said. Workers at Mapbox, which was valued at more than $1 billion in its most recent private funding round and has engaged with so-called blank check companies about going public, voted against unionization in August.

Mapbox's response offers a window into how tech companies are pushing back as unions seek to bring workers into the fold.

In recent years, the Communications Workers of America and the Office and Professional Employees International Union have launched campaigns in Silicon Valley, organizing workers at startups such as Kickstarter and Glitch. The CWA also formed the Alphabet Workers Union, a so-called minority union that does not have collective bargaining rights.

As unions continue engaging with workers, a playbook among tech companies is emerging, according to interviews with tech workers and union organizers: Warn employees about the impact a union would have on the startup’s prospects and, in particular, its ability to raise funds. Remind workers of their privilege to cast doubt on why they need a union. And hire law firms and consultants to help drive the point home.

“Tech firms are willing to do whatever is necessary to keep unions out,” said John Logan, a labor professor at San Francisco State University. “They might think unions are fine for food-processing workers or for miners, but not in the tech sector.”

The unions’ pushes are at an early stage, and it remains to be seen whether they will catch on widely. But the growing receptiveness in a sector long regarded as indifferent to organized labor speaks to a broader renegotiation of power that is playing out between tech companies and their employees, interviews with workers suggest.

For many tech workers, the promise of a generous payday is no longer enough. They also want sound working conditions and assurances that the products they are building will not harm society, tech employees and organizers say.

Yet workers at high-risk, high-reward startups are loath to jeopardize the value of their stock options, or put their jobs at risk. That is why warnings about funding can be so effective, said Wes McEnany, a senior CWA campaign lead.

In addition to Mapbox, management also said unionization could imperil future funding at Kickstarter and Glitch, according to former employees. Medium Chief Executive Ev Williams told workers that investors might shy away if the union prevailed, McEnany said.

"After considering the benefits and costs, our employees voted overwhelmingly against forming a union," Mapbox said in a statement. "It was their decision to make, and they made it unambiguously. We’re now focused on growing our business and supporting our customers."

Kickstarter and Glitch declined to comment. Williams did not respond.

Under U.S. law, companies may not threaten workers that they will lose their jobs if they unionize, but they can predict adverse consequences, said Gordon Lafer of the University of Oregon's Labor Education and Research Center.

Some investors and financial advisers interviewed by Reuters said they view unions at startups as a drawback because they make it more difficult for companies to lay off workers and introduce more rules around compensation.

Yet Roy Bahat, head of venture capital firm Bloomberg Beta, said he doubted investors would pass up the chance to invest in a hot startup because it had a unionized workforce.

"In the same way that (venture capitalists) overcome lots of obstacles to investing – everything from PR dilemmas to regulatory vulnerabilities to cofounder issues – unions are just another aspect of a company," Bahat said. "They’re not fatal."

In August, Jackson Lewis, a law firm known for its work in union avoidance, released a podcast https://www.jacksonlewis.com/event/unlikely-marriage-unions-and-tech-employees episode titled: “The Unlikely Marriage of Unions and Tech Employees.” Jackson Lewis lawyer Laura Pierson-Scheinberg said she was inspired to record the podcast by the increasing number of calls she received from tech companies inquiring about the prospect of union campaigns.

The shift to working from home has weakened ties between companies and workers, creating an opening for unions, Pierson-Scheinberg said.

Mapbox is known for its strong ties to nonprofits. But in recent years, some workers grew worried about how the mapping technology was being used by clients, one current and one former employee said.

Mapbox’s relationship with software company Palantir Technologies Inc was of particular concern, one former employee said. Workers also wanted to formalize support for colleagues in the event of future layoffs.

On their website, members of the Mapbox Workers Union wrote that they banded together "to build a lasting, accountable, inclusive Mapbox."

Mapbox management presented a variety of arguments against unionization, but funding concerns were especially resonant with workers. As management mentioned the failed investment over Zoom, several workers could be seen shaking their heads, according to one employee. Afterward, some workers who had supported the union told organizers they had had a change of heart.

The botched $150 million investment "was a very large and very scary number," one employee said. "The fear that that instilled didn’t go away."