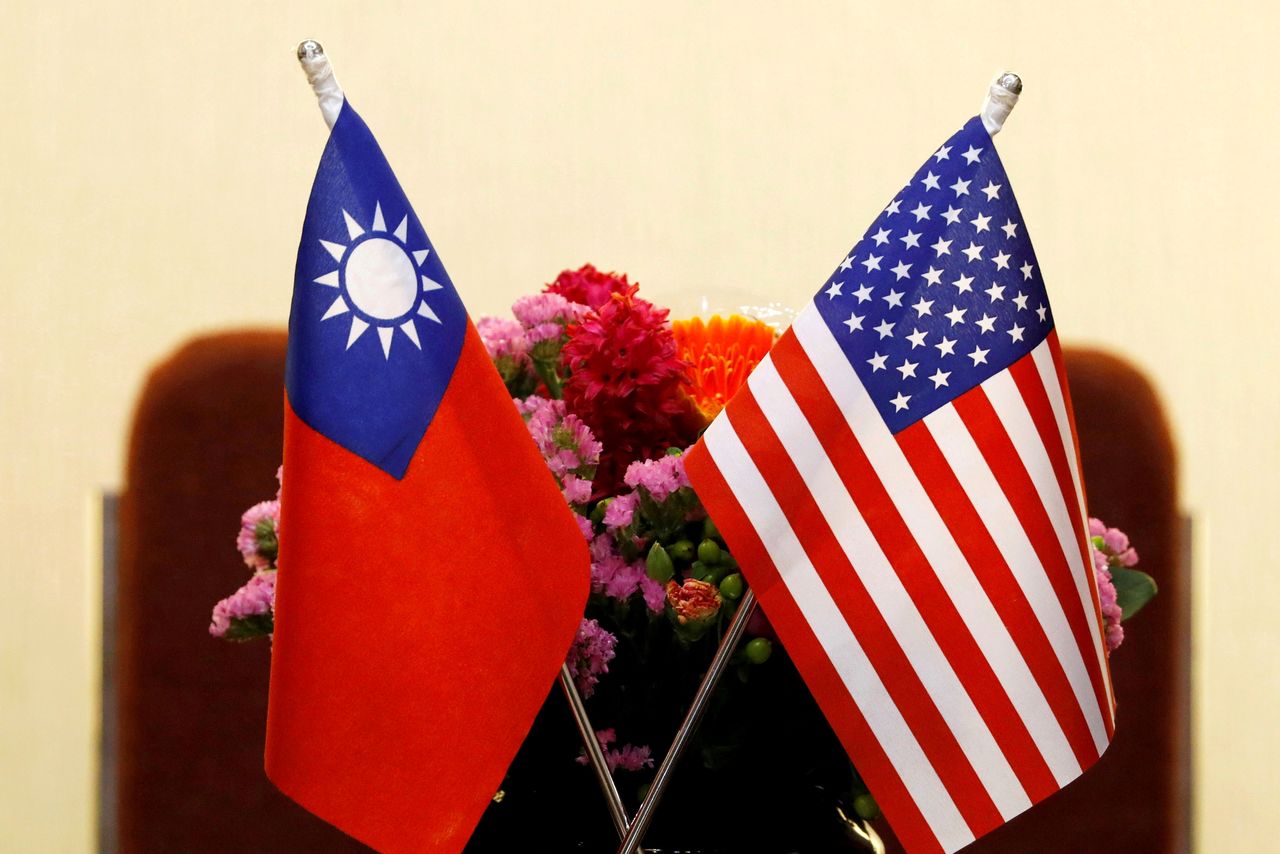 FILE PHOTO: Flags of Taiwan and U.S. are placed for a meeting in Taipei, Taiwan March 27, 2018. REUTERS/Tyrone Siu/File Photo

TAIPEI (Reuters) -China's military carried out "combat readiness" patrols in the direction of the Taiwan Strait on Friday as a U.S. Congressional delegation made a surprise visit to Taipei, offering strong support to the Chinese-claimed, democratically governed island.

The five members of the U.S. House of Representatives arrived in Taiwan on Thursday night for a previously unannounced two-day trip, the second time in a month U.S. lawmakers have visited.

As with the last visit https://www.reuters.com/world/china/china-opposes-us-legislators-visiting-taiwan-by-military-plane-state-media-2021-11-09, China's military announced the patrols in the vicinity of the narrow and sensitive Taiwan Strait that separates the island from its giant neighbour.

The People's Liberation Army's Eastern Theatre Command said that on Friday it "organised naval and air forces to continue combat readiness police patrols in direction of the Taiwan Strait".

"The relevant actions are necessary to deal with the current situation in the Taiwan Strait. Taiwan is part of China's territory, and defending national sovereignty and territorial integrity is our military's sacred mission."

It gave no details.

Taiwan's Defence Ministry, as part of its daily update of Chinese air operations near the island, said that on Friday eight Chinese air force aircraft, including two nuclear-capable H-6 bombers, flew into Taiwan's air defence zone, though well away from mainland Taiwan and close to the Taiwan-controlled Pratas Islands at the top of the South China Sea.

China routinely denounces visits by U.S. politicians to Taiwan, and its foreign ministry said it had made a formal complaint to Washington about the latest trip by the bipartisan congressional group, saying playing the Taiwan card was "a losing hand".

Meeting Taiwan President Tsai Ing-wen at her office earlier on Friday, the leader of the U.S. delegation praised the island as a "force for good" in the world.

"Madame President, I want to commend and praise your leadership. Under your administration, the bonds between us are more positive and productive than they have been for decades," said Mark Takano, chairman of the House Committee on Veterans' Affairs, whose group was previously in Japan and South Korea.

"Our commitment to Taiwan is rock solid and has remained steadfast as the ties between us have deepened. Taiwan is a democratic success story, a reliable partner and a force for good in the world," he added.

The United States, like most countries, has no official ties with Taiwan but is the democratically-ruled island's most important international backer and arms supplier.

Congresswoman Nancy Mace, who is part of the delegation, tweeted that China's Washington embassy "demanded we cancel the trip" when news of it broke.

"We didn't," she added, and posted a picture of herself outside the U.S. Air Force jet that carried her to Taipei under the caption "Just touched down in the Republic of Taiwan", a term used by supporters of the island's formal independence.

China has stepped up military and political pressure on Taiwan to accept its sovereignty claims. Tsai has vowed to maintain peace with China, but that she will defend Taiwan if attacked.