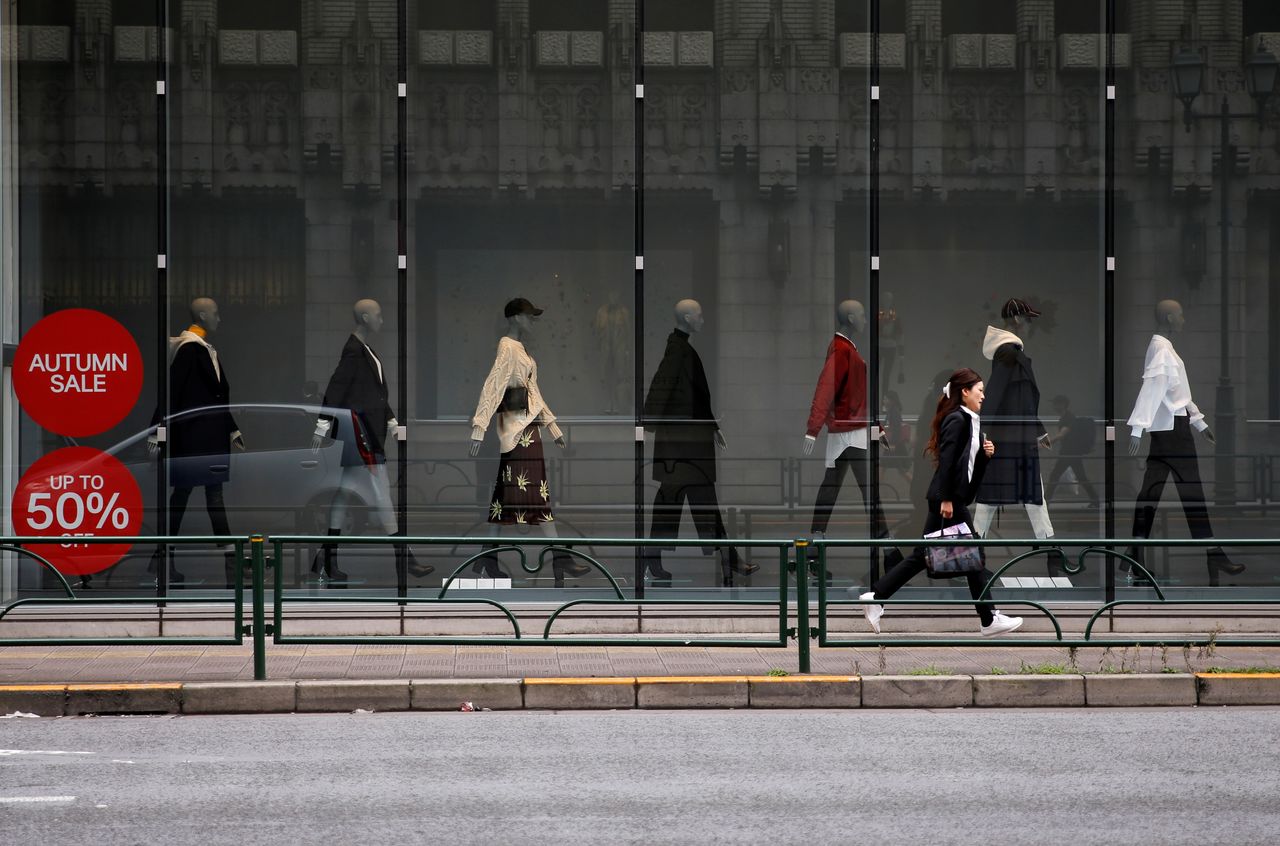 FILE PHOTO: A woman runs past a fashion boutique in a shopping district in Tokyo, Japan, September 29, 2016. REUTERS/Toru Hanai

TOKYO (Reuters) - Japan's retail sales rose for the first time in three months in October, though less than expected, and the underlying private consumption trend pointed to persistent strains on a fragile economic recovery despite an easing of COVID-19 curbs.

Following a larger-than-expected contraction in July-September, analysts expect the world's third-largest economy to rebound this quarter thanks to an upturn in household spending, while supply-side concerns still loom for export-reliant businesses.

"However, as people are still wary of another virus wave, they're not going out and spending actively," said Masato Koike, senior economist at Dai-ichi Life Research Institute, adding that stagnant wage growth is an additional headwind to fostering solid consumption growth.

Retail sales rose 0.9% in October from a year earlier, government data showed on Monday, versus the median market forecast for a 1.1% increase. It followed an upwardly revised 0.5% drop in September.

A 25.9% surge in fuel sales due to rising petroleum product prices boosted the headline retail figure, while sales of goods other than fuel fell 1.2% year-on-year. Worryingly, car sales were down 19.5% from a year earlier, the biggest monthly drop since January 2011, dragged down by supply constraints, according to a government official.

Compared with the previous month, retail sales grew 1.1% on a seasonally adjusted basis in October, following an upwardly revised 2.8% gain in September.

Japan has eased coronavirus restrictions on restaurant hours, large-scale events and border controls as infections have fallen dramatically and more than three-fourths of its population is fully vaccinated.

Private-sector statistics, however, had shown the comeback of consumer spending was gradual in October, and analysts said a full recovery in sectors hit hard by the pandemic such as face-to-face services will take longer time.

"Indeed, there are signs that consumers are finally shedding their caution as mobility only started to surpass its 2020 level in November," said Marcel Thieliant, senior Japan economist at Capital Economics. "Spending on services should finally start to recover in earnest now."

To boost Japan's lukewarm economic recovery, the government earlier this month announced a record $490 billion stimulus package, including cash payouts to households with children and subsidies to COVID-hit businesses.