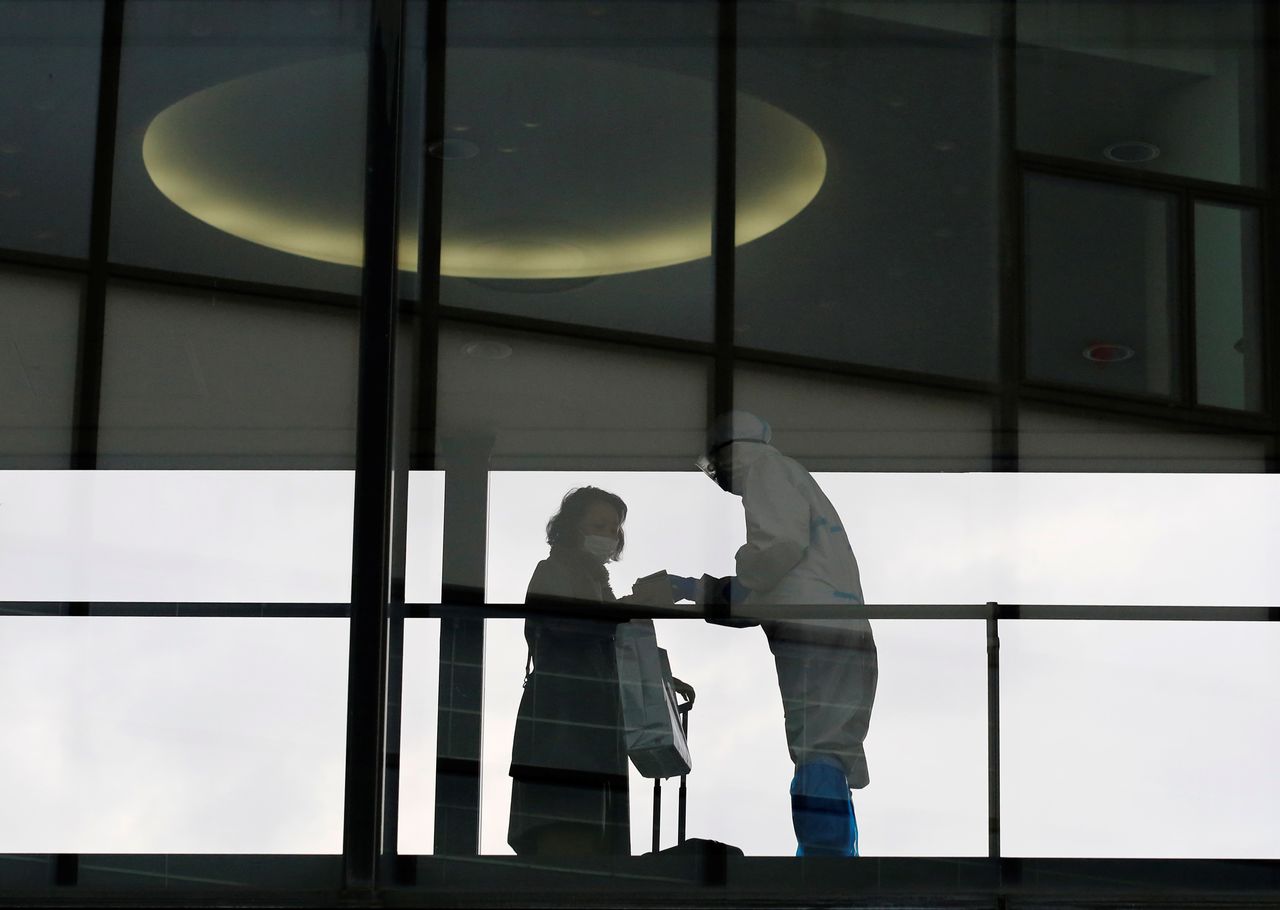 A staff wearing a protective suit checks temperature of a passenger boarding an international flight at Narita international airport on the first day of closed borders to prevent the spread of the new coronavirus Omicron variant amid the coronavirus disease (COVID-19) pandemic, in Narita, east of Tokyo, Japan, November 30, 2021. REUTERS/Kim Kyung-Hoon

TOKYO (Reuters) -Japan confirmed its first case of the Omicron variant of coronavirus on Tuesday, a day after closing its borders to all foreigners in one of the world's toughest precautionary measures.

But the case could show Prime Minister Fumio Kishida was right in making the swift closure decision, helping to avert the sort of criticism that spurred the resignation in September of predecessor Yoshihide Suga over his handling of the virus.

Chief Cabinet Secretary Hirokazu Matsuno said the discovery of the sufferer, a diplomat from Namibia in his thirties who arrived at the Japanese capital's airport of Narita, showed that border controls had worked.

"In order to avoid the worst-case situation with Omicron, we'll stay on top of the infection situation in each nation and respond flexibly and fast," he added.

Kishida had pledged to bolster Japan's response to the pandemic when he campaigned to replace Suga, whose handling of the crisis left many dissatisfied.

Border curbs were loosened slightly just weeks ago, and Kishida said he would take responsibility for all criticism of his decision to shut the country again in a move that analysts said aimed to send a strong message.

"He's saying that he's a leader who's strong in a crisis, that he can make such a decisive move," said Airo Hino, a professor of political science at Waseda University.

"The governments before him didn't restrict travel soon enough, and he's taking that into account. It's a truism of politics that how you deal with crisis can make or break a government," he added, citing a rise in support for U.S. President George W. Bush after the 9/11 attacks.

The measures, which will run at least a month from taking effect on Tuesday, were generally welcomed by the public and tolerated by business leaders.

"It's better this way for elderly citizens," said Tokiko Amemiya, an 80-year-old retiree, while one commenter on Twitter simply said, "Thanks".

Kengo Sakurada, head of the Japan Association of Corporate Executives, has called the border measures "regrettable" but said they could not be helped.

Tourism has been a pillar of Japan's economy in recent years, but despite a fall to nearly zero in the number of inbound visitors since the pandemic began last year, the economy has limped along without them.

However, over the longer term the export-dependent economy could suffer if the new variant worsens overseas demand and snarls supply lines for Japanese companies, said Kazuma Kishikawa, an economist at Daiwa Institute of Research.

"Moreover, as seen earlier in carmakers' output cuts due to the COVID-19 spread in Asian parts factories, it could disrupt supply chains," he added.

Border controls should ease as Japan's pandemic situation subsides, business lobbies have said, adding that the curbs are out of step with global standards and keep out critical employees.

New cases in Tokyo have recently fallen into the single digits.

"The Japanese government is under pressure, but we believe the current safety protocols should be more than sufficient in continuing to keep the population safe," said Michael Mroczek, chairman of the European Business Council in Japan.

The Namibian diplomat confirmed to have the Omicron variant had been vaccinated against the coronavirus, though the type of vaccine wasn't yet known, Health Minister Shigeyuki Goto told reporters. All other people on the man's flight will be treated as close contacts and tested every two days, Goto said.

It remains to be seen whether Kishida's gamble will pay off, said Waseda's Hino, adding that the sudden decision could cause problems for sectors of the economy that depend on foreign trainees.

A crucial election to Parliament's upper house comes up next summer.

"I think chances are good it will help him out, though it may not appear in opinion polls right away," Hino said.