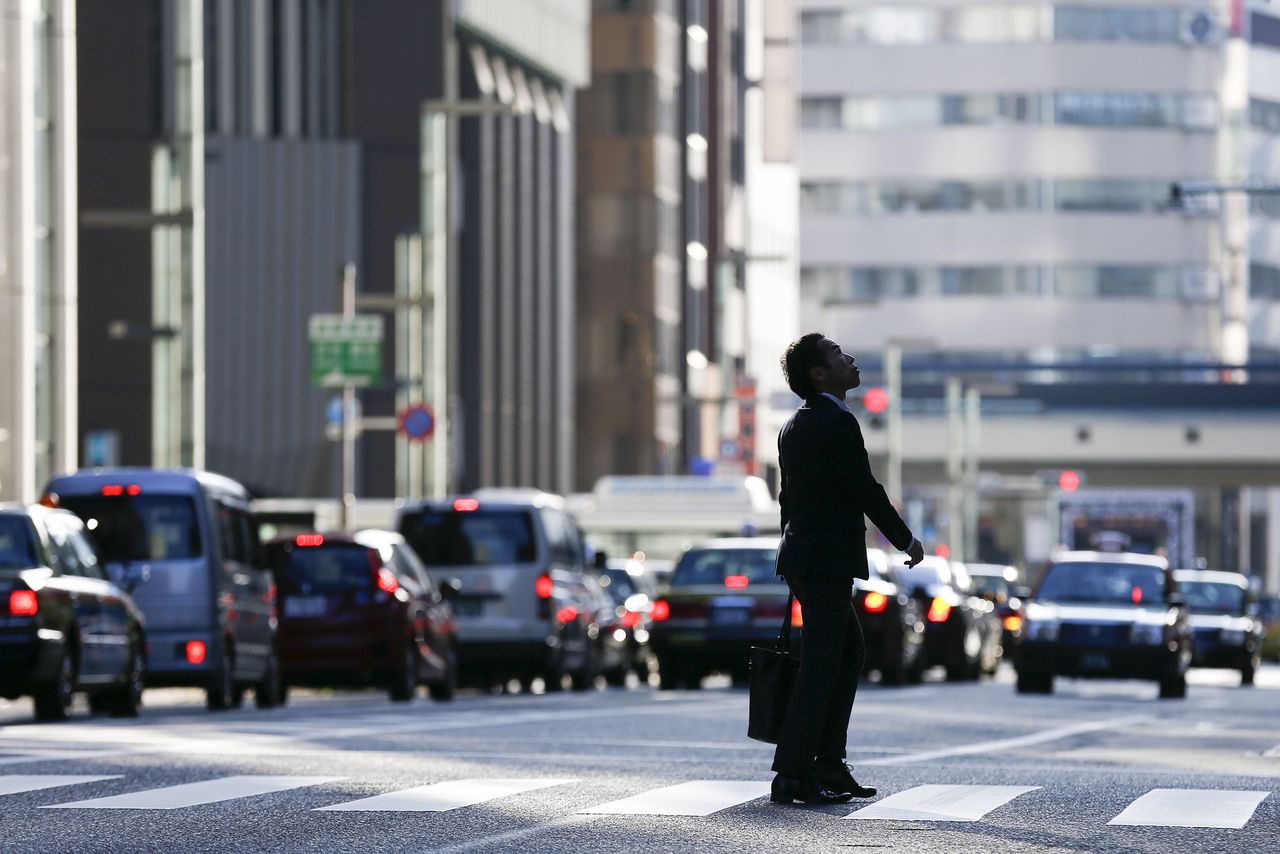 FILE PHOTO: A businessman looks up as he crosses a street in a business district in central Tokyo, Japan, December 8, 2015. Japan's economy dodged recession in the third quarter with the initial estimate of a contraction revised to an annualised expansion of 1.0 percent, offering a glimmer of hope for policymakers struggling to end years of stagnation. REUTERS/Thomas Peter

(This Nov 30 story corrects to nearly two, not three years, in first paragraph)

TOKYO (Reuters) - A panel of Japanese economists tasked with determining the peaks and troughs of Japan's business cycles said the COVID-19 pandemic brought an end to nearly two years of economic downturn.

The government-established panel provisionally declared on Tuesday that the economy ended its latest recession and entered a boom in May 2020, when early coronavirus restrictions hit households and businesses.

The health crisis shock technically marked the end of the downturn period as most indicators fell to a point where they were not declining anymore, which the panel defined as the trough.

"We agreed that May 2020 marked the economy's trough ... when consumption and many other economic indicators plummeted" amid state of emergency curbs, said Hiroshi Yoshikawa, president of Rissho University who chairs the panel convened by the Cabinet Office.

The panel, similar to the business cycle dating committee in the United States' National Bureau of Economic Research, discusses official business cycle chronology based on changes in 10 economic indicators such as industrial output, exports, retail sales and job availability.

The American counterpart announced in July that the U.S. economy hit the latest bottom in April 2020 to mark the shortest recession on record of two months.

With Tuesday's announcement, the previous recession likely lasted for 19 months until May last year, and Japan has been on an economic boom, the panel said.

"These business cycle peaks and troughs are mechanically defined" based on government statistics, and "it's another matter how the Japanese economy has been doing," Yoshikawa told reporters after the panel meeting, referring to economic contractions in first and third quarter this year.

The world's third-largest economy is expected to grow an annualised 5.1% this quarter after a larger-than-expected 3.0% contraction in July-September, a Reuters poll of analysts found, as household spending is forecast to pick up amid eased restrictions.