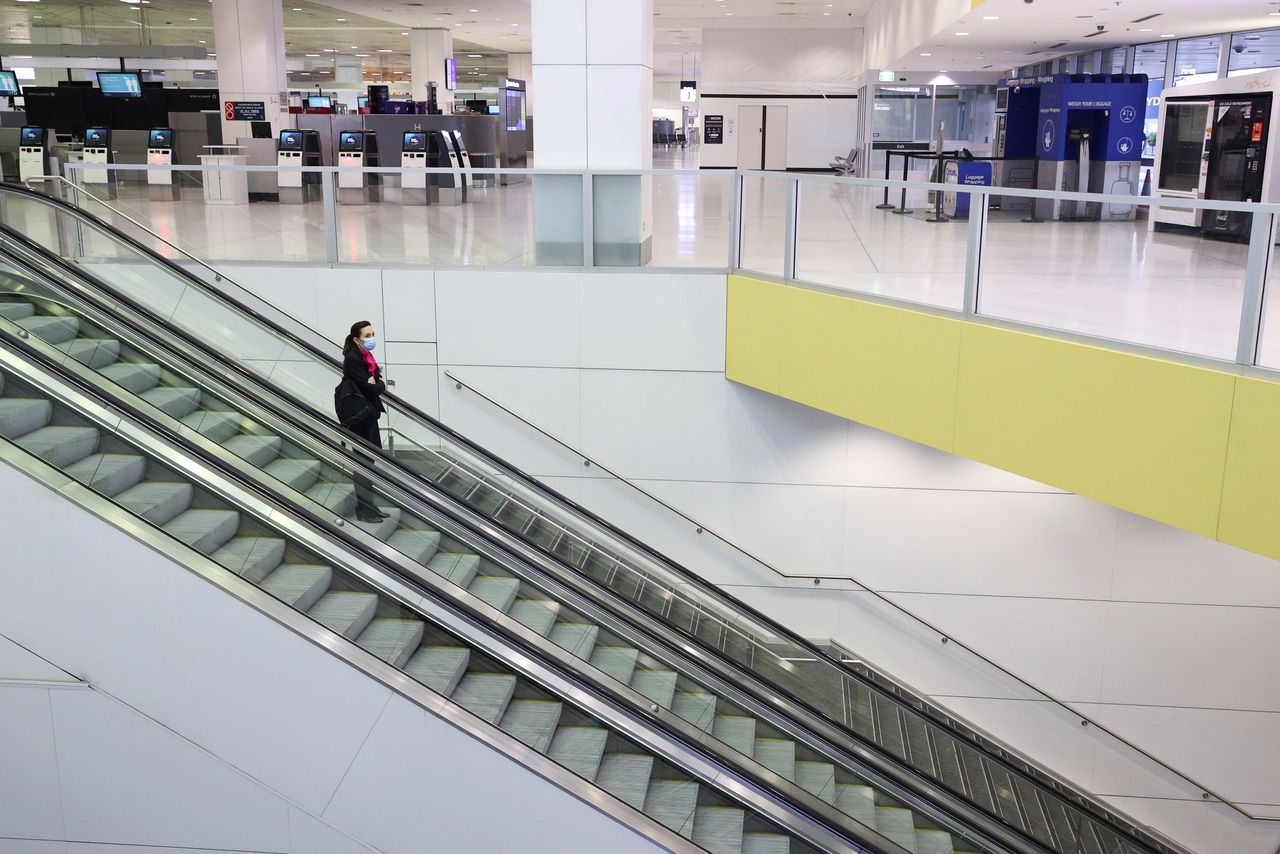 FILE PHOTO: A flight crew member stands on an escalator in the international terminal at Sydney Airport, as countries react to the new coronavirus Omicron variant amid the coronavirus disease (COVID-19) pandemic, in Sydney, Australia, November 30, 2021. REUTERS/Loren Elliott

LONDON (Reuters) - The chief executive of drugmaker Moderna set off fresh alarm bells in financial markets on Tuesday with a warning that existing COVID-19 vaccines would be less effective against the new Omicron variant than they have been against Delta.

Following, in alphabetical order, is a selected snapshot of Omicron cases and travel restrictions by country or territory, imposed in an attempt to slow the variant's spread.

Australia confirmed a person with COVID-19 had the new Omicron variant after disclosing that the person had been active in the community.

The fully vaccinated person visited a busy shopping centre in Sydney while likely infectious, officials said. The case brings Australia's total number of infections with the new variant to six.

Austria has identified a first Omicron case, the health ministry of the Alpine province of Tyrol said on Monday.

Three new Omicron cases have been confirmed in Scotland, Sky News reported on Tuesday, taking the total number of cases in Britain to 14.

Czech health authorities said they were examining a suspected case of Omicron in a person who spent time in Namibia.

Denmark has registered a total of four cases of the Omicron variant, its infectious disease authority said on Tuesday, adding that all of them were connected to "travel activity" in South Africa.

Forty-two cases of the Omicron variant have been confirmed in 10 EU countries, the head of the EU public health agency said on Tuesday.

Authorities in the 27-nation EU were analysing another six "probable" cases, Andrea Ammon, who chairs the European Centre for Disease Prevention and Control, told an online conference organised by the EU's Slovenian presidency.

She said the confirmed cases were mild or without symptoms, although in younger age groups.

Two cases of Omicron were detected in the southern state of Bavaria and a suspected case was found in the west of the country, health officials said on Saturday.

The National Health Institute said a case of the new variant had been detected in Milan in a person coming from Mozambique.

The Omicron variant was detected in the Netherlands before two flights arrived from South Africa last week carrying the virus, Dutch health officials said on Tuesday.

At least 14 people on flights from Johannesburg and Capetown arrived at Amsterdam's Schiphol airport on Nov. 26 carrying the new variant, the National Institute for Public Health (RIVM) said.

"We have found the Omicron coronavirus variant in two test samples that were taken on Nov. 19 and Nov. 23," the RIVM said.

"It is not clear yet whether these people have visited Southern Africa."

One person has tested positive for the Omicron variant on the French Indian Ocean island of Reunion and six of his contacts are being tested, the government said on Tuesday.

Spain has detected its first Omicron case in a 51-year-old man who arrived from South Africa on Sunday after a layover in Amsterdam, Madrid's regional health authority said on Monday.

Two new cases of the Omicron coronavirus variant have been detected in Sweden, the Public Health Agency said on Tuesday.

The cases were detected in tests taken less than a week ago from two persons who had travelled from South Africa, the agency said in a statement.

Brazil will shut its borders to travellers arriving from six southern African countries, the chief of staff to President Jair Bolsonaro said on Friday.

Britain has barred entry to non-residents from 10 southern African states, and British and Irish residents arriving from those countries must quarantine in a government-approved hotel for 10 days.

Cambodia said on Monday it was banning entry to travellers from 10 African countries. The ban will apply to anyone with a travel history from the countries, which include Botswana, South Africa and Zambia, in the past three weeks.

Canada is closing its borders to foreign travellers who have recently been to seven southern African nations to help stop the spread of Omicron, its health minister said on Friday. CUBA

Cuba will ratchet up restrictions from Dec. 4 on passengers from certain African countries over concerns about Omicron, the government said on Monday.

Ecuador will impose entry restrictions on travellers flying from or via a number of African countries and will request vaccine certificates from those arriving from other countries, President Guillermo Lasso said on Monday.

Hong Kong has banned non-residents from entering the city from four African countries and plans to expand that to travellers who have been to Australia, Canada, Israel and six European countries in the past 21 days due to fears over Omicron.

India will make on-arrival COVID-19 testing mandatory for air travellers from more than a dozen countries, including South Africa and Britain where the Omicron variant has been detected, the health ministry said on Monday.

The decision, effective Dec. 1, came after a man who returned from South Africa tested positive for COVID-19, though it is not yet clear which variant of the virus he contracted.

Ireland will require all arrivals to have proof of a negative COVID-19 test - regardless of their vaccination status - to slow the potential spread of the new Omicron coronavirus variant, a government source said on Tuesday.

Ireland is studying 11 suspected Omicron cases after initial tests showed they had a trait distinct from the dominant Delta variant. Health Minister Stephen Donnelly said it is likely the new variant is present in the country.

Israel on Saturday became the first country to shut its borders completely in response to Omicron, and said it would use counter-terrorism phone-tracking technology in order to contain the variant's spread.

Japan said on Monday it would shut its borders to foreigners from midnight to prevent a spread of the Omicron variant there.

Japanese returnees from a number of specified nations will have to quarantine in designated facilities, Prime Minister Fumio Kishida told reporters.

"These are temporary, exceptional measures that we are taking for safety's sake until there is clearer information about the Omicron variant," Kishida said.

Paraguay has imposed a travel ban on foreigners from 10 African countries.

Poland said on Monday it would ban flights to seven African countries, extend the quarantine period for some travellers and reduce limits on numbers allowed into places like restaurants.

The U.S. Centers for Disease Control and Prevention (CDC) and the State Department on Saturday advised against travel to eight southern African countries.

The White House earlier said it would bar nearly all foreign nationals who have been in any of eight countries within the last 14 days from flying to the United States effective Monday.