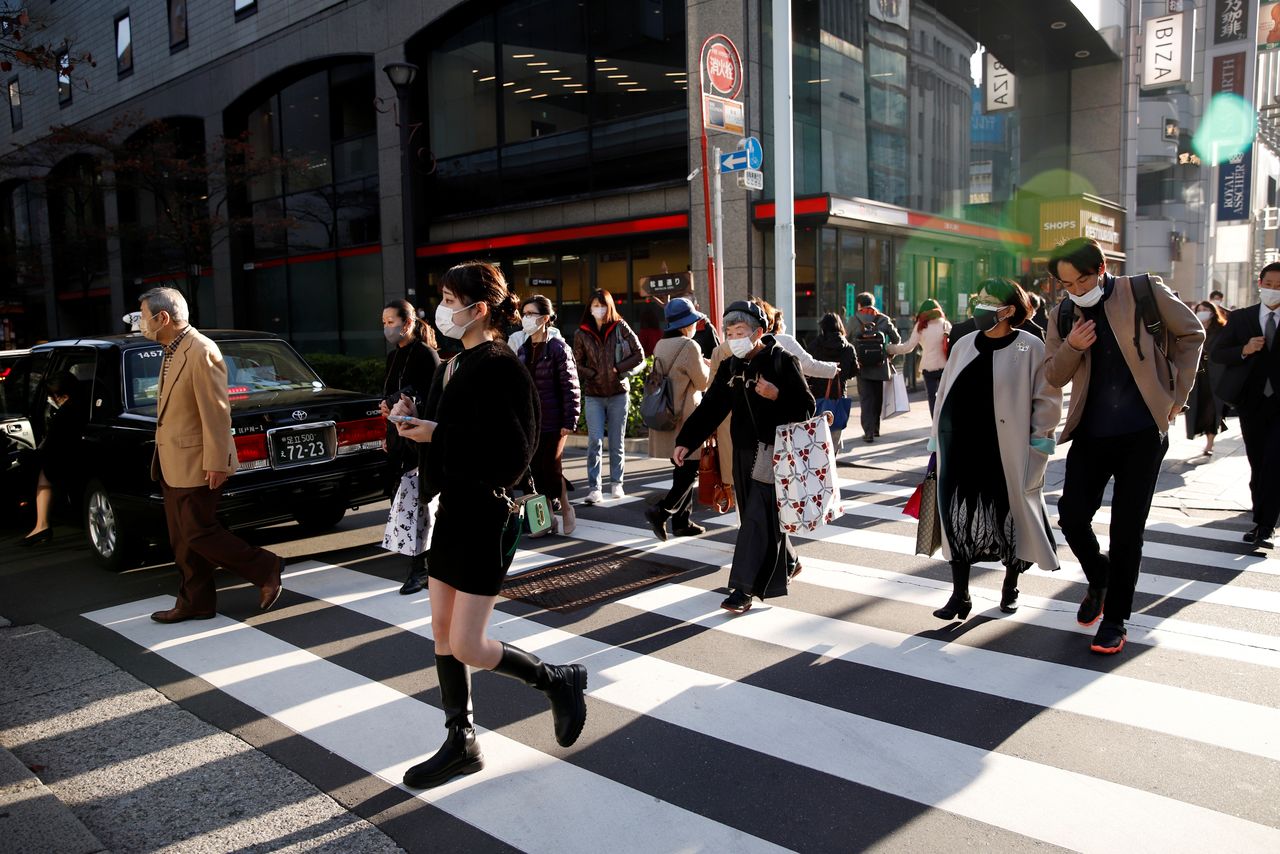 People cross the street in the Ginza shopping area, on the first day of Japan's closed borders to prevent the spread of the Omicron variant of coronavirus, in Tokyo, Japan November 30, 2021. REUTERS/Androniki Christodoulou/file photo

Air travellers to the United States will face tougher COVID-19 testing rules and other countries tightened border controls on Wednesday to try to slow the spread of the Omicron variant.

Japan's flagship airlines halted new reservations on Wednesday and the government widened a travel ban after a second case of the Omicron variant was detected in the country.

Malaysia has temporarily banned the entry of travellers from countries that have reported the Omicron variant or are considered high-risk, its health minister said on Wednesday.

The European Union needs daily reviews of its travel restrictions and rapid deployment of vaccine booster doses to limit entry and protect its citizens from Omicron, the European Commission said on Wednesday.

Prime Minister Boris Johnson issued a "call to get jabs in arms" on Wednesday as Britain stepped up its COVID-19 booster programme to fend off Omicron.

Norway has identified its first two cases of the Omicron variant. The two people who were infected had been on a trip to South Africa.

Australian authorities on Wednesday flagged another probable case of the Omicron variant in Sydney as they braced for more infections after at least two international travellers visited several locations in the city while likely infectious.

China detected 91 domestically transmitted COVID-19 cases with confirmed symptoms for Tuesday, marking the highest daily count since Nov. 2 and a significant jump from 21 cases a day earlier, as the country fights a fresh outbreak in the north.

All of the 91 local symptomatic cases were reported in the northern Chinese region of Inner Mongolia, data from the National Health Commission showed on Wednesday.

Germany reported the highest number of COVID-19 deaths since mid-February on Wednesday as hospitals said the country could have 6,000 people in intensive care by Christmas, above the peak of last winter.

The Robert Koch Institute, Germany's state infectious disease agency, reported 67,186 new cases on Wednesday, up 302 from a week ago, and 446 deaths - the highest daily figure since Feb. 18, bringing the overall death toll to 101,790.

Singapore's COVID-19 vaccination rate has risen to 96% of the eligible population and authorities are now racing ahead to administer booster shots.

The health ministry of the city-state, which has among the highest vaccination rates in the world, said late on Tuesday that it had updated the official vaccination rate to account for a small drop in the population.

Fiji reopened its border to international travellers for the first time in nearly two years on Wednesday, as the Pacific Island country seeks to revive its dominant tourism industry.

Fiji shut its border to all foreign nationals in March 2020 to curb the spread of COVID-19 to prevent its limited medical facilities being overrun.