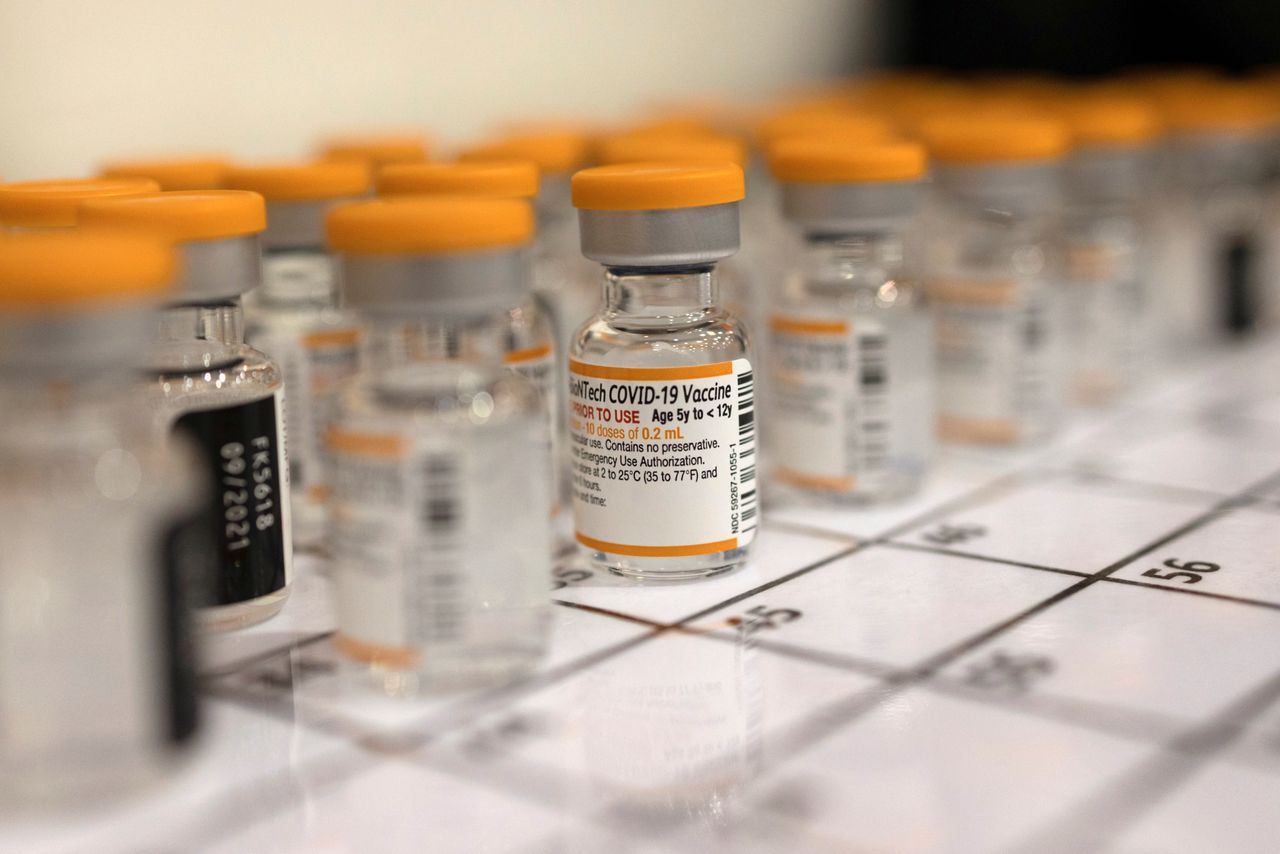 By Ludwig Burger and Michael Erman

(Reuters) -BioNTech and Pfizer said on Wednesday a three-shot course of their COVID-19 vaccine was able to neutralise the new Omicron variant in a laboratory test, an early signal that booster shots could be key to protection against infection from the newly identified variant.

The German and U.S. companies said two doses of their vaccine resulted in significantly lower neutralising antibodies but could still be protective against severe disease.

The companies also said they could deliver an upgraded vaccine targeted specifically at the Omicron variant in March 2022 if one is needed.

BioNTech and Pfizer are the first manufacturers of a COVID vaccine to issue an official update on the efficacy of their shot against Omicron.

In samples of blood taken around a month after the third shot the Omicron variant was neutralised about as effectively as two doses neutralised the original virus identified in China.

The Omicron variant, first detected in southern Africa and Hong Kong last month, has triggered global alarm about another surge in infections. Cases have already been reported from Japan to the United States and across Europe.

"The new data from Pfizer on vaccine effectiveness against Omicron is encouraging," U.S. President Joe Biden tweeted on Wednesday. "Anyone who is eligible and has not been boosted should go get a booster today."

BioNTech CEO Ugur Sahin suggested that countries might consider shortening the time period between second and third doses of the vaccine to combat the new variant.

He cited recent moves by countries including Britain to bring the third shot forward to three months after the second shot, from six months previously.

"We believe this is the right way to go particularly if the Omicron is now spreading further, to enable a better level of protection in the winter season," Sahin said.

Dr. Walter Orenstein, a professor at Vanderbilt and former director of the U.S. CDC's immunization programs, said he found the data encouraging because it suggests that the current vaccines are still usable against the Omicron.

"We may not have to change the vaccine," he said. "We may be able to get by with the current vaccine, at least for repression of severe disease."

The World Health Organization classified Omicron on Nov. 26 as a "variant of concern" but said there was no evidence to support the need for new vaccines specifically designed to tackle the variant and its mutations.

Nevertheless, the companies said they would continue efforts to bring an Omicron-specific COVID-19 vaccine to market. Work started on Nov. 25.

Pfizer and BioNTech's findings are broadly in line with a preliminary study published by researchers at the Africa Health Research Institute in South Africa on Tuesday, which said Omicron could partially evade protection from two doses of the Pfizer/BioNTech vaccine and suggested a third shot might help fend off infection.

Research on the new variant is still at an early stage. Laboratory analysis at University Hospital Frankfurt in Germany found the ability to mount an antibody response to Omicron in people who had three shots was up to 37 times lower than the response to Delta.

Even so, two shots of the vaccine may still protect against severe disease, Pfizer and BioNTech said.

The vast majority of surface structures on the Omicron spike protein targeted by the T-cells, which typically emerge after vaccination, are not affected by Omicron's mutations, they said.

T-cells are the second pillar of an immune response, alongside antibodies, and are believed to prevent severe disease by attacking infected human cells.

For their analysis, the two companies used a virus that was bio-engineered to have the hallmark mutations of Omicron, known as a pseudovirus, and blood was collected from subjects three weeks after a second vaccine dose or one month after a third.

There is no significant data yet on how vaccines from Moderna, Johnson & Johnson and other drugmakers hold up against the new variant but they are expected to release their own data within weeks.