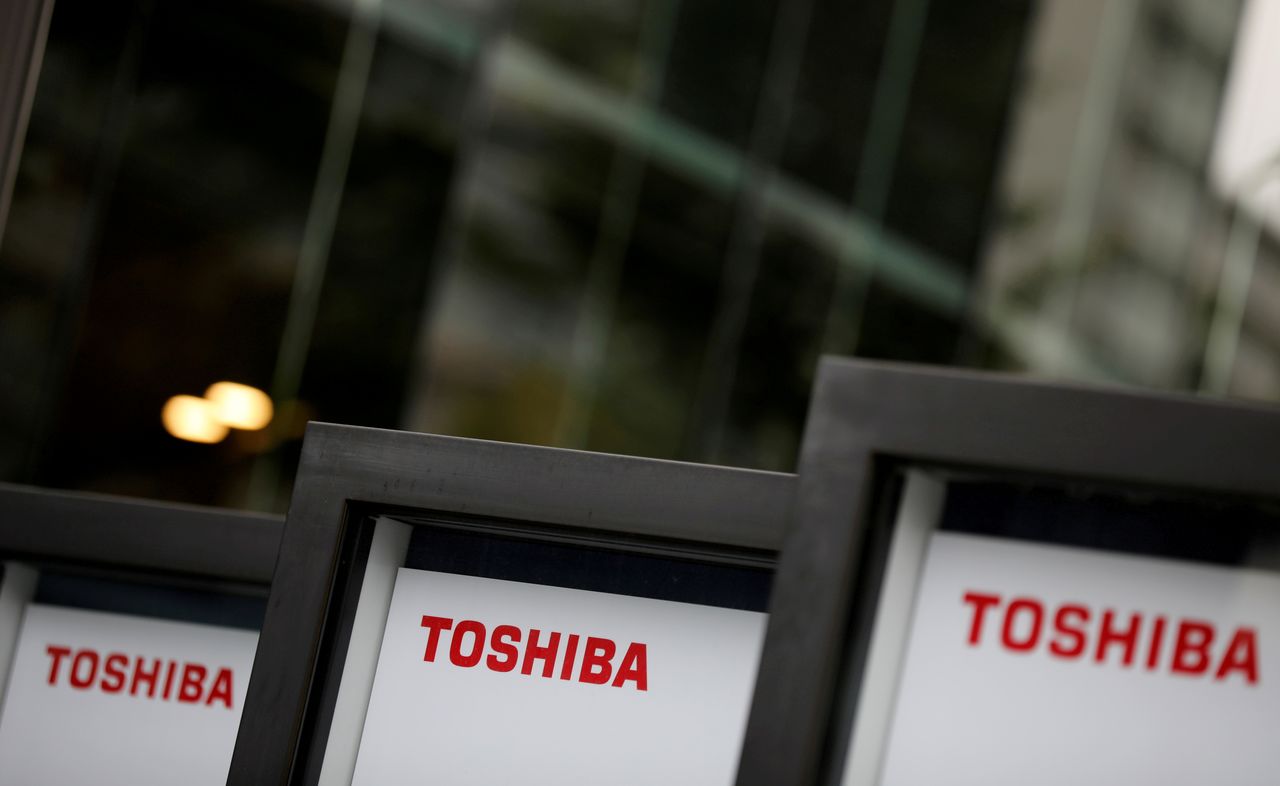 FILE PHOTO: Logos of Toshiba Corp are pictured at a venue of the company's annual general meeting with its shareholders in Tokyo, Japan, June 25, 2021. REUTERS/Kim Kyung-Hoon/File Photo/File Photo

TOKYO (Reuters) - Toshiba Corp is grappling with difficult decisions as it seeks to muster shareholder support for its plan to split into three companies, with some investors concerned it might set a preliminary bar for approval lower than they would like.

The scandal-ridden Japanese conglomerate outlined the breakup plan last month - a scheme that runs counter to calls by some investors for Toshiba to be taken private and one which sources have said was partly designed to encourage activist shareholders to sell their stakes.

3D Investment Partners, which owns more than 7% of Toshiba, last month publicly said it opposes the plan and called on the conglomerate to solicit offers from potential buyers. At least several other large shareholders are also opposed, people with knowledge of the matter have told Reuters.

Toshiba has proposed an extraordinary general meeting (EGM) in the January-March quarter to gauge shareholder support. If it wins support, the company would then proceed with preparations for the breakup which it wants to complete by March 2024. A formal shareholder vote would take place much closer to the timing of the breakup and would by law require two-thirds in favour for it to be approved.

Much about the EGM, however, is unclear - including how Toshiba will word any motions and exactly when it will take place. The EGM would also not be binding under Japanese law, meaning Toshiba is allowed to set the level required for shareholder approval.

A Toshiba spokesperson said details of the EGM have yet to be decided including the level of approval.

Some shareholders said they would be upset if Toshiba decides it only needs a simple majority at the EGM.

"If the company will need two-thirds two years later, they should set the same bar now," said a source at a major hedge fund shareholder, who was not authorised to speak to media and declined to be identified.

Activists account for nearly 30% of Toshiba's shareholders - the result of a desperate capital raising in 2017 - and setting the EGM's bar at two-thirds for approval could be hard to meet.

Setting it lower at a simple majority would be easier and could buy Toshiba time to convince doubtful investors to come round to its point of view. A longer run-up to a shareholder vote requiring two-thirds in favour could also test the patience of some investors who might pull out of Toshiba before then.

One alternative to seeking a direct vote on support for the breakup plan that has been floated among Toshiba's board is asking shareholders at the EGM to instead vote on the reappointment of its board directors, three sources familiar with the matter said.

Reappointments, which require approval of more than 50%, would then be taken as a vote of confidence in the board and by extension the breakup plan, the sources said.

One of the sources said, however, that the chance of the company choosing that option was low.

"It risks creating a power vacuum if board directors are voted down," the source said.

Toshiba has long had a tense relationship with its activist shareholders. In June, an explosive shareholder-commissioned investigation concluded that the company had colluded with Japan's trade ministry to block investors from gaining influence at last year's shareholders meeting.

The breakup plan, borne of a strategic review in the wake of that scandal, calls for Toshiba's energy and infrastructure divisions to be one company while its hard disk drives and power semiconductor businesses will be another. A third will manage Toshiba's stake in flash-memory chip company Kioxia.

Toshiba has walked away from potential private equity buyout offers, as well as advanced talks for a minority stake from Canada's Brookfield, sources have said.