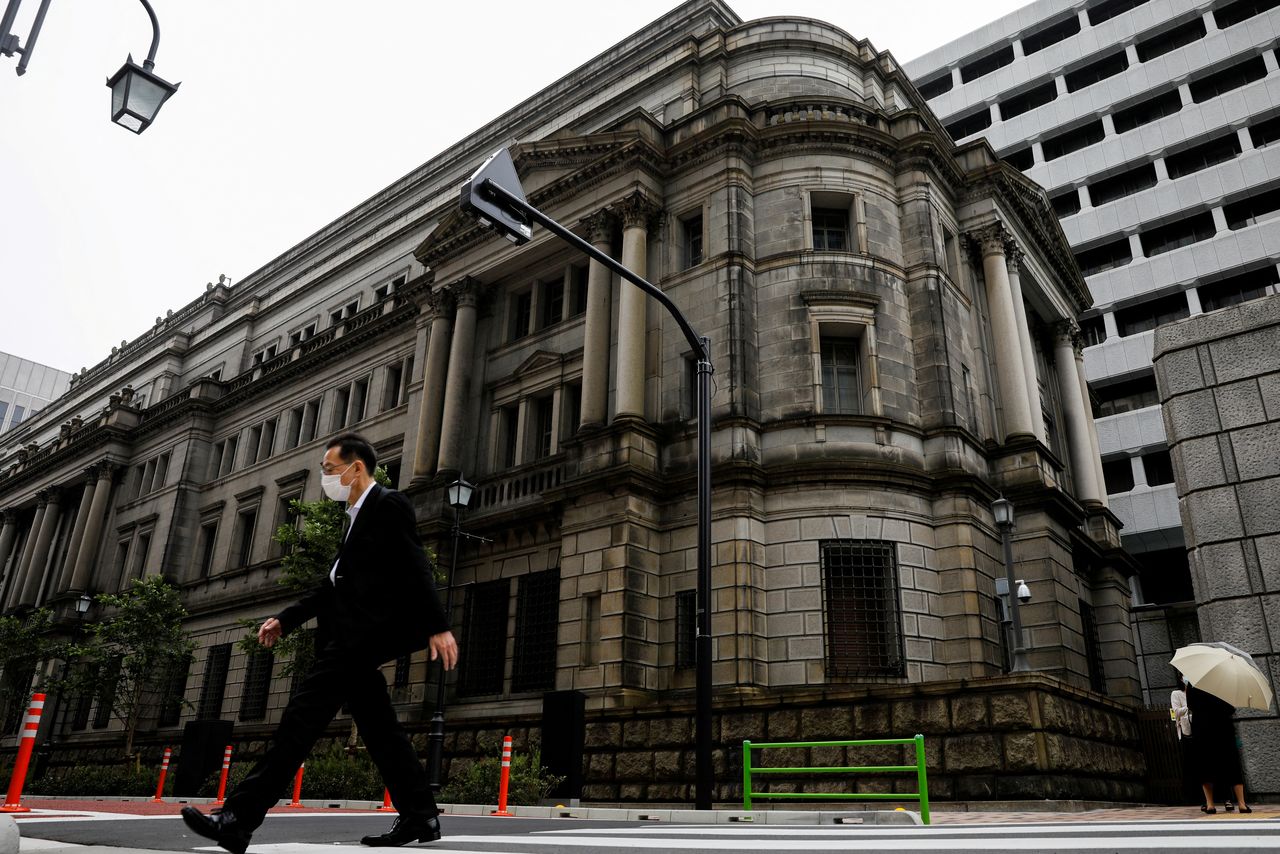 TOKYO (Reuters) -The Bank of Japan is expected to decide as early as next week to scale back emergency funding deployed last year to combat a pandemic-induced cash crunch, sources say, following other central banks in gradually phasing out crisis-mode policies.

At a two-day rate review ending on Dec. 17, the BOJ is set to maintain ultra-loose monetary policy but debate whether to extend its emergency pandemic-relief programmes beyond the current the March 2022 deadline.

While details are yet to be finalised, the board is leaning toward tapering the BOJ's corporate bond and commercial paper purchases given sharp improvements in big firms' funding conditions, four sources familiar with its thinking said.

Another funding scheme targeting smaller firms may be scaled back, too, though a portion of it could be extended beyond March to keep supporting retailers still struggling with weak consumption, they said.

The decision will be a close call and could be delayed until January if the spread of the Omicron coronavirus variant heightens uncertainty over a fragile economic recovery, they said.

"The programmes were intended to be emergency steps, so they must end at some point," one of the sources said.

"The timing of doing so is tricky with Omicron clouding the outlook," another source said. All of the sources declined to be named as they were not authorised to speak publicly.

Major central banks are winding down crisis-era policies and some are eyeing raising interest rates as supply bottlenecks and robust demand, driven in part by a re-opening of their economies, push up inflation.

Analysts polled by Reuters expect the Bank of England to hike rates early next year, followed by a projected increase by the U.S. Federal Reserve in the third quarter of next year.

There is no consensus yet on the BOJ's final decision, which will depend largely on whether the spread of Omicron disrupts markets or forces the government to take tighter curbs on activity.

Policymakers will scrutinise the BOJ's "tankan" business sentiment survey, due on Monday, for clues on whether corporate funding strains have eased enough to warrant scaling back crisis-mode funding support, the sources said.

If Omicron developments increase risks around the outlook, the BOJ may delay the decision to its next meeting on Jan. 17-18, they said.

The BOJ last year ramped up purchases of corporate bonds and commercial paper, and now pledges to buy at a pace that increases the balance of its holdings by up to 20 trillion yen ($176 billion).

The balance has hovered around half the level for most of this year, as the BOJ slowed purchases reflecting waning corporate appetite for precautionary funds.

The BOJ has also pumped roughly 80 trillion yen into the economy through a separate loan scheme aimed at channeling funds to cash-strapped small firms by financial institutions.

Despite easing corporate funding strains, many policymakers are wary of completely ending the loan scheme on concern of pulling the plug on small firms too hastily, they said.

Ending the scheme now could also be interpreted by markets as running counter to the government's effort to reflate growth with a massive spending package, some analysts say.

The BOJ may thus phase out most of the scheme, but extend beyond March some incentives to banks aimed at encouraging them to lend to cash-strapped smaller firms, they said.

Even if it were to scale back funding, the BOJ is likely to stress its resolve to ramp up support again if a resurgence in infections jolt markets and hit firms, the sources said.

The pandemic-relief programmes are separate from the BOJ's main policy framework, which includes yield curve control under which the bank floods markets with cash to guide short-term interest rates at -0.1% and long-term rates around zero.