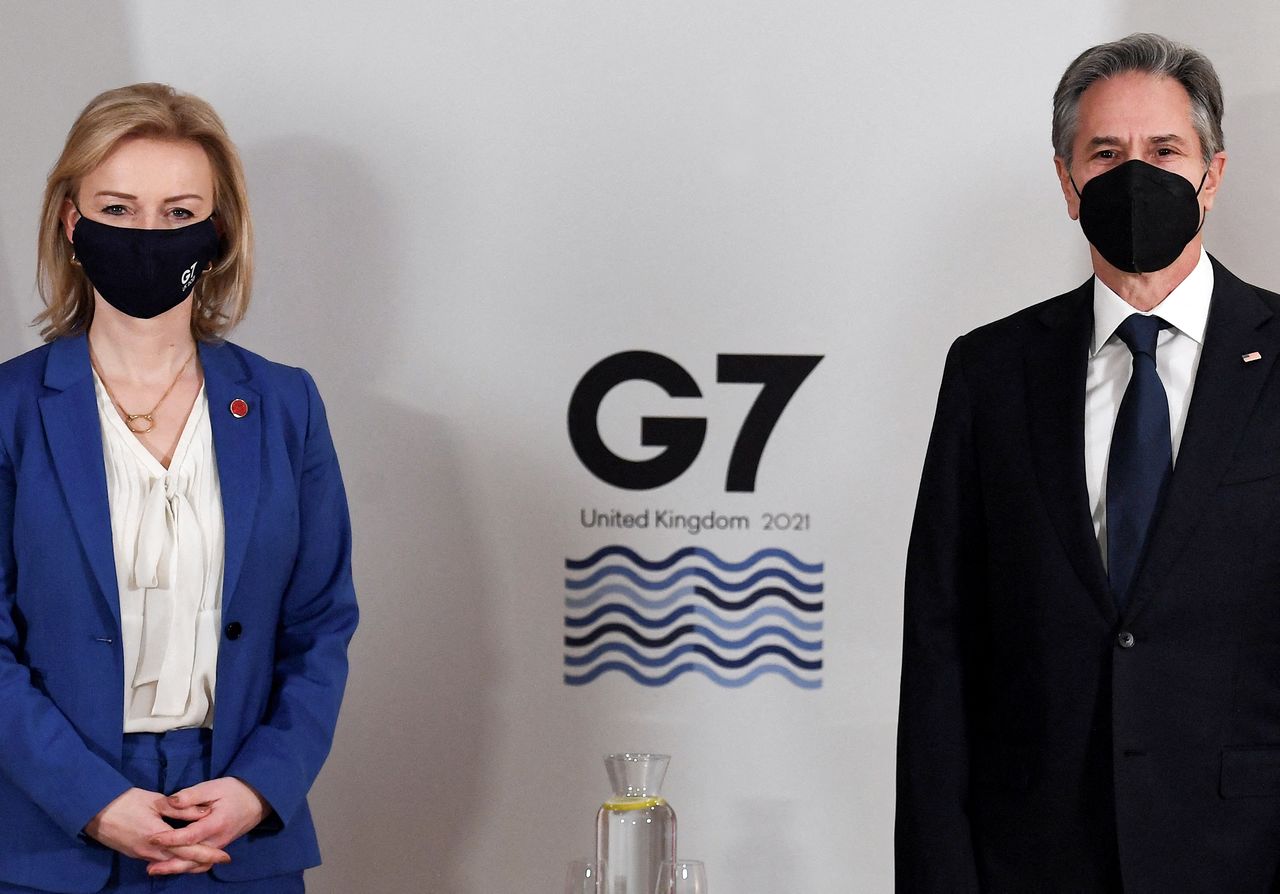 Britain's Foreign Secretary Liz Truss and U.S. Secretary of State Antony Blinken wearing face masks to combat the spread of the coronavirus disease (COVID-19) pose for a photograph before a bilateral meeting ahead of the G7 foreign ministers summit in Liverpool, Britain, December 10, 2021. Olivier Douliery/Pool via REUTERS

By William James and Humeyra Pamuk

LIVERPOOL, England (Reuters) -The Group of Seven richest democracies on Saturday sought to dissuade Russia from invading Ukraine, putting on a united front to warn of dire consequences for any incursion and urging Moscow to return to the negotiating table.

The G7 meeting comes as the West frets over China's military and economic ambitions, the possibility that talks to prevent Iran pursuing a path to nuclear weapons could fail, and as Russia masses troops on the Ukrainian border.

A senior U.S. State Department official described the day's talks as "intense" and said there was still a diplomatic path to de-escalate the tensions with Russia.

"If they (Russia) choose not to pursue that path, there will be massive consequences and severe costs in response, and the G7 is absolutely united in that," she said. "“The kinds of costs that we are talking about are designed to be implemented very very fast."

Addressing the opening session of the talks, British foreign minister Liz Truss had urged the G7 to speak with one voice.

"We need to defend ourselves against the growing threats from hostile actors and we need to come together strongly to stand up to aggressors who are seeking to limit the bounds of freedom and democracy," said at the start of the meeting.

Ukraine is at the centre of a crisis in East-West relations as it accuses Russia of massing tens of thousands of troops in preparation for a possible large-scale military offensive.

Russia denies planning any attack and accuses Ukraine and the United States of destabilising behaviour, and has said it needs security guarantees for its own protection.

"We need to take every action to return to dialogue," German foreign minister Annalena Baerbock told reporters. Germany takes over the rotating G7 leadership from Britain next year.

Washington is sending its top diplomat for Europe, Assistant Secretary Karen Donfried, to Ukraine and Russia on December 13-15 to meet with senior government officials.

"Assistant Secretary Donfried will emphasize that we can make diplomatic progress on ending the conflict in the Donbass through implementation of the Minsk agreements in support of the Normandy Format," the U.S. State Department said in a statement.

Ministers arrived at the Museum of Liverpool to a brass band playing Christmas carols, before starting behind-closed-doors meetings covering development finance, geopolitics and security. Later they left to take in the city's musical heritage over dinner at an exhibition telling the story of The Beatles.

Britain is calling for G7 members to be more strident in their defence of what it calls "the free world", and discussions focused on Russia, China and Iran throughout the day. A statement on the outcomes from the talks is due Sunday.

The United States, Britain, France and Germany met late into Friday night to discuss the way forward on Iran, following the resumption of talks in Vienna on reviving a 2015 nuclear deal.