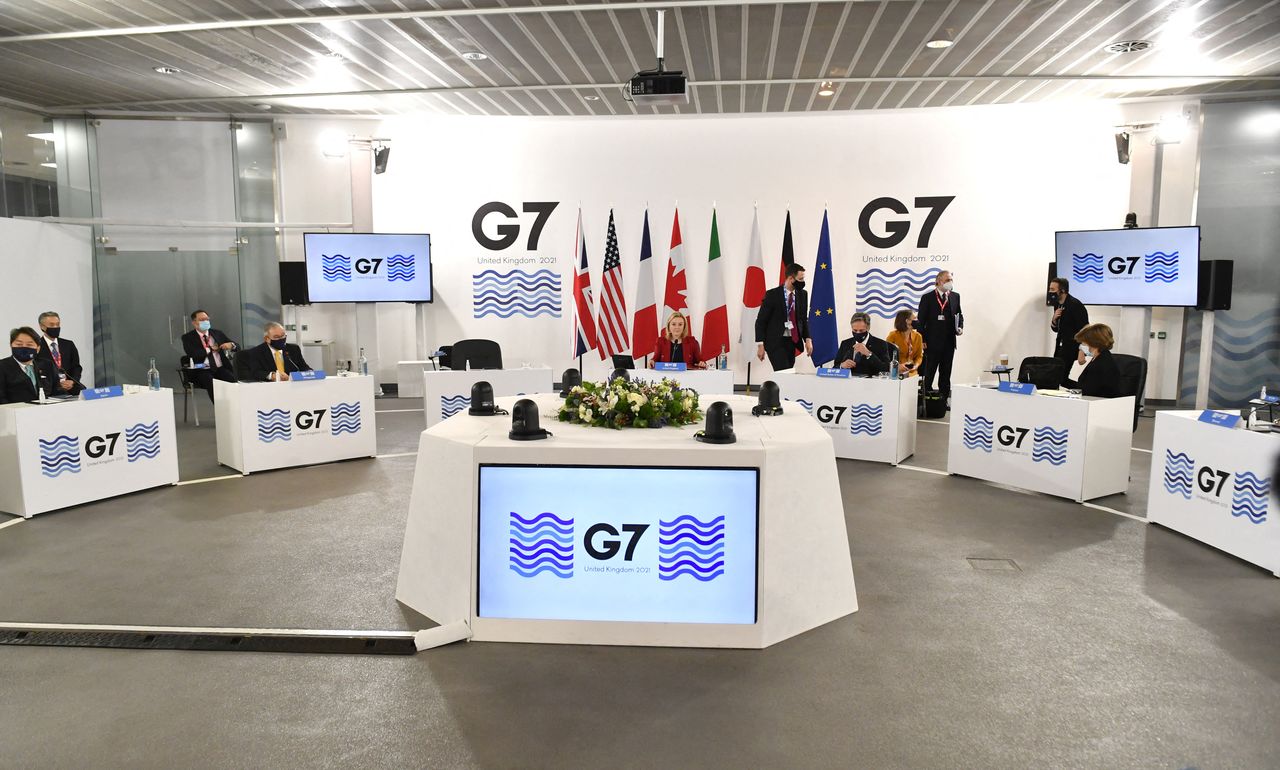 LIVERPOOL, England (Reuters) -While Russian President Vladimir Putin keeps the West guessing over Ukraine, it was the might of Chinese President Xi Jinping that garnered the long-term strategic focus when the diplomats from the Group of Seven richest democracies met this weekend.

The United States and its other G7 allies are searching for a coherent response to Xi's growing assertiveness after China’s spectacular economic and military rise over the past 40 years.

Putin was the immediate tactical focus at talks in the English city of Liverpool between U.S. Secretary of State Antony Blinken and his counterparts. There was support for President Joe Biden's attempt to support Ukraine and deter Putin with a clear warning of severe economic sanctions.

"There’s a huge amount of convergence about what will unfortunately be necessary if Russia makes that very bad choice," a senior U.S. State Department official said.

The West is concerned that Russia might be preparing to attack Ukraine. The Kremlin denies it plans to invade Ukraine but has demanded legally binding security guarantees that NATO will not expand further east.

Concerns were raised about alleged Russian disinformation campaigns but there was no clear agreement on, for example, whether or not to slap penalties on the Nord Stream 2 pipeline, according to sources with knowledge of the discussions.

Russia was included in what became the G8 in 1997 but was suspended in 2014 after annexing Crimea from Ukraine. Moscow says the G7 - the United States, Britain, Canada, France, Germany, Italy and Japan - is making aggressive accusations.

If Putin, 69, was the short-term concern, Xi's China was the strategic puzzle on everyone's lips.

There were "very, very intense discussions especially on China," said one official who attended the talks.

China in 1979 had an economy that was smaller than Italy’s, but after opening to foreign investment and introducing market reforms, it has become the world’s second-largest economy and is a global leader in a range of new technologies.

Founded in 1975 as a forum for the West's richest nations to discuss crises such as the OPEC oil embargo, the G7 scolded both China and Russia after a summit meeting in Cornwall in June.

China, which has never been a G7 member, retorted in June following that meeting that "small" groups no longer ruled the world.

"It’s tremendous that there’s such a focus on the Indo-Pacific here," said a second State Department official.

The first State Department official said that foreign ministers discussed the situation in Hong Kong, the Xinjiang region and the importance of peace in the Taiwan straits.

The need to support Lithuania was also discussed. China downgraded its diplomatic ties with the Baltic state and suspended consular services after the Taiwanese Representative Office in Lithuania opened on Nov. 18.

"We have been clear at this meeting this weekend that we are concerned about the coercive economic policies of China," British Foreign Secretary Liz Truss told reporters.

The G7 wants to act together over Beijing but without seeming to be an anti-China club.

Western officials point out that the G7 combined still packs a powerful punch: it has about $40 trillion in economic clout and includes three of the world's five official nuclear powers.

There was serious discussion about G7 coordinated action to counter China over disinformation and to support countries snared in what critics cast as China's global debt-trap web, officials said.

Canada joined Australia, Britain and the United States in a diplomatic boycott of the Winter Olympics in Beijing on Wednesday. China has said https://www.reuters.com/lifestyle/sports/china-says-australia-britain-us-pay-price-wrong-acts-2021-12-09 those countries will pay a price for their snub.

At the G7, Japan and Germany were still undecided and Italy was skeptical about the boycott.

Blinken heads https://www.reuters.com/world/blinken-heads-southeast-asia-deepen-cooperation-china-pushback-2021-12-12 to Southeast Asia on Monday in an attempt to forge a united front against China in the Indo-Pacific.