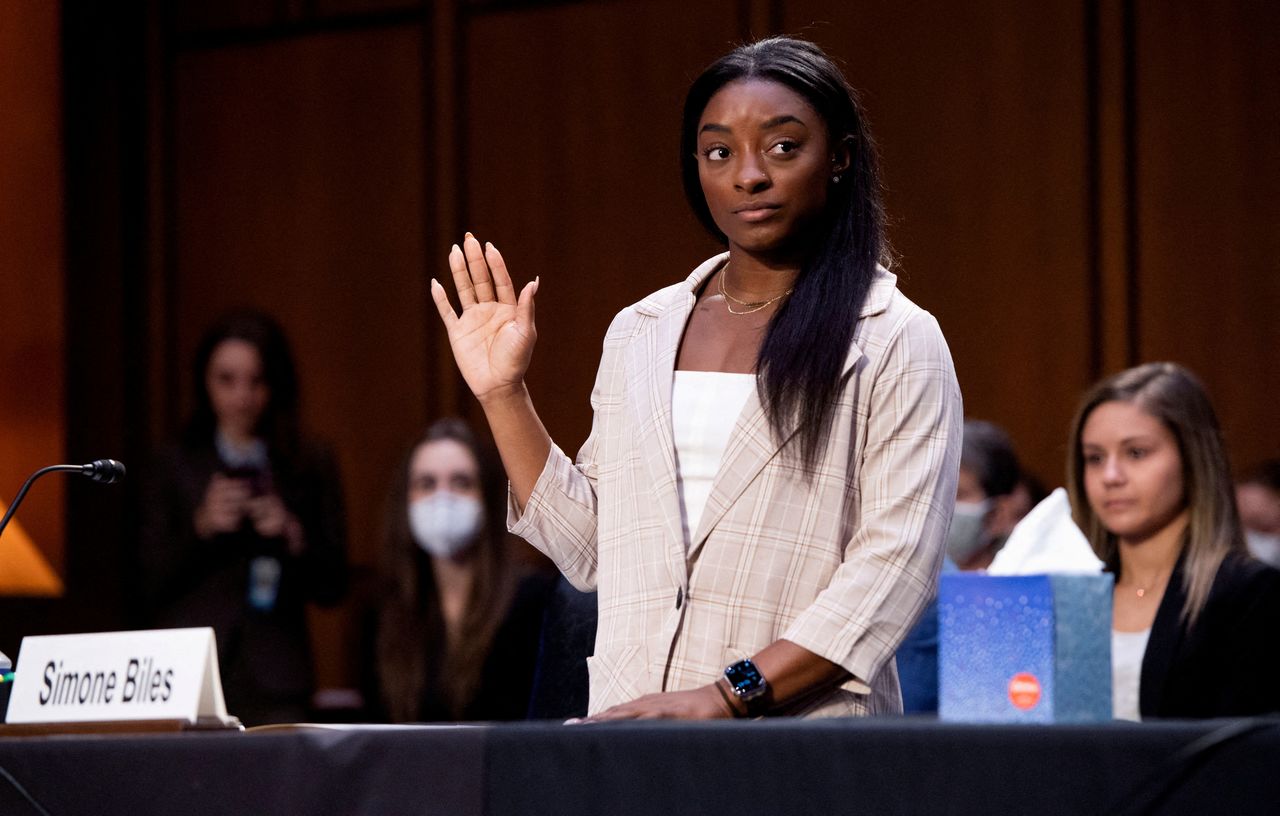 FILE PHOTO: U.S. Olympic gymnast Simone Biles is sworn in to testify during a Senate Judiciary hearing about the Inspector General's report on the FBI handling of the Larry Nassar investigation of sexual abuse of Olympic gymnasts, on Capitol Hill, in Washington, D.C., U.S., September 15, 2021. Saul Loeb/Pool via REUTERS

NEW YORK (Reuters) - Painful revelations of abuse and misconduct rocked the world of sport in 2021 as athletes from all levels of competition across the globe demanded greater accountability of trainers, coaches and the governing bodies that oversee them.

A report released in October sent shockwaves through the National Hockey League (NHL) after an investigation found that the Chicago Blackhawks failed to act on allegations made by player Kyle Beach that video coach Brad Aldrich sexually assaulted him during the 2010 Stanley Cup playoffs.

Aldrich stated that the encounter was consensual.

The report led to the resignation of Florida Panthers head coach Joel Quenneville, who was coach of the Blackhawks when the allegations were made, and promises of reform from the upper echelons of the NHL.

"This has to serve as a wake-up call nL1N2RS2BH to all clubs that you need to make sure you understand what your organisation is doing because you are going to be held responsible," NHL Commissioner Gary Bettman told reporters, promising change within the league while defending his own handling of the case.

The National Women's Soccer League (NWSL) was forced into a reckoning of its own as The Athletic in September outlined allegations of sexual abuse by former North Carolina Courage head coach Paul Riley, after speaking to more than a dozen players he had coached since 2010.

The report and subsequent fallout engulfed the league, prompting the departure of former Commissioner Lisa Baird and demands for reform, as soccer's world governing body FIFA launched its own investigation.

"(Everybody involved) didn't have much of a choice than to kind of put their hands up and go 'Okay, this needs to change,'" league MVP Jess Fishlock told Reuters.

"Do I think now that the league is sitting down going, 'Ok, let’s have this conversation' – rather than before where they were like 'We don't care what you think'? I think that has definitely changed."

Across the globe, athletes demanded action.

Football Australia set up an independent complaints body in October after retired striker Lisa De Vanna said she had been the victim of sexual assault and harassment during her career.

"I blame Larry Nassar and I also blame an entire system that enabled and perpetrated his abuse," said Biles.

On Monday, the victims of Nassar's abuse reached a $380 million settlement nL1N2SY1G8 with USA Gymnastics, the U.S. Olympic & Paralympic Committee and their insurers after a five-year legal battle.

"This settlement is about the brave survivors who came forward, forced these organisations to listen, and demanded change," Michelle Simpson Tuegel, who represents more than two dozen Nassar survivors, said in a joint statement with Tasha Schwikert Moser, co-chair of the Survivors Creditors Committee.

The U.S. Center for SafeSport is an independent non-profit organisation that provides sports with guidelines on how to provide safe environments for athletes and training for coaches and administrators.

"SafeSport accountability, training and policies are making athlete well-being sport’s top priority but to see it fully realized those resisting change need to get on board, or get out - it’s happening with or without them."