By William Maclean and Steve Holland

LONDON/WASHINGTON (Reuters) - Countries across Europe considered new curbs on movement on Tuesday while U.S. President Joe Biden appealed to all Americans to get vaccinated to fight the Omicron variant sweeping the world days before the second Christmas of the pandemic.

Omicron infections are multiplying across Europe, the United States and Asia, including in Japan, where a single cluster cases at a military base has grown to at least 180.

"If you're not fully vaccinated, you have good reason to be concerned," Biden said at the White House, where he unveiled plans to buy 500 million rapid COVID-19 tests to be distributed for free to Americans who request them starting in January.

Striking a dire tone about the risks to the one in four American adults still unvaccinated, he said: "Your choice can be the difference between life and death."

Omicron now accounts for 73% of all new cases in the United States, up from less than 1% at the beginning of the month.

Hans Kluge, the World Health Organization's European head, told a news conference in Vienna that within weeks Omicron would dominate in more countries of the region, "pushing already stretched health systems further to the brink."

"We can see another storm coming," Kluge said.

Germany, Scotland, Ireland, the Netherlands and South Korea are among countries to have reimposed partial or full lockdowns or other social distancing measures in recent days.

Portugal ordered nightclubs and bars to close and told people to work from home for at least two weeks from Saturday.

Nicola Sturgeon, first minister of Scotland - part of the United Kingdom but with devolved responsibilities for health - set out plans for further restrictions on big public events, including sports fixtures, for three weeks after Christmas.

"It will also mean unfortunately that large scale Hogmanay celebrations, including that planned here in our capital city (Edinburgh), will not proceed," she said, referring to traditional Scottish New Year parties.

New Zealand COVID-19 Response Minister Chris Hipkins said his country, which imposed some of the world's toughest COVID-19 measures, was delaying the start of a staggered reopening of its border until the end of February.

"All of the evidence so far points to Omicron being the most transmissible COVID-19 variant yet," he said.

Chancellor Olaf Scholz said Germany will introduce new steps including limiting private gatherings for vaccinated people to a maximum of 10 before New Year's Eve. Scholz agreed with the premiers of the 16 federal states that big events, including football matches, would be without spectators.

British Prime Minister Boris Johnson said he would not introduce new COVID-19 curbs in England before Christmas, but the situation remained extremely difficult and the government might need to act afterwards.

Finance minister Rishi Sunak announced 1 billion pounds ($1.3 billion) of extra support for businesses hit hardest by Omicron, which is hammering the hospitality sector and other businesses.

'I UNDERSTAND THAT MANY ARE TIRED'

Twenty-four-year-old medical student Rebecca Gilmore, who lost her younger brother to suicide earlier in the year, said being apart from her family was especially hard this year but self-isolating with her partner was the right thing to do.

"It means I'm protecting the most vulnerable people," she said.

Sweden will urge all employees to work from home if possible and impose tighter rules for social distancing.

"I understand that many are tired of this - so am I - but we now have a new virus variant, which means we are in a new situation," said Prime Minister Magdalena Andersson.

Omicron has hit financial markets hard in recent days over fears for the global economic recovery, but world shares gained on Tuesday, with the dollar softening as appetite for riskier assets made a cautious return.

As of Tuesday, the variant has been confirmed in 106 countries, according to the WHO, after it was first detected last month in southern Africa and Hong Kong.

The severity of illness it causes remains unclear, but the WHO warned it is spreading faster than the Delta variant and is causing infections in people already vaccinated or who have recovered from the COVID-19 disease.

Israel recorded its first known death from the Omicron variant, according to Israeli news media which reported that an elderly man died in Beersheba on Monday.

Eikon users can click https://apac1.apps.cp.thomsonreuters.com/cms/?navid=1063154666 for a case tracker.

(Reporting by Steve Holland in Washington and Reuters bureaux; Writing by Nick Macfie and William Maclean in London, Jane Wardell and Sonya Hepinstall; Editing by Angus MacSwan and Howard Goller) 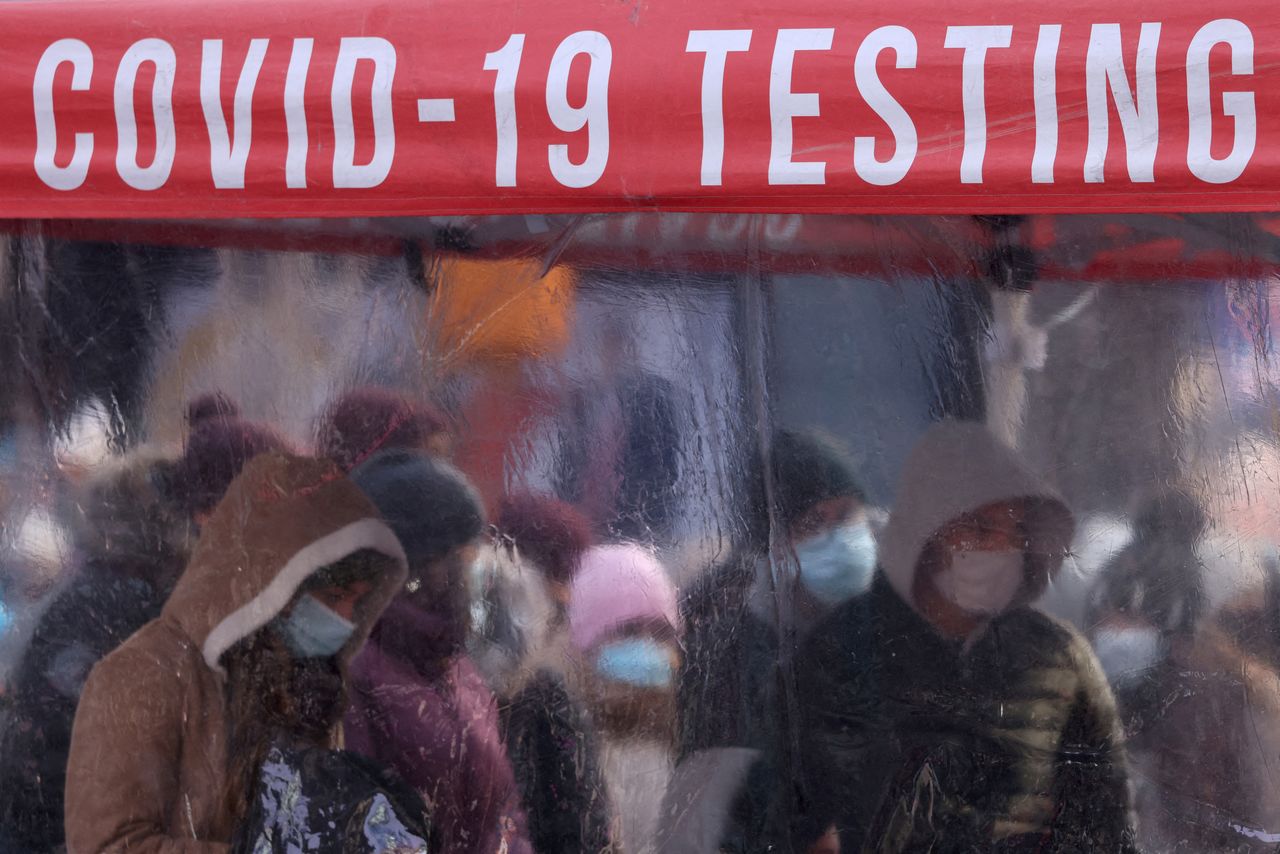 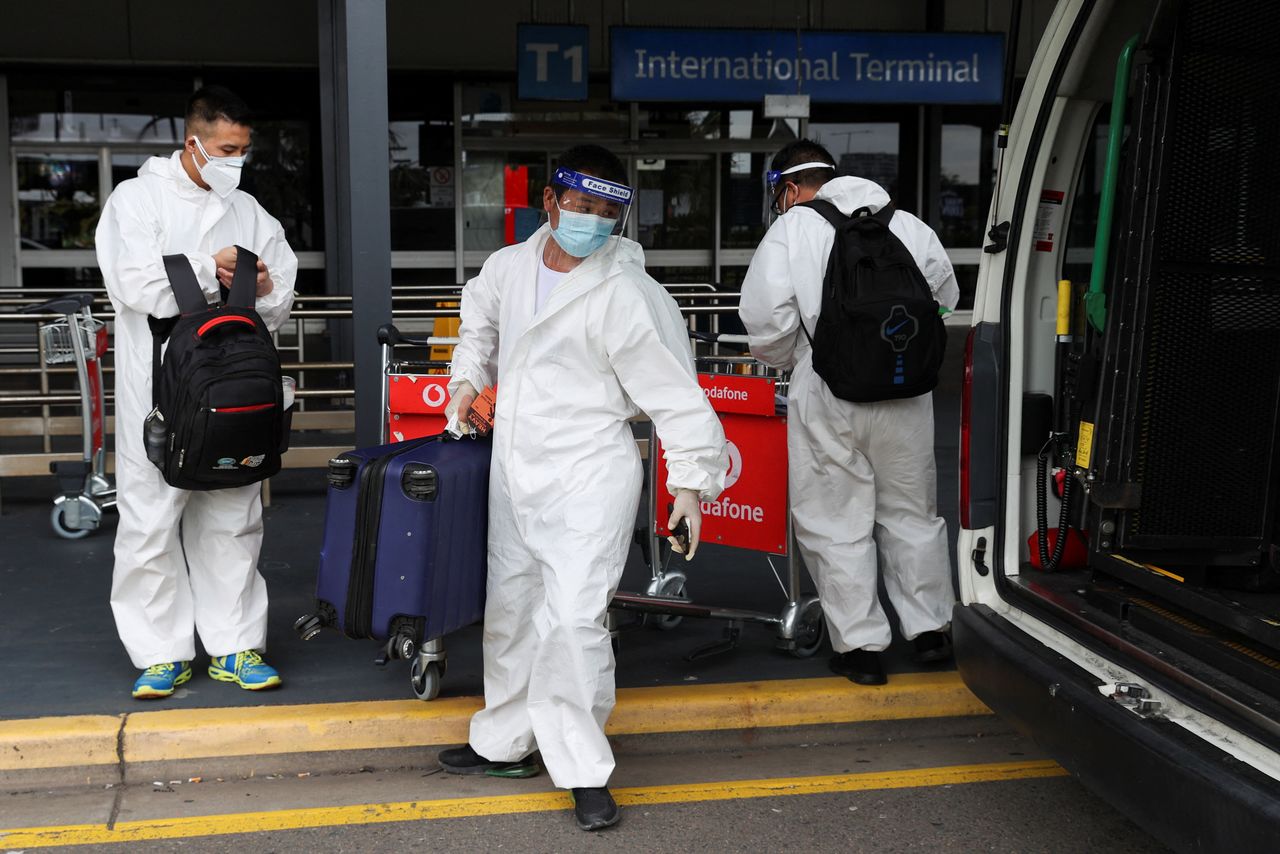 FILE PHOTO: Travellers in personal protective equipment load luggage into a taxi outside the international terminal at Sydney Airport, as countries react to the new coronavirus Omicron variant amid the coronavirus disease (COVID-19) pandemic, in Sydney, Australia, November 29, 2021. REUTERS/Loren Elliott