(Reuters) - The Omicron coronavirus variant dampened New Year festivities around much of the world, with Paris cancelling its fireworks show, London relegating its to television, and New York City scaling down its famous ball drop celebration in Times Square.

The illuminated ball made of Waterford crystal panels slid down its pole at the midnight hour in Times Square, but only 15,000 spectators were allowed into the official viewing area instead of the usual 58,000.

A year ago, the newly available vaccine offered hope that the COVID-19 pandemic may be under control by the start of 2022. Instead, the sudden arrival of Omicron has brought a surge in coronavirus cases across the globe.

Worldwide infections hit a record high over the past seven-day period, with an average of just over a million cases detected a day between Dec. 24 and 30, up some 100,000 on the previous peak posted on Wednesday, according to Reuters data. Deaths, however, have not risen in kind, bringing hope the new variant is less lethal.

New York City reported a record 44,000 cases on Wednesday and another 43,000 on Thursday, leading some critics to question whether the celebrations should go ahead at all.

But officials decided an outdoor party of vaccinated, masked and socially distant revellers was safe, and a better option than the virtually vacant celebration that rung in 2021.

"I would be lying if I said I'm not concerned," said Sue Park, a Columbia University student who was one of the 15,000 allowed to watch in person. "Definitely I think it's worth it to come and celebrate. It will just be more meaningful to be in the crowd."

Elsewhere around the globe, events were scaled back or cancelled outright, such as with the traditional fireworks over the Petronas Towers in Kuala Lumpur.

Midnight passed in Paris without a planned fireworks display or DJ sets, as city officials cancelled events planned on the Champs-Elysees following the advice of a scientific panel that declared mass gatherings would be too risky.

In the Netherlands, where outside groupings of more than four people are banned, police dispersed several thousand people who had defiantly gathered at Amsterdam's central Dam Square, ANP news agency reported.

But in London, where a fireworks display and light show had been cancelled in October, officials announced on Friday the spectacle would come to life on the television screen, as Big Ben rang in the New Year for the first time since 2017 following a restoration.

Earlier, Britain published https://www.reuters.com/business/healthcare-pharmaceuticals/hospitalisation-risk-omicron-around-one-third-delta-uk-analysis-shows-2021-12-31 a study of a million cases that found those with Omicron were around a third as likely to need hospitalisation as those with the previously dominant Delta variant. The results were "in keeping with the encouraging signs we have already seen," said Susan Hopkins, chief medical adviser at the UK Health Security Agency.

In the wake of encouraging data, Cape Town abruptly lifted https://www.reuters.com/world/africa/year-end-cheer-south-africans-midnight-curfew-lifted-2021-12-31 a curfew just in time for the New Year, after South Africa became the first country to declare its Omicron wave had crested - and with no huge surge in deaths.

South Africa had first raised the alarm about the new fast-spreading coronavirus variant racing around the world.

"I'm just hoping that Cape Town goes back to the old Cape Town that we all knew about," said Michael Mchede, manager of a Hard Rock cafe by the white sands of Camps Bay Beach, who was thrilled to get the place ready to host an unexpected bash.

Hours earlier, the Australian city of Sydney also feted the New Year with something like full swagger, as spectacular fireworks glittered in the harbour above the Opera House.

People in Madrid queued for hours to get into the main Puerta del Sol square where celebrations went ahead with multiple security checkpoints, mandatory masks and capacity at 60% of normal levels.

Saul Pedrero, a 34-year old clerk, made the trip from Barcelona, which has some of Spain's strictest controls, including a 1 a.m. curfew.

"It seems like another country. Here you can do everything and nobody says anything," he said.

A lavish firework display lit up the festivities, which Spaniards mark by stuffing 12 grapes into their mouths to accompany each chime of the clock striking midnight.

In Asia, celebrations were mostly abridged or cancelled. In South Korea, a traditional midnight bell-ringing ceremony was cancelled for the second year, while festivities were banned in Tokyo's glittering Shibuya entertainment district, and Prime Minister Fumio Kishida took to YouTube to urge people to wear masks and limit numbers at parties.

China, where the coronavirus first emerged in late 2019, was on high alert, with the city of Xian under lockdown and New Year events in other cities cancelled.

(This story refiles to fix spelling of "pole" in second paragraph) 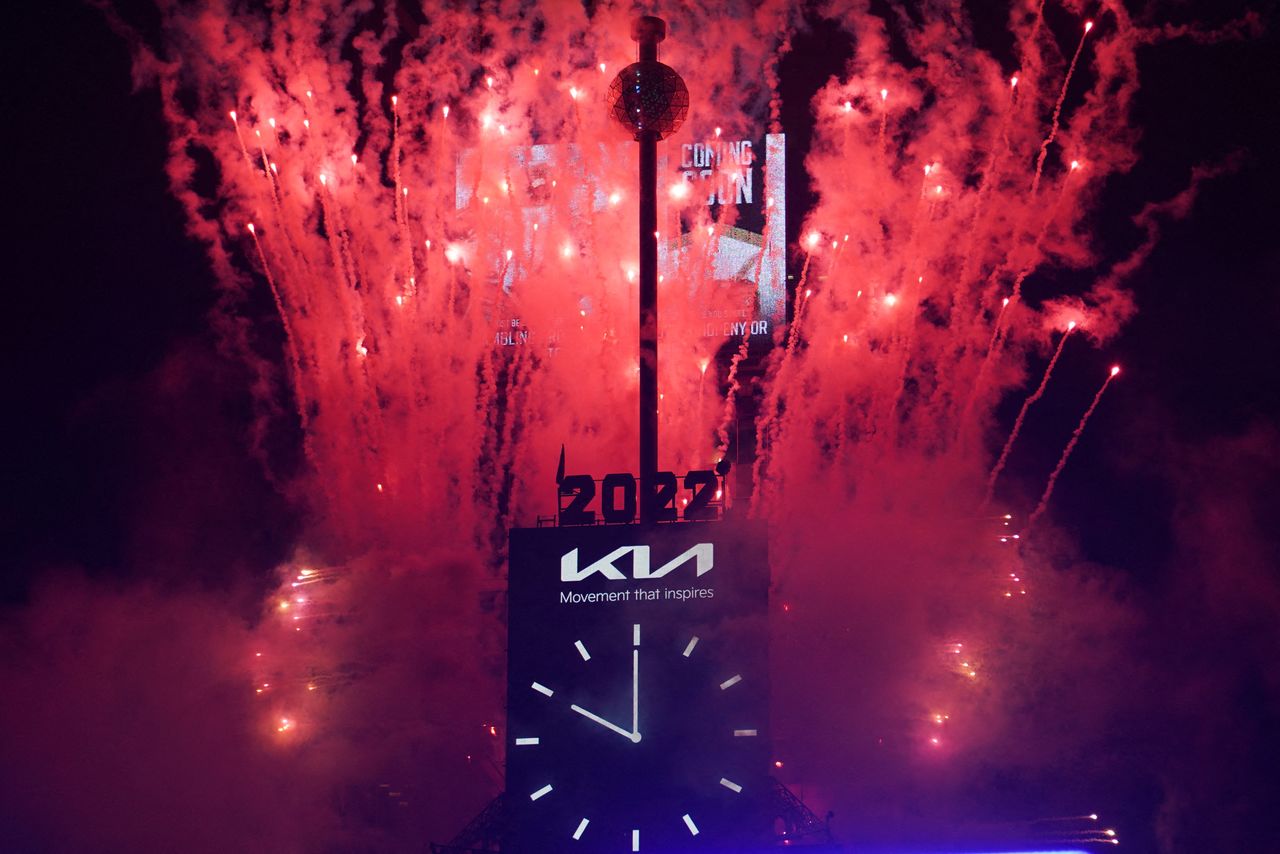 Fireworks are seen during the New Year's Eve celebrations in Times Square, as the Omicron coronavirus variant continues to spread, in the Manhattan borough of New York City, U.S., December 31, 2021. REUTERS/Dieu-Nalio Chery 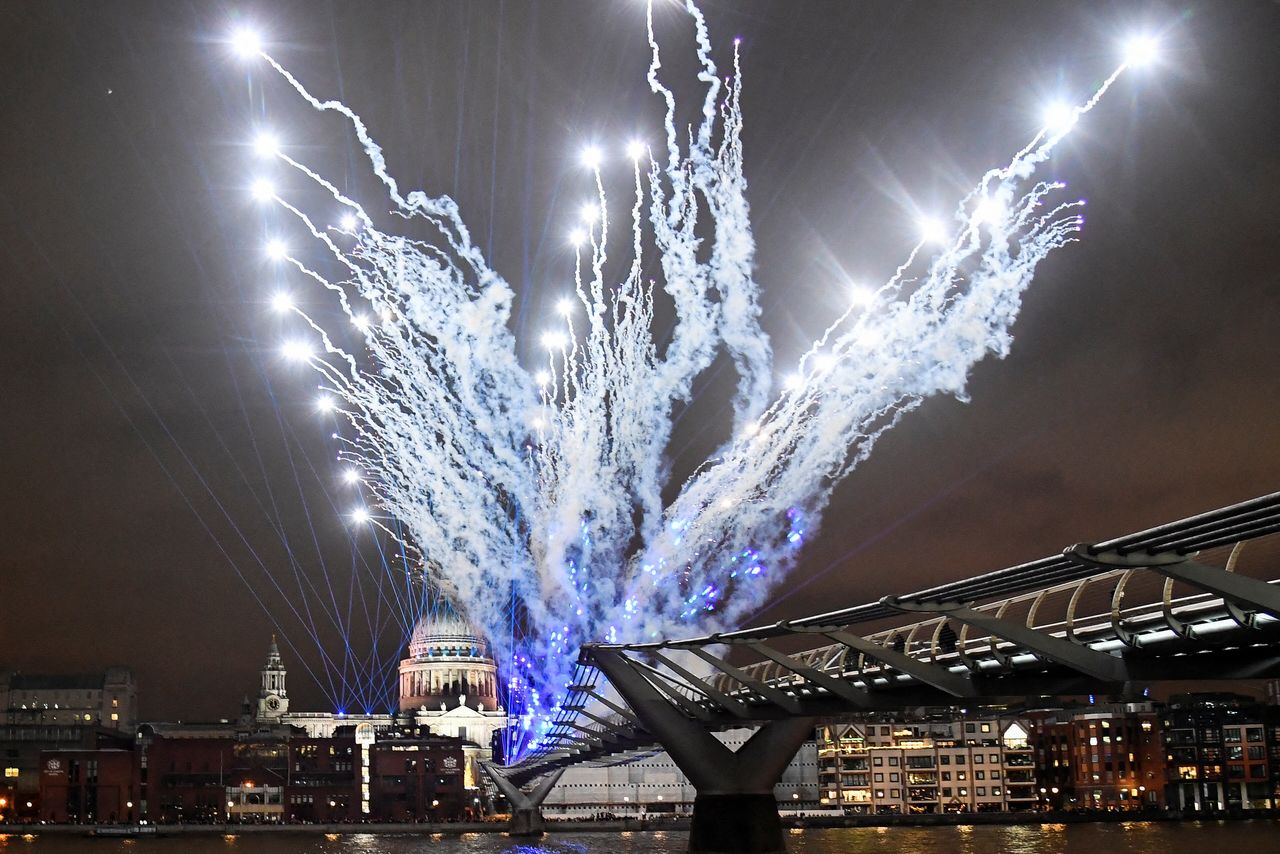 A light display to mark the New Year is seen over St Paul’s Cathedral, amidst the spread of the coronavirus disease (COVID-19) pandemic, in London, Britain, January 1, 2022. REUTERS/Toby Melville 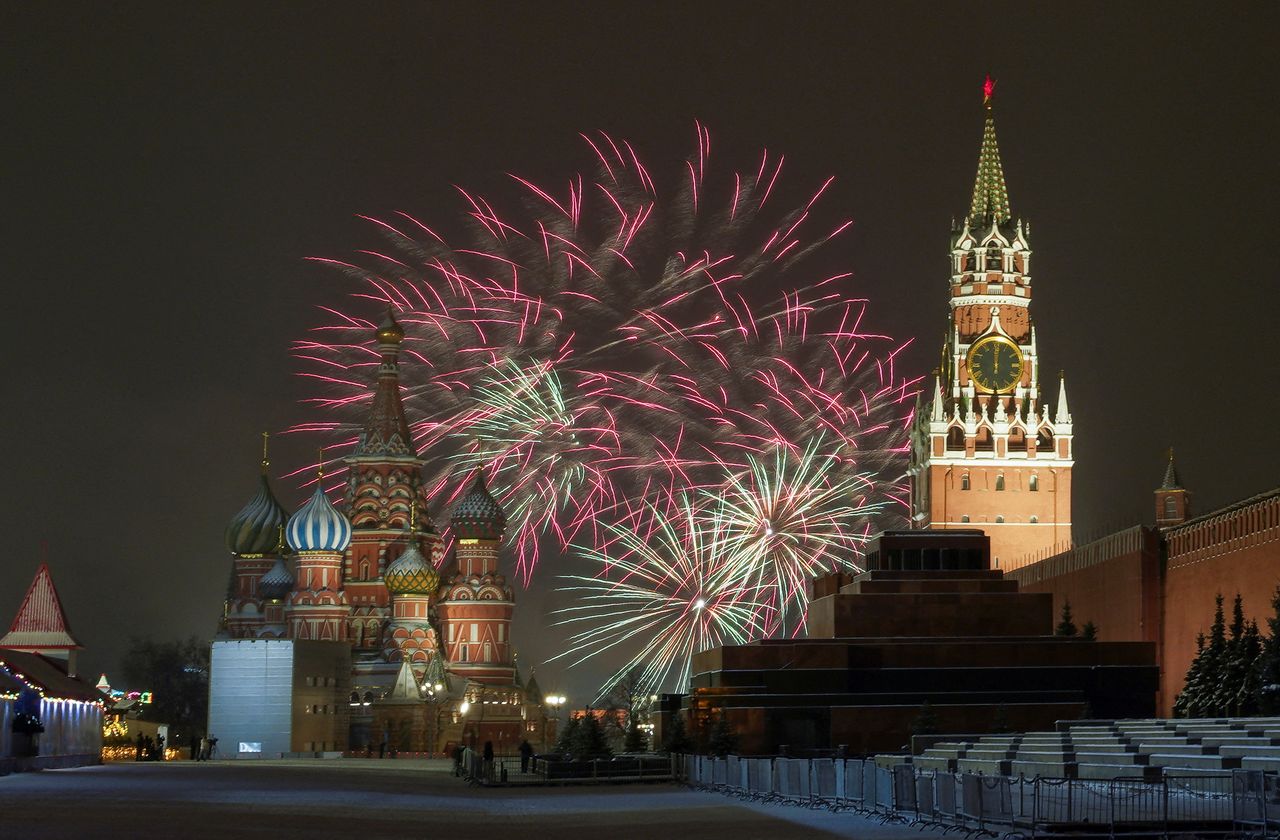 Fireworks explode in the sky over the Kremlin and St. Basil’s cathedral during the New Year's celebrations in Moscow, Russia January 1, 2022. REUTERS/Tatyana Makeyeva 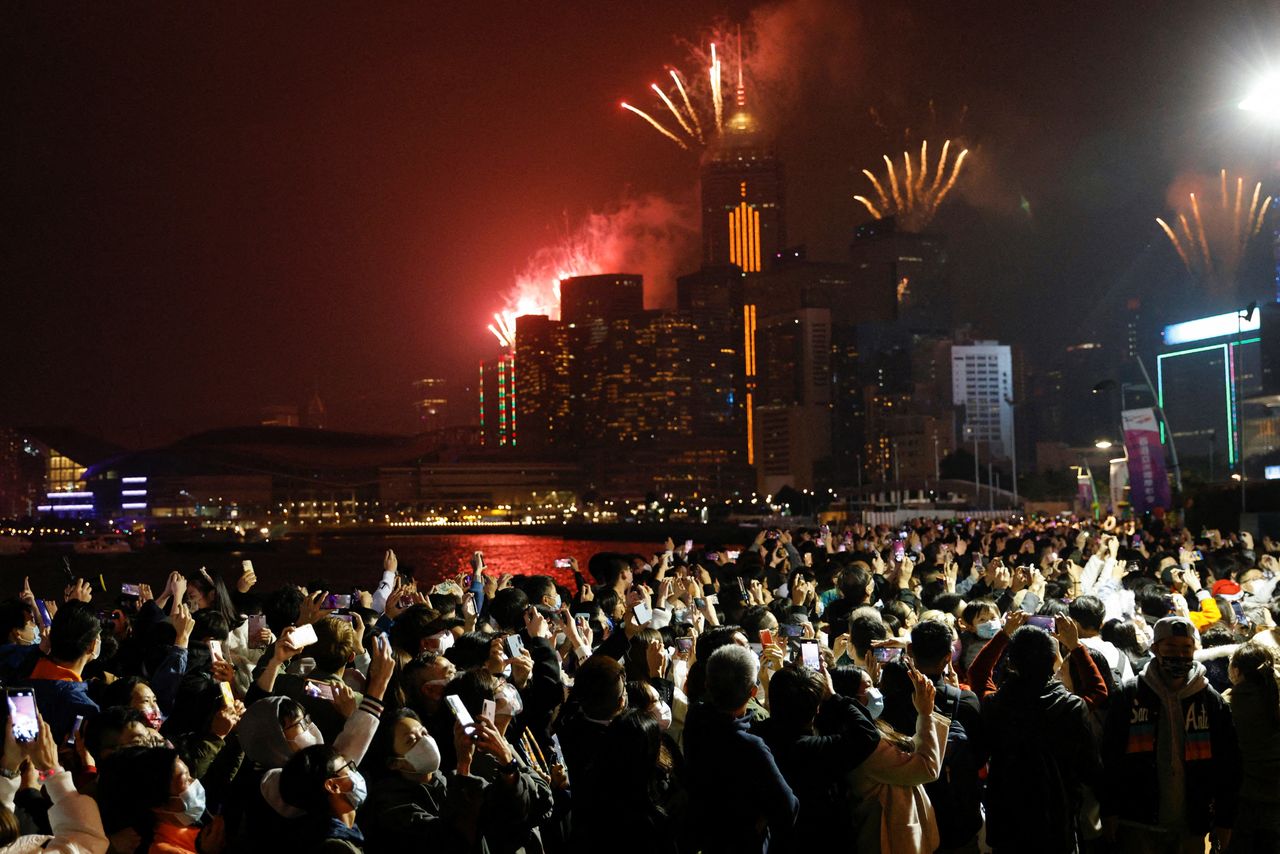 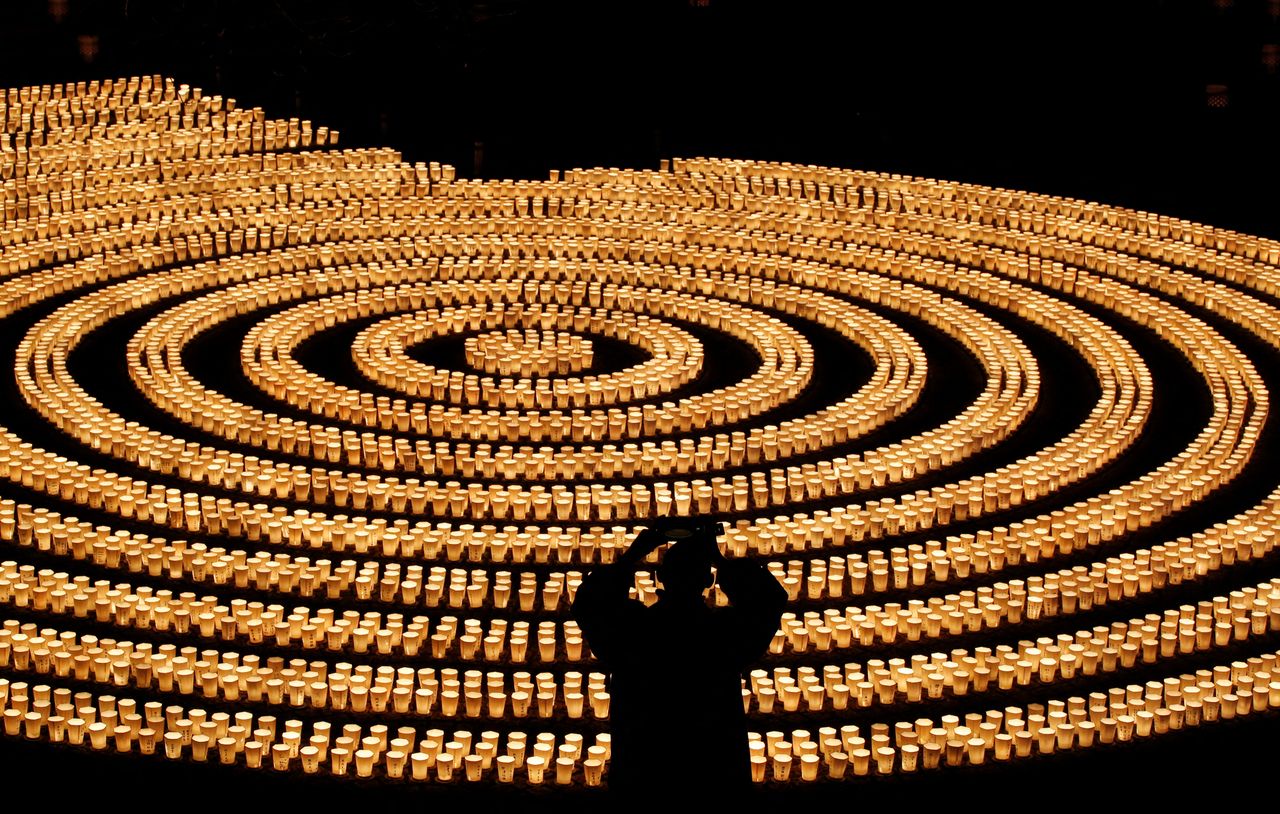 A staff wearing a protective mask, amid the coronavirus disease (COVID-19) outbreak, takes picture of 6,500 candle lights as he prepares for a ceremony to wish for overcoming the pandemic and good luck in the upcoming New Year at Hasedera Buddhist temple in Kamakura, south of Tokyo, Japan, December 31, 2021. REUTERS/Kim Kyung-Hoon