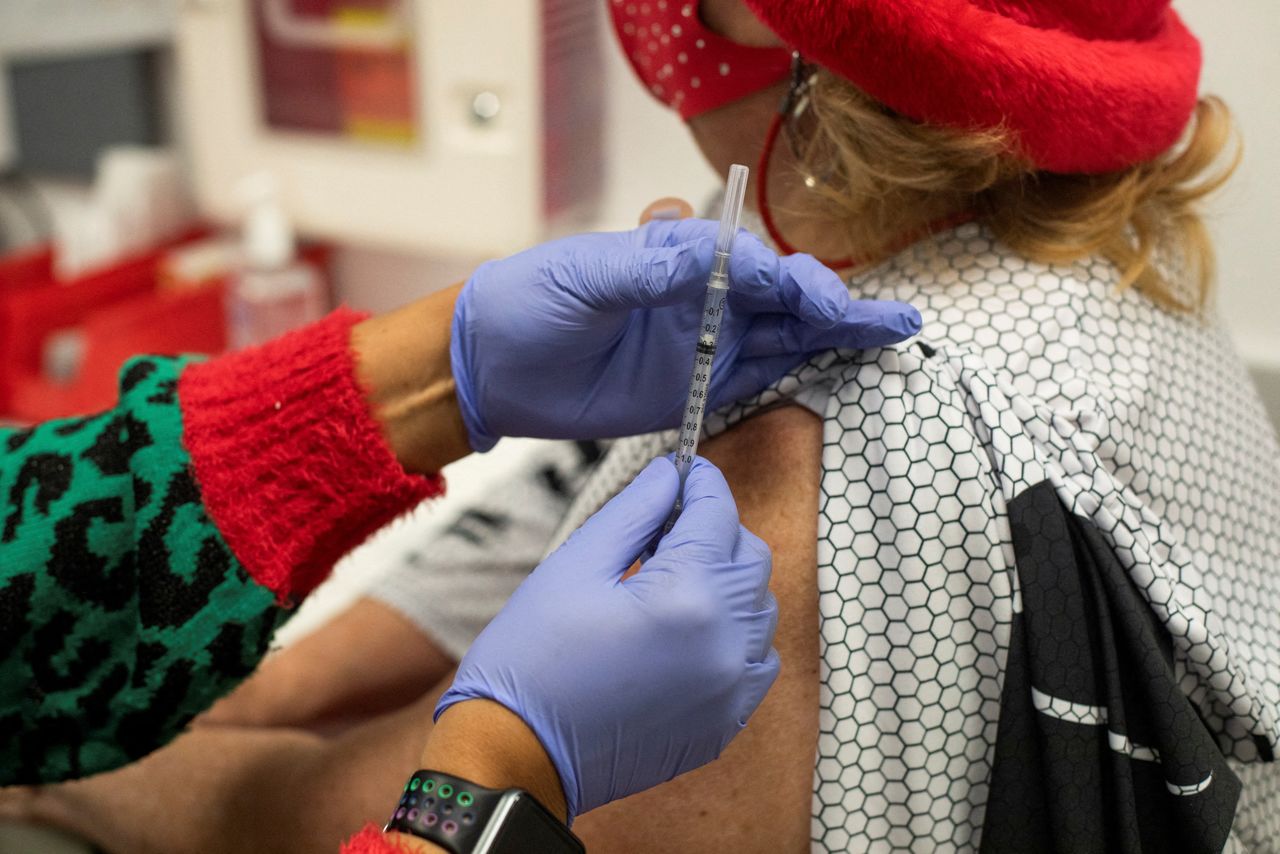 (Reuters) - Many countries are expanding COVID-19 vaccine booster programmes or shortening the gap between shots as governments scramble to shore up protection against the new Omicron variant which emerged a month ago in southern Africa and Hong Kong.

Studies have shown that an initial course of COVID-19 vaccines - typically given in two doses - may not be enough to halt infection from Omicron, but a booster shot may help.

The World Health Organization has said in recent months that administering primary doses - rather than boosters - should be the priority, though it has recommended boosters for those with health issues or who received an inactivated vaccine.

Here are some of the options countries and regions are considering:

The U.S. CDC took a stance more cautious than it had previously and said on Nov. 30 that everyone over 18 should get a booster shot as Omicron's emergence emphasized the importance of vaccination.

Canada's National Advisory Committee on Immunization is recommending booster shots of an authorized mRNA vaccine to those who are moderately or severely immunocompromised.

The European Centre for Disease Prevention and Control (ECDC) on Nov. 24 recommended vaccine boosters for all adults, with priority for those over 40. Previously it had suggested the extra doses should be considered for frail older people and those with weakened immune systems.

The European Commission is recommending vaccinated people receive booster doses no more than six months after their initial shots, with a further three-month grace period for their COVID travel passes to be valid.

The EU's drugs regulator said on Dec. 9 that data supports getting vaccine boosters after three months.

These European countries are offering boosters to adults after they receive a full dose of a vaccine:

** Austria soon to recommend for over-12s four months after second dose; Belgium all over-18s; Britain accelerated its programme offering jabs to over-18s by end-Dec, third dose after three months; Czech Republic; Denmark will cut booster shot interval to 4-1/2 months from six months for people aged 18-39, already in place for over-40s; France had delivered nearly 24 million booster shots by Dec. 29, has cut the interval to four months from five, its regulator recommended on Dec. 24 administering boosters three months after first course; Germany all over-18s; recommends booster after three months; Greece three months after second vaccine shot or positive test, down from six months previously; Hungary; Ireland all adults; Italy for over-40s, will be made available to all over-18s; Malta all over-12s; Netherlands starting with over-60s, booster gap of three months; Norway; Poland; Russia; Romania has only approved Pfizer or Moderna boosters; Serbia; Slovakia; Spain Pfizer or Moderna booster shots for all inoculated with J&J; Sweden will begin gradual rollout to all adults; Switzerland recommends booster with an mRNA vaccine from 4 months after the primary vaccination course for over-16s;

** Bulgaria; Finland may expand to other Finns later, booster gap narrowed to 3 months; Lithuania; Portugal to offer to a quarter of its population by the end of January, including over-50s inoculated with J&J vaccine; Slovenia; Spain has expanded to over-40s from over-60s to over-40s;

A few African countries are offering boosters amid the continent's low inoculation rates - only 7.5% of Africa's population are fully vaccinated, according to WHO.

These African countries are offering boosters to adults after they receive a full dose of a vaccine:

** Egypt on Dec. 16 approved booster shots for those who received their second shot at least six months ago. It had earlier approved boosters for the most vulnerable groups.

** Morocco, which has administered the most doses in Africa and started giving a third dose in October.

** Nigeria started to offer booster shots on Dec. 10 to those fully vaccinated.

** Zambia started booster jabs on Dec. 27 for over-18s, prioritising health workers and later those with health conditions that made them vulnerable.

** India will start giving booster doses for healthcare and frontline workers from Jan. 10 as cases of the Omicron variant are rising across the country.

** Kuwait will require incoming travellers to have the booster shot if more than nine months have passed since their vaccination.

** Bahrain Sputnik V to all over-18s at least six months after second dose; Cambodia AstraZeneca; Indonesia to health workers only, wider population planned in 2022); Israel all over-12s, offers fourth dose to the immunocompromised, elderly in care facilities; health ministry recommended a fourth dose to over-60s and those who received a booster shot at least four months ago); Malaysia over-18s; mandatory for over-60s, those vaccinated with Sinovac, and high-risk groups; Philippines has halved to three months the waiting time for a booster; Singapore booster gap reduced to 5 months); South Korea reduced the booster gap for all adults to three months; Taiwan booster gap reduced to 5 months; Thailand AstraZeneca or mRNA-type booster shots offered to people inoculated with Sinovac, second dose after 3 months; Turkey; UAE mandatory for people inoculated with Sinopharm vaccine.

** Bangladesh over-60s; Bhutan over-65s as well as priority groups such as health workers, sufferers from chronic medical problems among others; China; Hong Kong; Japan started administering boosters to health care workers in early Dec., will offer shots to elderly from January after 6 months from last dose vs 8 previously.

AUSTRALIA began administering Pfizer COVID booster shots in November to fully vaccinated adults. It will cut the interval for booster shots to four from five months from Jan. 4 and reduce it to three months by the end of January.

** Brazil; Cuba from Jan. 2022; Honduras; Panama cut the rollout time for boosters to three from six months for over-16s; Uruguay offers a Pfizer dose for those fully vaccinated with Sinovac).

These countries are offering boosters only to the immunosuppressed:

** Ecuador, but to offer boosters for general population from January.

These countries are offering boosters to elderly, vulnerable and at-risk people: