The U.S. Indo-Pacific Command called it a ballistic missile launch and the U.S. State Department condemned, it while repeating calls for renewed dialogue with North Korea.

"This launch is in violation of multiple U.N. Security Council Resolutions and poses a threat to the DPRK’s neighbours and the international community," a State Department spokesperson using the initials of North Korea's official name.

Hours later, Moon visited the South Korean east coast city of Goseong, near the border with North Korea, where he broke ground for a new rail line that he called "a stepping stone for peace and regional balance" on the Korean peninsula.

Moon acknowledged the launch raised concerns of tensions, and called for North Korea to make sincere efforts for dialogue.

"We should not give up the hope for dialogue in order to fundamentally overcome this situation," he said. "If both Koreas work together and build trust, peace would be achieved one day."

Moon, who has led unprecedented efforts to engage with North Korea, has stuck to what many analysts see as a forlorn hope for a diplomatic breakthrough before his five-year term ends in May.

Reconnecting the two Koreas by rail was a central issue in meetings between Kim and Moon in 2018, but the efforts went nowhere as talks aimed at convincing North Korea to surrender its nuclear weapons in exchange for easing international sanctions faltered in 2019.

Kim's New Year speech made no mention of efforts by South Korea to restart negotiations or U.S. calls for dialogue.

South Korea's National Security Council convened an emergency meeting, expressing concern that the launch "came at a time when internal and external stability is extremely important" and calling on North Korea to return to talks.

"Our military is maintaining readiness posture in preparation for a possible additional launch while closely monitoring the situation in close cooperation with the United States," the JCS said.

The latest launch comes ahead of talks between the U.S. and Japanese foreign and defence ministers on Friday.

U.N. Security Council resolutions ban all ballistic missile and nuclear tests by North Korea, and have imposed sanctions over the programmes.

Since the start of the COVID-19 pandemic, North Korea has become even more isolated, imposing border lockdowns that have slowed trade to a trickle and have prevented in-person diplomatic engagements.

It has stuck to a self-imposed moratorium on testing its largest intercontinental ballistic missiles or nuclear weapons since 2017, but has test fired a variety of new, short-range ballistic missiles, including one from a submarine https://www.reuters.com/world/asia-pacific/nkorea-says-it-conducted-successful-missile-test-submarine-kcna-2021-10-19 in October.

It argues it should not be penalized for developing weapons other countries already possess.

At a regular news conference on Wednesday, Chinese foreign ministry spokesman Wang Wenbin urged all parties to "bear in mind the bigger picture", cherish the "hard won" peace and stability on the peninsula and stick to the use of dialogue and consultation to reach political settlement.

(Reporting by Chang-Ran Kim and Ju-min Park in Tokyo, Hyonhee Shin and Josh Smith in Seoul, David Brunnstrom in Washington and Emily Chow in Beijing; Writing by Josh Smith; Editing by Jonathan Oatis and Alistair Bell) 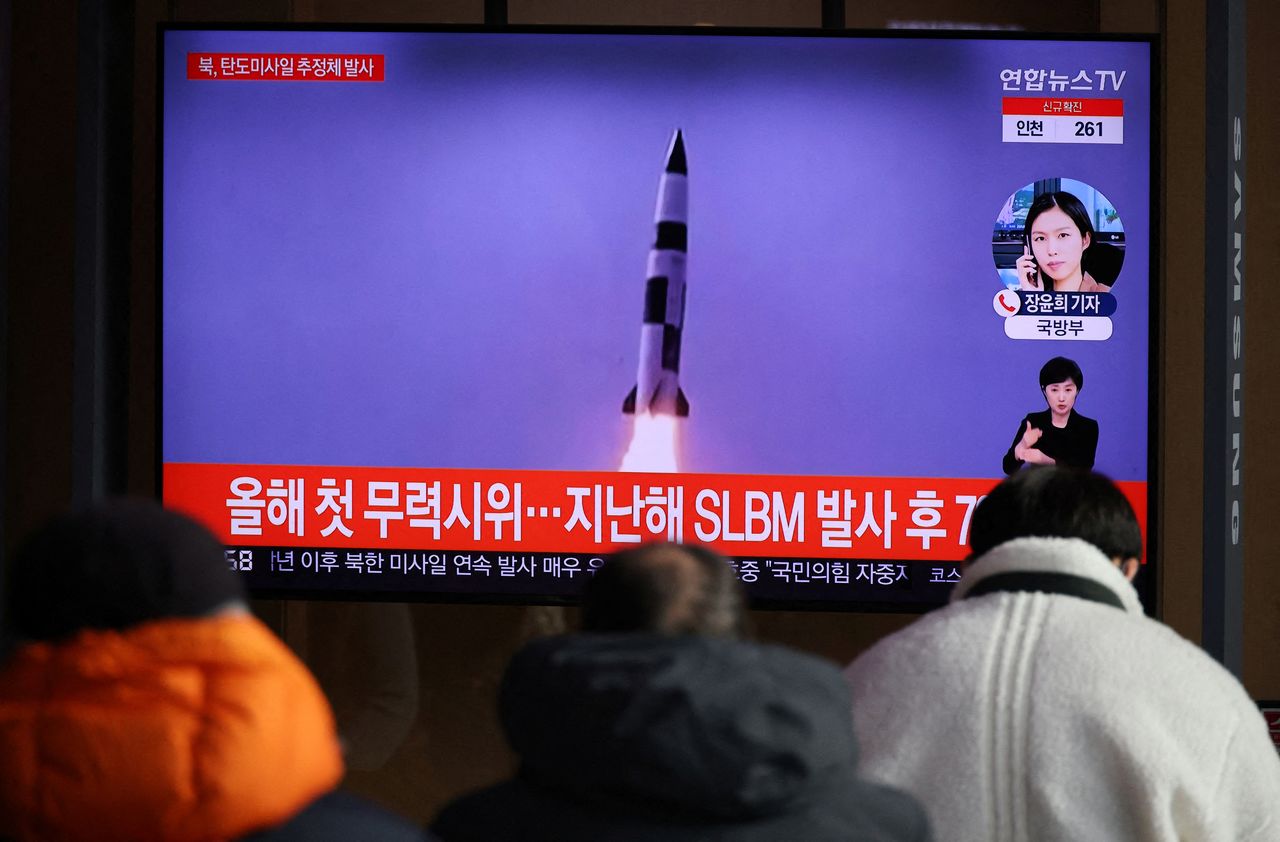 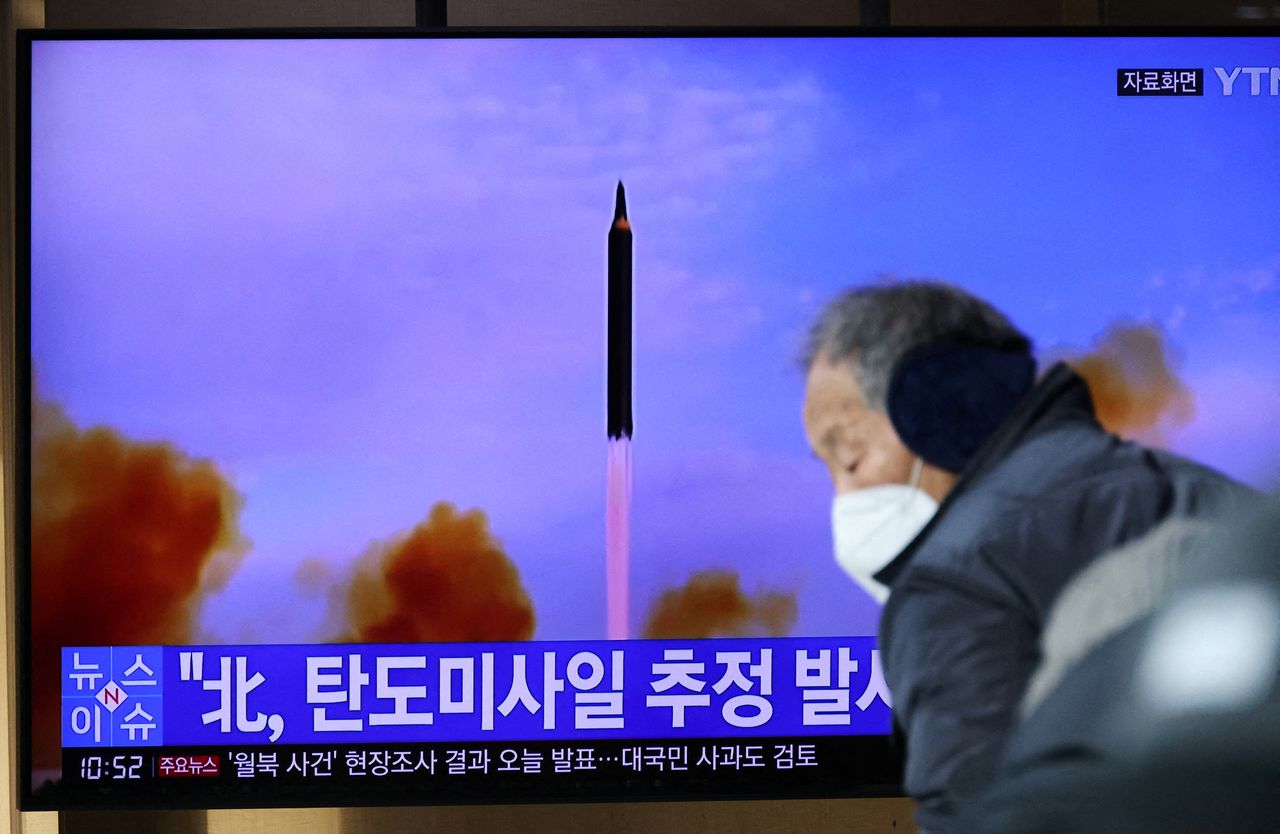 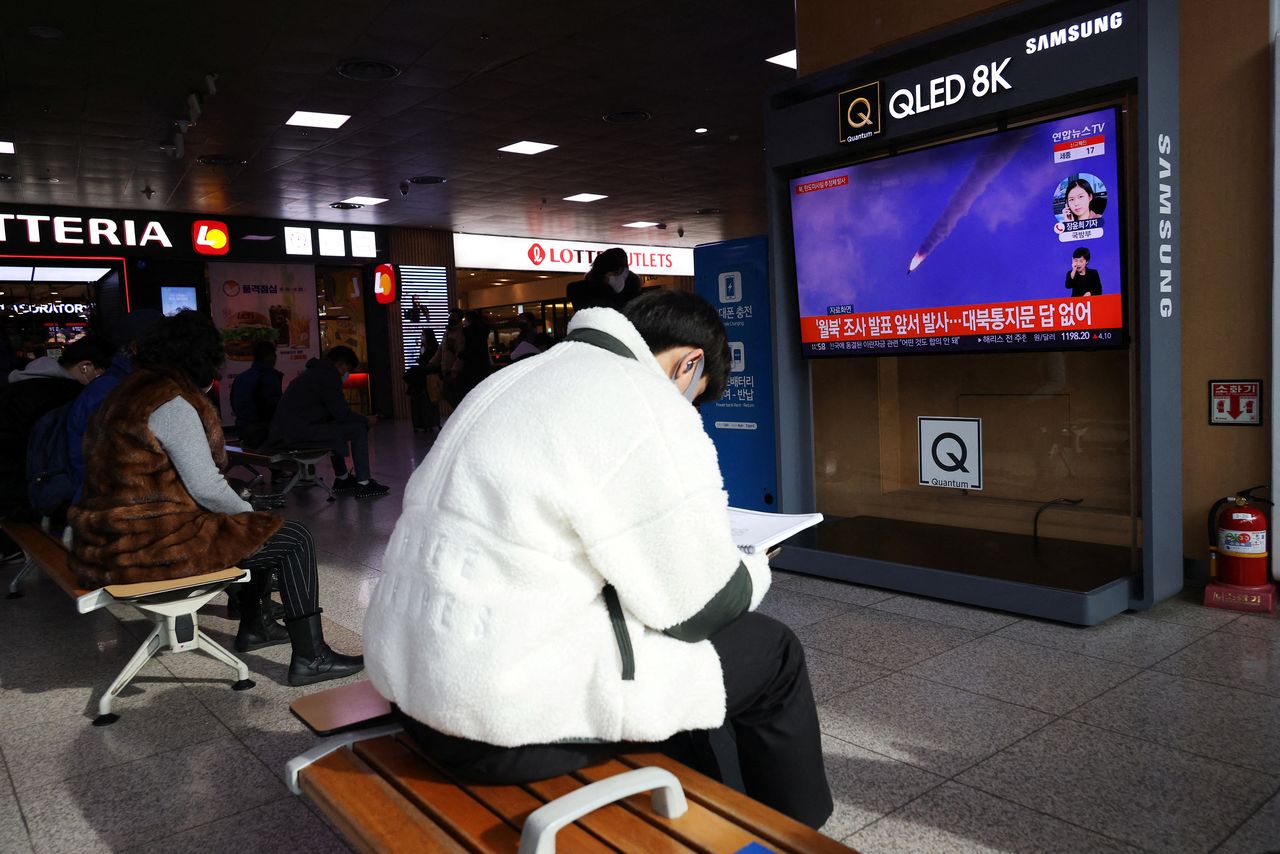 A man sits in front of a TV broadcasting file footage of a news report on North Korea firing a ballistic missile off its east coast, in Seoul, South Korea, January 5, 2022. REUTERS/Kim Hong-Ji 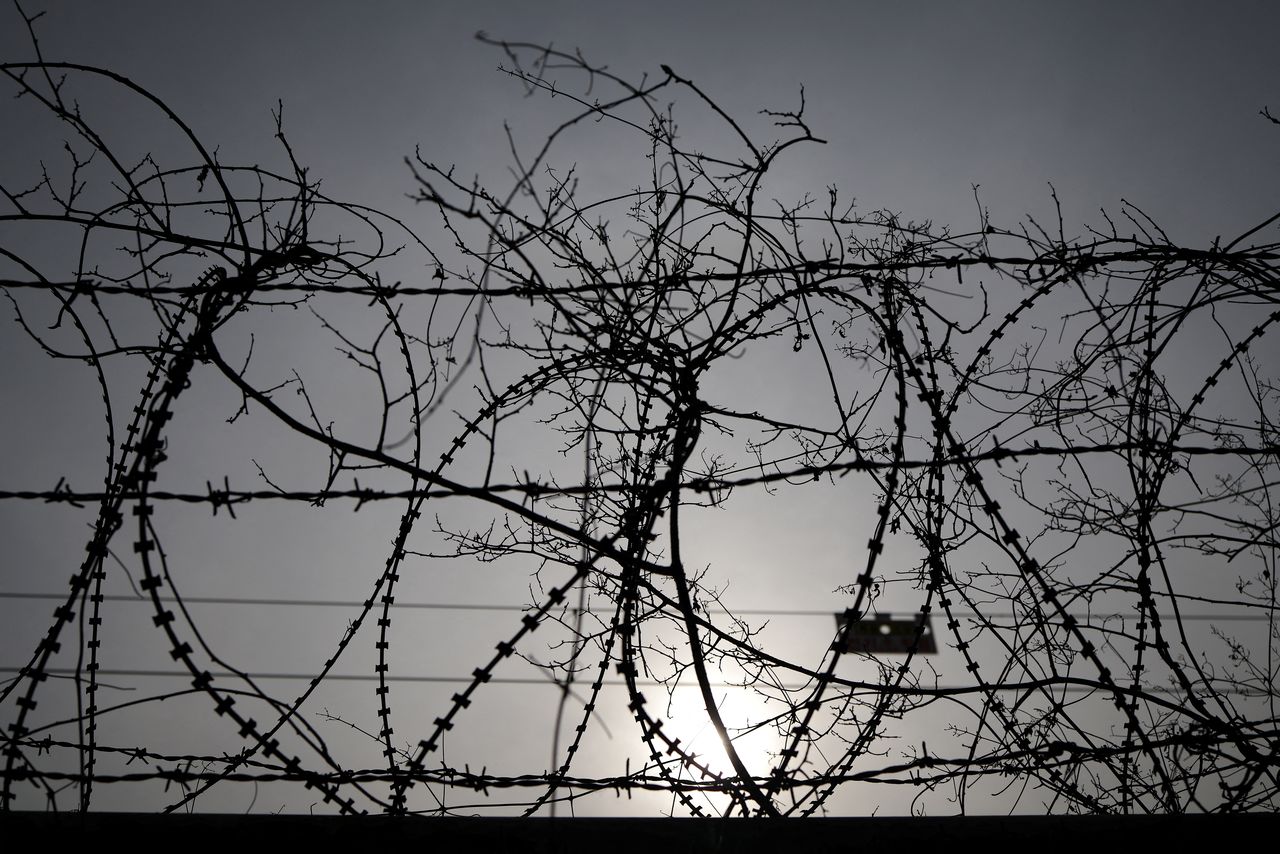 A dead tree and a military fence are intertwined near the demilitarised zone which separates the two Koreas in Paju, South Korea, January 5, 2022. REUTERS/Kim Hong-Ji 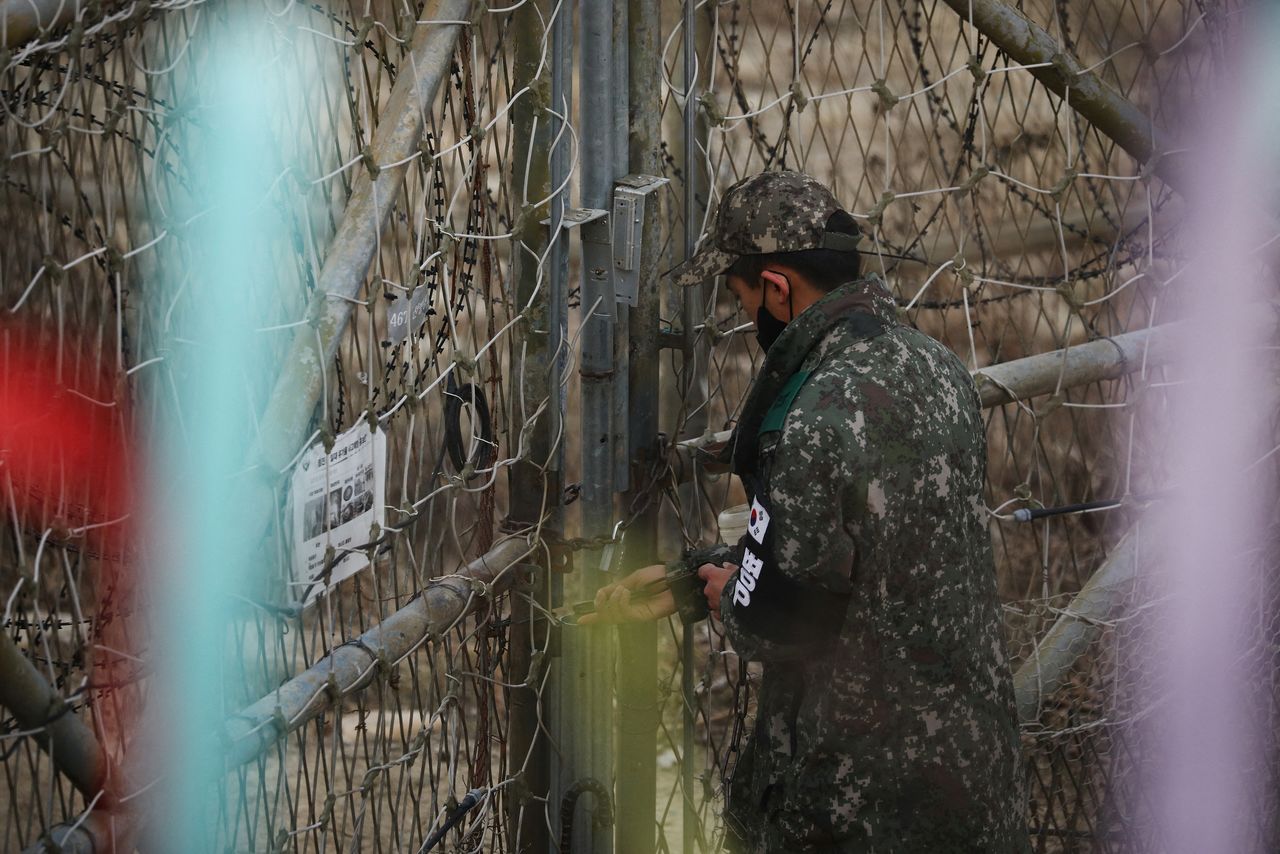 A South Korean soldier locks an entrance to a guard post near the demilitarised zone which separates the two Koreas in Paju, South Korea, January 5, 2022. REUTERS/Kim Hong-Ji