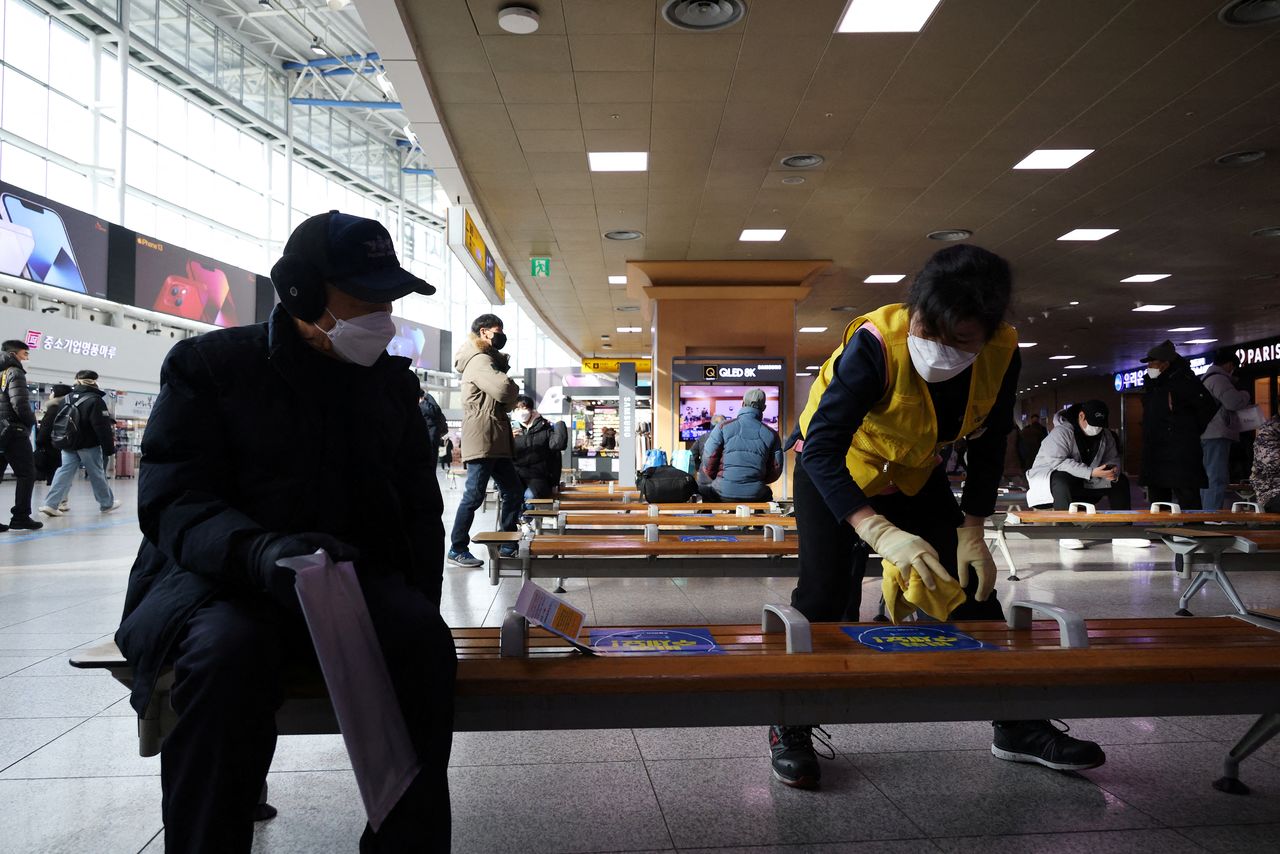 An employee disinfects a bench as a man wearing a mask to prevent contracting the coronavirus disease (COVID-19) looks on at a railway station in Seoul, South Korea, January 5, 2022. REUTERS/Kim Hong-Ji

(Reuters) - At nearly 1 million new COVID-19 infections, the United States reported the highest daily tally of cases by any country in the world, while the disease spread unabatedly in many nations, with India and Japan witnessing doubling of fresh cases in just days.

* Sweden's King Carl XVI Gustaf and Queen Silvia have tested positive for COVID-19, the palace said in a statement on Tuesday.

* Germany needs to offer booster shots to an additional 15 million people to slow the spread of the Omicron strain and hopefully avoid a rush on intensive care units, its health minister said.

* The United States' global record of nearly 1 million new infections mark an almost doubling from its previous peak seen a week ago.

* The Biden administration doubled its order for Pfizer's oral COVID-19 antiviral treatment, the company and the White House said on Tuesday.

* The U.S. Centers for Disease Control and Prevention said people seeking to end their COVID-19 isolation at five days can opt for a rapid antigen test, but stopped short of mandating the test despite pressure by health experts.

* BlackRock Inc and American Express are extending their hybrid work plans as the Omicron variant spreads across the United States.

* Five cruise ships in Brazilian waters have reported 214 cases among their crew and passengers, including two ships that are in quarantine in the port of Santos.

* A few central Chinese cities imposed varying degrees of curbs after sporadic cases, ahead of the upcoming Winter Olympics and Lunar New Year holiday, with the city of Yuzhou ordering its 1.1 million residents not to leave town since Jan. 2.

* India reported 58,097 new cases, twice the number seen only four days ago, with authorities in the capital city of Delhi and the technology hub of Bengaluru ordering people to stay home over coming weekends.

* Japan's Okinawa saw cases more than doubling on Wednesday from the previous day, as officials considered imposing emergency steps to contain it.

* Australia's daily cases hit a record high for a third consecutive day on Wednesday, further straining hospital resources and testing facilities as public anger grows over the handling of the Omicron outbreak.

* Coronavirus infections are surging across several Gulf Arab states, with the daily number of cases more than doubling in Saudi Arabia over two days to more than 2,500 and crossing the 1,000-level in Qatar and Kuwait.

* U.S. health officials are weighing the role of COVID-19 tests as part of their new guidelines shortening quarantines for people without symptoms, saying more details could come within days.

* Record numbers of U.S. workers leaving their jobs and a slowdown in hiring at front-line businesses may show that the latest COVID-19 wave is denting labour supply.

* The International Monetary Fund will release its World Economic Outlook on Jan. 25, a week later than planned, to factor in the latest COVID-19 developments, a spokesperson for the global lender said.

* Thailand's outbreak of the Omicron variant could have a larger and more prolonged impact than expected on an economic recovery, according to minutes of the central bank's last policy meeting.