The launch on Wednesday was the first by North Korea since October and was detected by several militaries in the region, drawing criticism from governments in the United States, South Korea, and Japan.

Hypersonic weapons usually fly towards targets at lower altitudes than ballistic missiles and can achieve more than five times the speed of sound - or about 6,200 kms per hour (3,850 mph).

Despite their name, analysts say the main feature of hypersonic weapons is not speed - which can sometimes be matched or exceeded by traditional ballistic missile warheads - but their manoeuvrability.

In Wednesday's test, the "hypersonic gliding warhead" detached from its rocket booster and manoeuvred 120 kms (75 miles) laterally before it "precisely hit" a target 700 kms (430 miles) away, KCNA reported.

The test also confirmed components such as flight control and its ability to operate in the winter, KCNA added.

"The successive successes in the test launches in the hypersonic missile sector have strategic significance in that they hasten a task for modernizing strategic armed force of the state," the KCNA report said.

While it has not tested nuclear bombs or long-range intercontinental ballistic missiles (ICBMs) since 2017, in recent years North Korea has developed and launched a range of more manoeuvrable missiles and warheads likely aimed at being able to overcome missile defences like those wielded by South Korea and the United States, analysts have said.

"My impression is that the North Koreans have identified hypersonic gliders as a potentially useful qualitative means to cope with missile defence," said Ankit Panda, a senior fellow at the U.S.-based Carnegie Endowment for International Peace.

Hypersonic weapons are considered the next generation of arms that aim to rob adversaries of reaction time and traditional defeat mechanisms.

Last month the United States completed construction of a massive, $1.5 billion long-range radar for a homeland missile defence system in Alaska that it says can track ballistic missiles as well as hypersonic weapons from countries such as North Korea.

Photos of the missile used in Wednesday's test show what analysts said is a liquid-fueled ballistic missile with a conical-shaped Manoeuvrable Reentry Vehicle (MaRV) blasting off from a wheeled launch vehicle in a cloud of flame and smoke.

It is a different version than the weapon tested last year, and was first unveiled at a defence exhibition in Pyongyang in October, Panda said.

"They likely set up at least two separate development programmes," he added. "One of these was the Hwasong-8, which was tested in September. This missile, which shares a few features in common with the Hwasong-8, is another."

In a call with Japanese Foreign Minister Yoshimasa Hayashi on Thursday, U.S. Secretary of State Antony Blinken condemned the North Korea missile launch and discussed cooperation to achieve complete denuclearization and lasting peace on the Korean Peninsula, the U.S. State Department said in a statement.

"We take any new capability seriously, and as we've said, we condemn (North Korea's) continued testing of ballistic missiles, which are destabilizing to the region and to the international community," a State Department spokesperson said later.

Talks aimed at persuading North Korea to surrender its nuclear weapons and ballistic missile arsenal have been stalled since a series of summits between leader Kim Jong Un and then-U.S. President Donald Trump broke down with no agreement.

U.S. President Joe Biden's administration has said it is open to talking to North Korea, but Pyongyang has said American overtures are empty rhetoric without more substantive changes to "hostile policies" such as military drills and sanctions.

The latest test came just hours before South Korean President Moon Jae-in attended a groundbreaking ceremony for a rail line he hopes will eventually connect the divided Korean peninsula, casting doubts over his hopes for an eleventh-hour diplomatic breakthrough with North Korea before his five-year term ends in May.

"We hope that all sides ... speak and act cautiously, persist in the correct direction of dialogue and consultation, and together work towards moving forward the political settlement of the peninsular question," China's foreign ministry spokesman Wang Wenbin said at a daily briefing on Thursday. 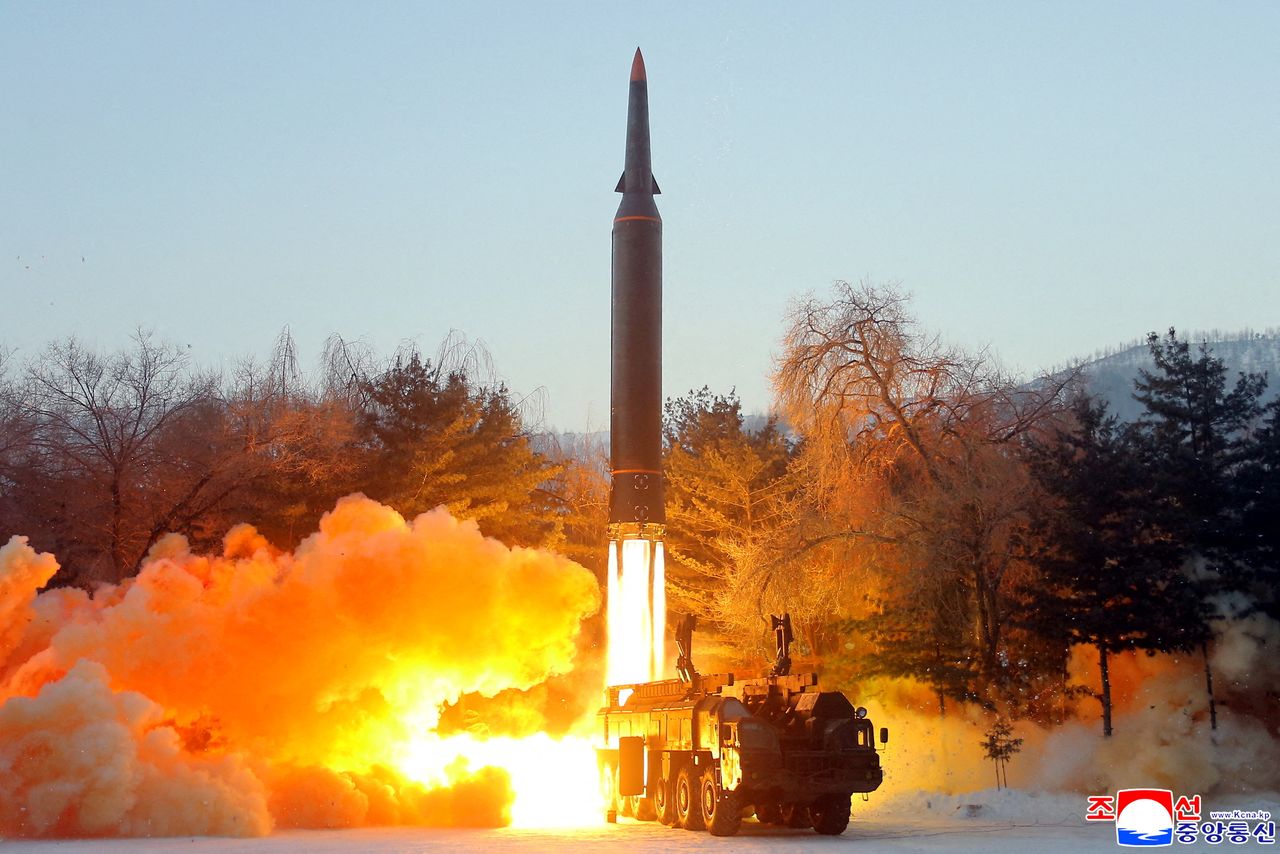 A view of what state news agency KCNA reports is the test firing of a hypersonic missile at an undisclosed location in North Korea, January 5, 2022, in this photo released January 6, 2022 by North Korea's Korean Central News Agency (KCNA). KCNA via REUTERS 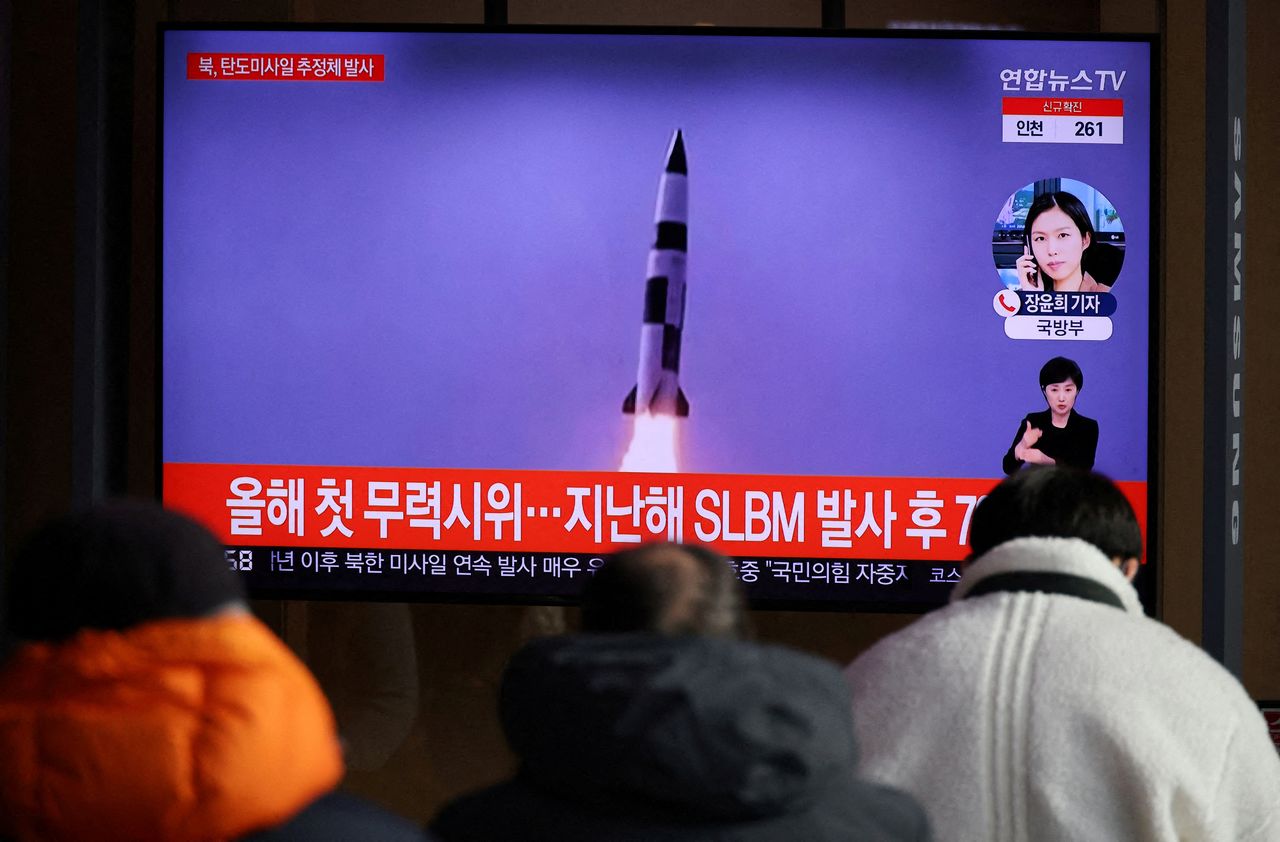