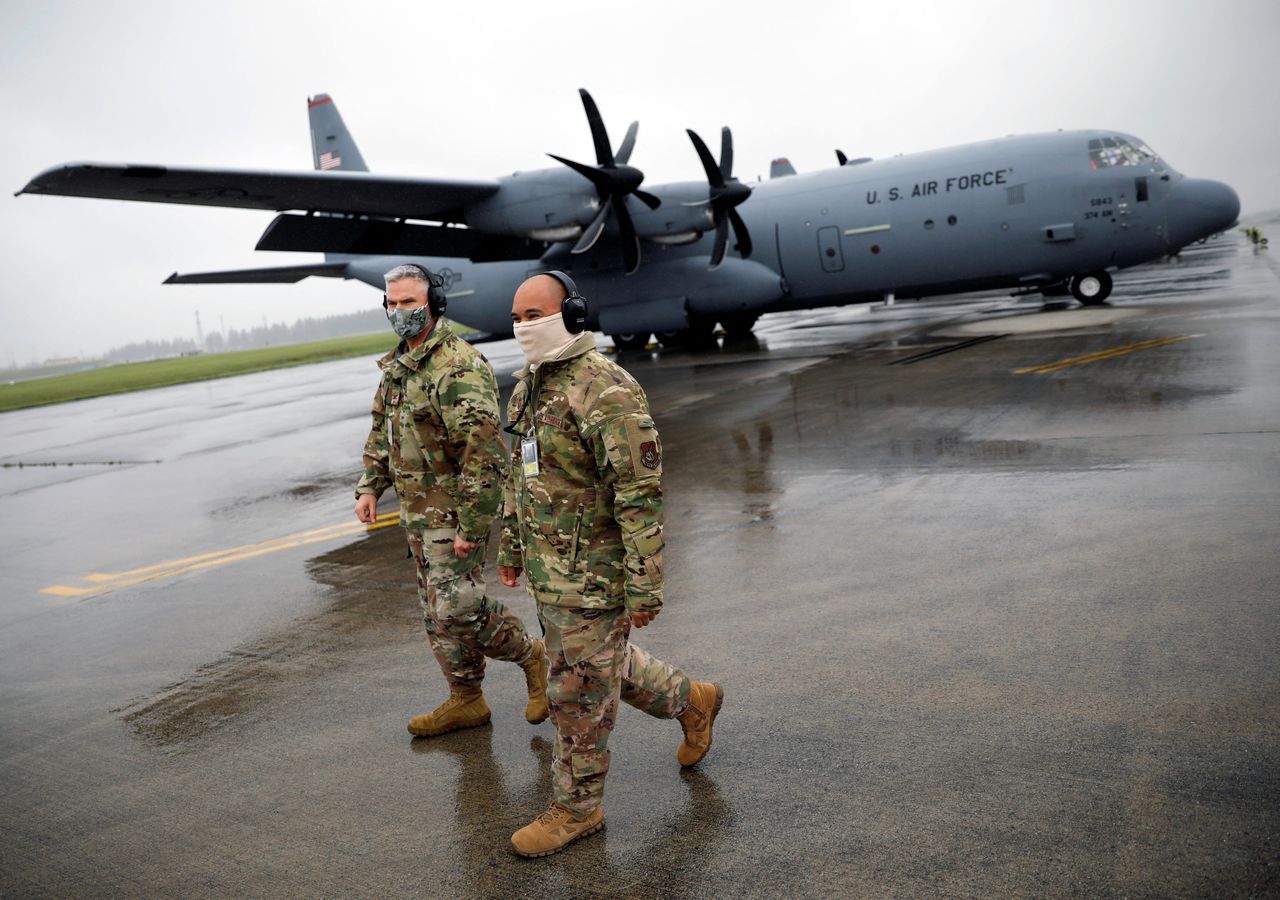 FILE PHOTO: U.S. soldiers wearing protective face masks are seen in front of C-130 transport planes during a military drill amid the coronavirus disease (COVID-19) outbreak, at Yokota U.S. Air Force Base in Fussa, on the outskirts of Tokyo, Japan May 21, 2020. REUTERS/Issei Kato

TOKYO (Reuters) - U.S. military bases in Japan introduced stricter COVID-19 measures on Thursday after the host government expressed grave concern about a surge of new infections and called for restrictions on the movement of U.S. personnel.

Three prefectures that host U.S. bases have requested quasi-emergency measures as Japan faces what some are calling a sixth wave of coronavirus infections, with cases in some places at their highest in months. One official has blamed U.S. military personnel for spreading the Omicron variant.

Japanese Prime Minister Fumio Kishida said on Thursday that a decision on the quasi-emergency measures would be made on Friday after consultations with experts.

U.S. Forces Japan said that due to an increase in COVID-19 cases at installations and throughout Japan, it was establishing more stringent measures, including requiring personnel to wear masks off base and stricter testing.

"The mitigation measures we have instituted...are intended to protect our force's readiness, the well-being of our families, and the health of Japan's citizens," the force said in a statement.

"We recognise we all have a part to play in keeping our communities safe."

More than 100,000 U.S. service members, dependents and contractors are stationed in Japan.

Kishida told reporters that he had told Hayashi to request further steps from the U.S. military when he and Defence Minister Nobuo Kishi talk via video with their U.S. counterparts on Friday in "two-plus-two" consultations.

"I've instructed the foreign minister to take advantage of the two-plus-two meeting and to firmly ask the U.S. side to take strict (anti-infection) measures swiftly," he said.

Nationwide, new infections hit 4,475 on Thursday, according to national broadcaster NHK, the most since Sept. 18.

Tokyo reported 690 cases, up from 390 on Wednesday, and an expert panel said about 45% of infections in the capital were due to Omicron. Japan's total death toll from the pandemic stands at 18,397 people.

The southern prefecture of Okinawa, host to 70% of U.S. military facilities in Japan, is at the epicentre of Japan's latest surge of cases, and it asked the central government on Thursday to impose new restrictions, which were likely to include limiting the opening hours of restaurants and bars.

Announcing the request, Okinawa Governor Denny Tamaki said new cases there were expected to surge to about 980 on Thursday from 623 the day before.

Tamaki told reporters this week he was "furious" about what he called inadequate infection controls at U.S. bases that allowed the Omicron variant to spread to the public.

The western prefectures of Hiroshima and Yamaguchi, which also host U.S. military facilities, said they would also request similar measures. Various levels of emergency controls had been in place over most of Japan last year until their lifting on Sept. 30.

Japan halted the entry of almost all foreign travellers in late November after the World Health Organization listed Omicron as a variant of concern.

But the U.S. military moves staff in and out under a separate testing and quarantine regime.

A U.S. Marine Corps station in Yamaguchi prefecture said on Thursday it discovered 115 new cases, after 182 announced the previous day.