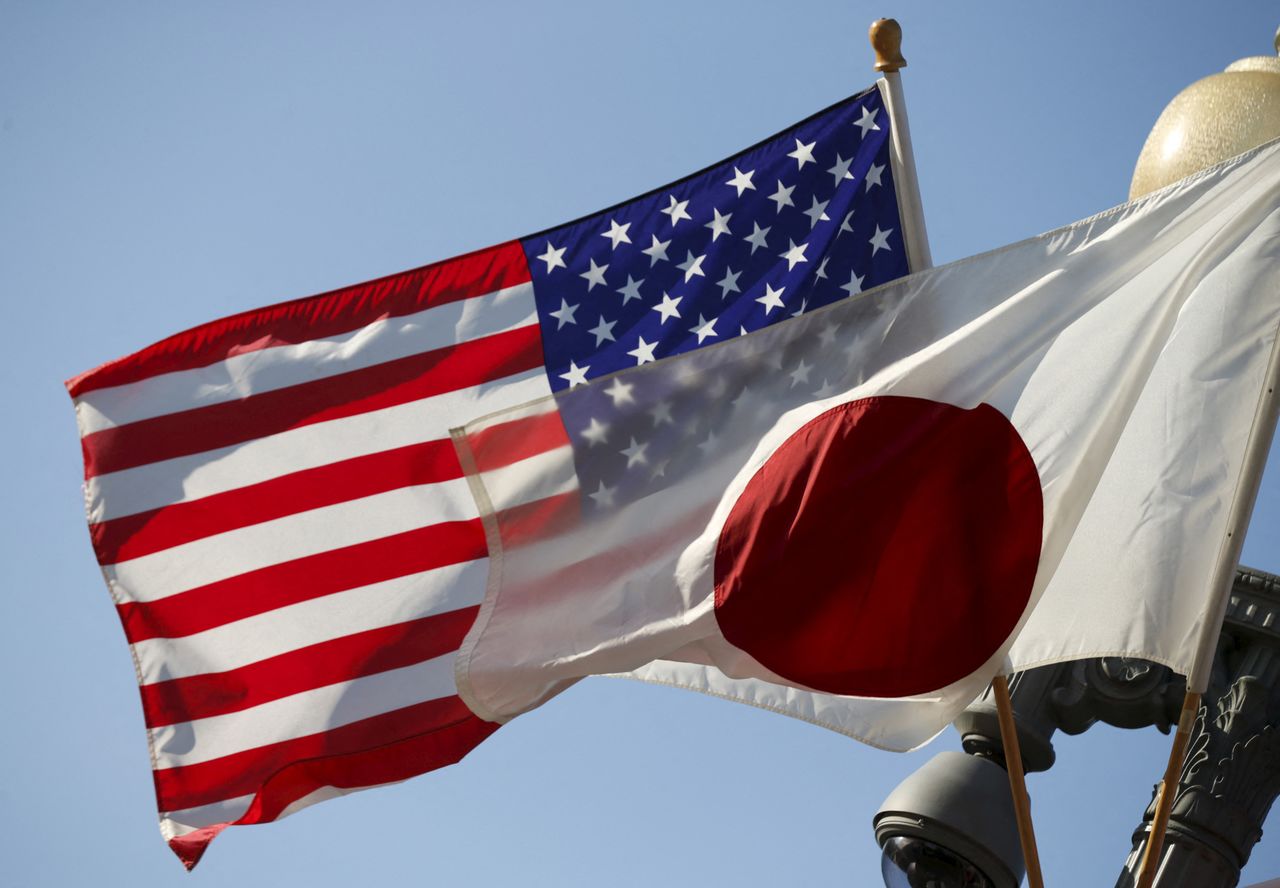 FILE PHOTO: The U.S. and Japan flags fly together outside the White House in Washington April 27, 2015. REUTERS/Kevin Lamarque

By Ju-min Park and David Brunnstrom

TOKYO/WASHINGTON (Reuters) - The United States and Japan on Friday voiced strong concern about China's growing might in unambiguous terms and pledged to work together against attempts to destabilise the region.

The comments from the two allies, in a joint statement that followed a virtual meeting of their foreign and defence ministers, highlight how deepening alarm about China - and growing tension over Taiwan - have put Japan's security role in focus.

The ministers expressed concerns that China's efforts "to undermine the rules-based order" presented "political, economic, military and technological challenges to the region and the world", according to their statement.

"They resolved to work together to deter and, if necessary, respond to destabilising activities in the region," it said.

The ministers also said they had "serious and ongoing concerns" about human rights in China's Xinjiang and Hong Kong regions and stressed the importance of peace and stability in the Taiwan Strait.

In a separate virtual summit on Thursday, Japan and Australia signed a defence cooperation agreement.

"We deplore and firmly oppose the gross interference in China's internal affairs by the U.S., Japan and Australia and the fabrication of false information to smear China and undermine the solidarity and mutual trust of countries in the region," foreign ministry spokesman Wang Wenbin told a daily briefing in Beijing.

Pacifist Japan has close economic ties to China but is increasingly concerned that it could move against democratic Taiwan, which it claims as part of China.

"This is clearly a combined message reflecting a common concern, not a case of U.S. arm-twisting to get Japan to sign onto vague euphemisms," said Daniel Russel, who served as the top U.S. diplomat for Asia under president Barack Obama and is now with the Asia Society Policy Institute.

"In particular, the expression of joint resolve to respond if necessary to destabilising activities comes across as a powerful expression of alliance solidarity and determination."

He said the alliance "must not only strengthen the tools we have, but also develop new ones", citing Russia's military buildup against Ukraine, Beijing's "provocative" actions over Taiwan and North Korea's latest missile launch. North Korea fired a "hypersonic missile" this week that successfully hit a target, its state news agency said.

Russia, China and the United States are also racing to build hypersonic weapons, whose extreme speed and manoeuvrability make them hard to spot and block with interceptor missiles.

As its neighbours test hypersonic missiles, Japan has been working on electromagnetic "railgun" technology to target them.

Jeffrey Hornung, an expert in Japanese security policy at the Rand Corporation, a U.S.-backed think tank, said while Japan's options for using force are limited, it might deem a Taiwan emergency as threatening its own survival.

"There is no coded messaging here," Hornung said.

"China is the challenge and they said as much, then detailed all the ways the alliance is determined to work to counter its destabilising activities."