Factbox: Front runners in development of antibody drugs against COVID-19

(Reuters) - AstraZeneca, Eli Lilly, Regeneron and GlaxoSmithKline are among the biggest pharmaceutical companies to have developed COVID-19 treatments using a class of drugs called monoclonal antibodies, but the spread of the highly contagious Omicron variant has put the therapies' effectiveness into question.

* On Dec. 8, the U.S. regulator FDA authorised use of Evusheld to prevent COVID-19 infections in people with weak immune systems or a history of severe side effects from coronavirus vaccines.

* The EU drug regulator is reviewing the treatment.

* In June, AstraZeneca said a trial had not shown the therapy could stop individuals exposed to coronavirus from contracting it.

* Later trials showed Evusheld reduced the risk of people developing COVID-19 symptoms by 77% and that it lessened the risk of severe illness or death by 50% in non-hospitalised patients who have had symptoms for seven days or less.

* Evusheld is effective against the Omicron coronavirus variant, AstraZeneca said.

* AstraZeneca said in March it would supply up to 500,000 more doses to the United States, extending a prior agreement.

* Britain also has an in-principle agreement for over a million doses.

* In February last year it was granted an Emergency Use Authorization (EUA) by the FDA for treatment of high-risk patients, but the U.S. paused distribution in December, saying the therapy was unlikely to be effective against the Omicron coronavirus variant.

* In late October, Eli Lilly withdrew its request for EU authorisation, saying lack of demand in the bloc did not justify submitting further data.

* The combination helped cut risk of hospitalisation and death in patients by 70%, early data from a late-stage trial showed in January last year.

* Eli Lilly announced in September an agreement to supply up to 220,000 doses to the European Union.

* The United States bought 100,000 doses of the antibody cocktail in February, followed by 388,000 doses of etesevimab in September. The country had already committed to buying a total of 1,450,000 doses of bamlanivimab alone.

* It was shown to work as well as a shot in the arm as when administered as an infusion.

* It received approval as a COVID-19 treatment in Japan in September and in Britain and the EU in December.

* Analysis shows the drug is effective against the new Omicron variant.

* It is being studied as a possible treatment for hospitalised patients in a British study.

* In a late-stage study, it resulted in a 79% reduction in risk of hospitalisation for more than 24 hours or death due to any cause.

* The United States has signed contracts worth about $1 billion to secure the treatment, with supply expected by Dec. 17.

* The single-dose antibody cocktail Ronapreve, known as REGEN-COV in the U.S. and developed by Regeneron and Roche, is a combination of two antibodies (casirivimab and imdevimab) and can be taken via injection or infusion.

* In mid-July, Japan became the first country to authorise the treatment, swiftly followed by the United States and Britain.

* The U.S. paused distribution in December, saying the therapy was unlikely to be effective against the Omicron coronavirus variant.

* REGEN-COV has received emergency approval from more than 20 countries for both the prevention and treatment of COVID-19.

* The EU drug regulator recommended Ronapreve for treatment in patients over 12 who do not require oxygen support and are at high risk of severe disease, and for prevention in people over 12 weighing at least 40 kilograms (88 lb).

* Data from a late-stage trial shows a single dose reduced the risk of contracting COVID-19 by 81.6% in the following two to eight months while a separate study showed the treatment reduced by 20% the risk of death for hospitalised patients whose immune systems had not produced a response.

* Earlier, it was announced REGEN-COV helped cut the risk of symptomatic infections by 81% among people in households where another member was ill.

* As of September, the U.S. government had purchased nearly 3 million doses.

* In June, the EU secured 55,000 doses for 37 countries, including Britain and other non-EU nations.

(Compiled by Lucinda Langlands-Perry and Valentine Baldassari in Gdansk; Editing by Milla Nissi and Kirsten Donovan) 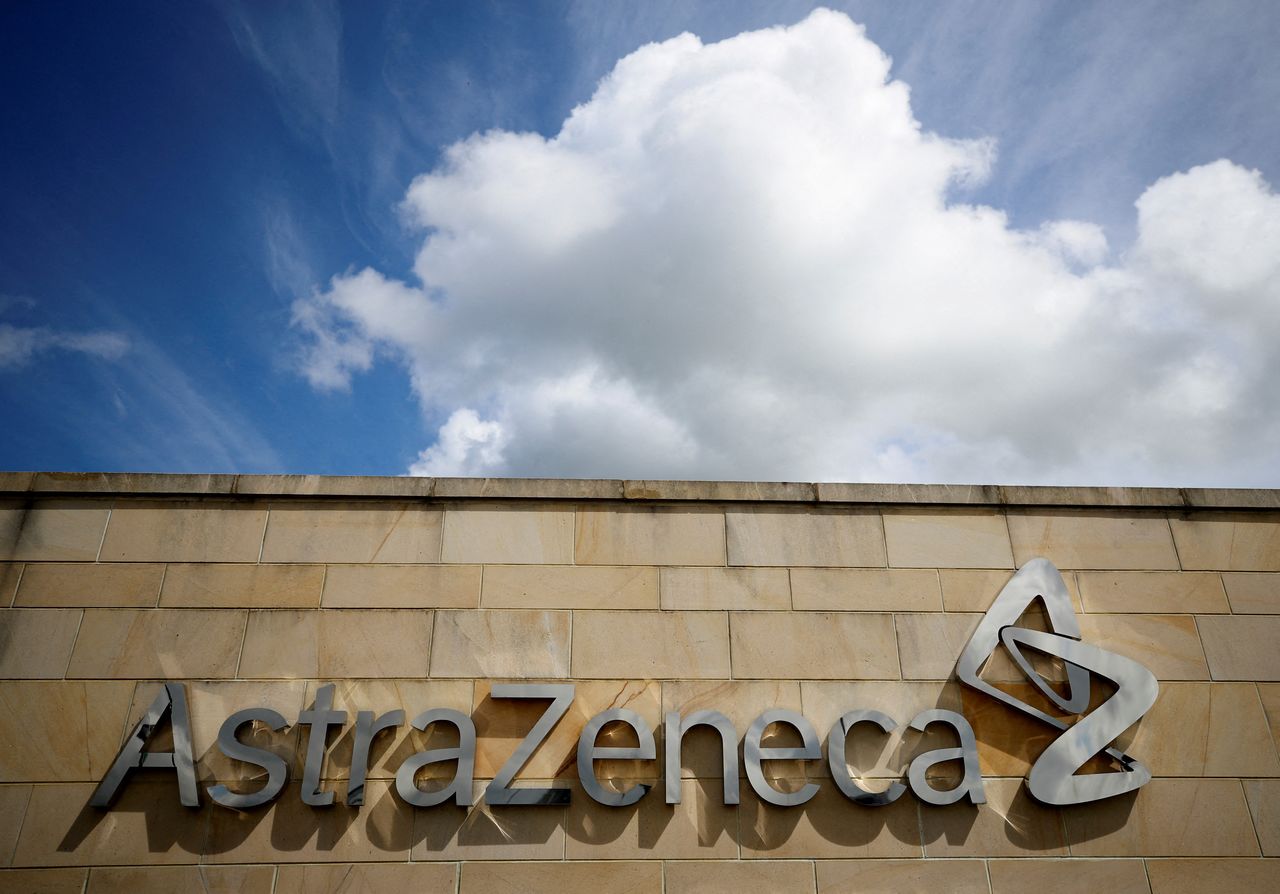 FILE PHOTO: A company logo is seen at the AstraZeneca site in Macclesfield, Britain, May 11, 2021. REUTERS/Phil Noble/File Photo 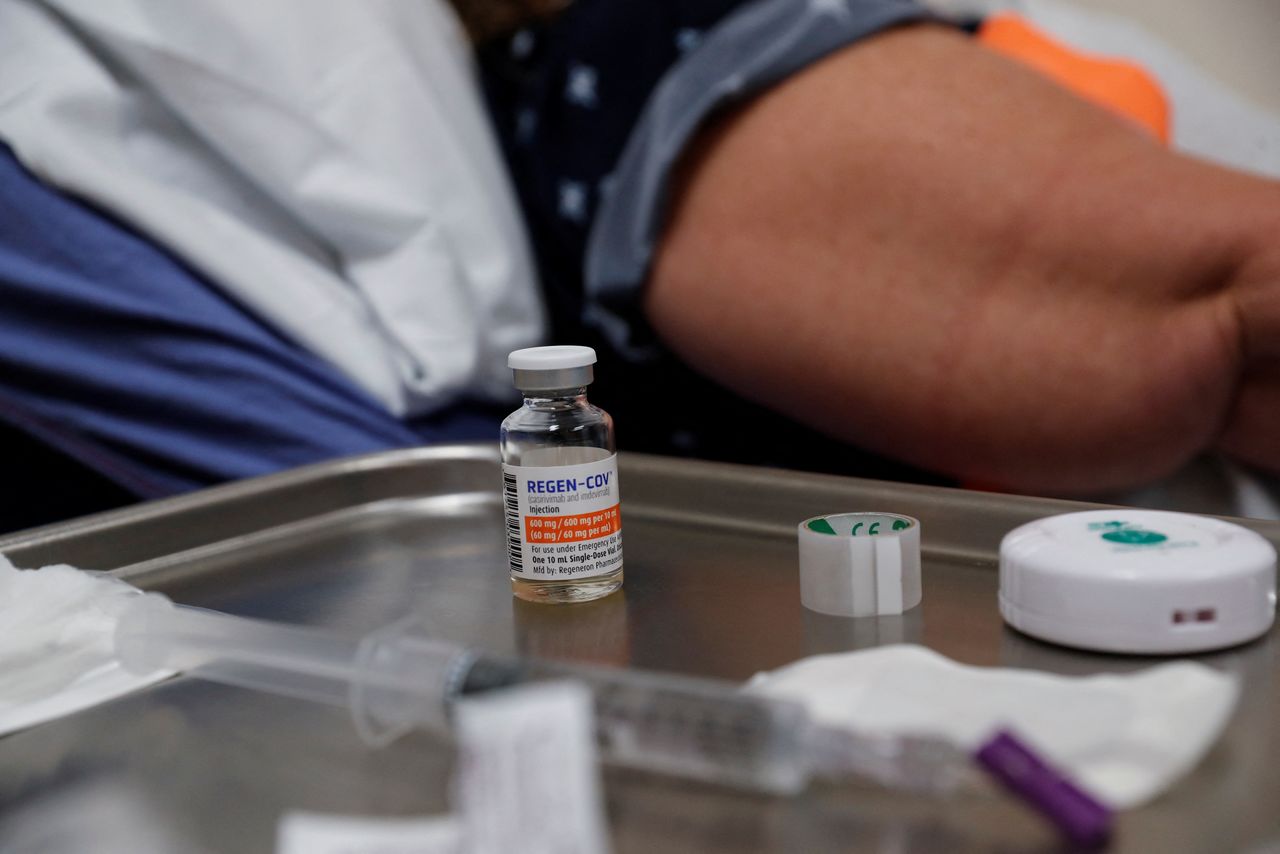 A vial of Regeneron monoclonal antibody sits on a medical table as registered nurse Jessica Krumwiede attempts to find a vein to administer it to Cathy Hardin, who was vaccinated prior to testing positive for the coronavirus disease (COVID-19), at the Sarasota Memorial Urgent Care Center in Sarasota, Florida, U.S., September 23, 2021. REUTERS/Shannon Stapleton