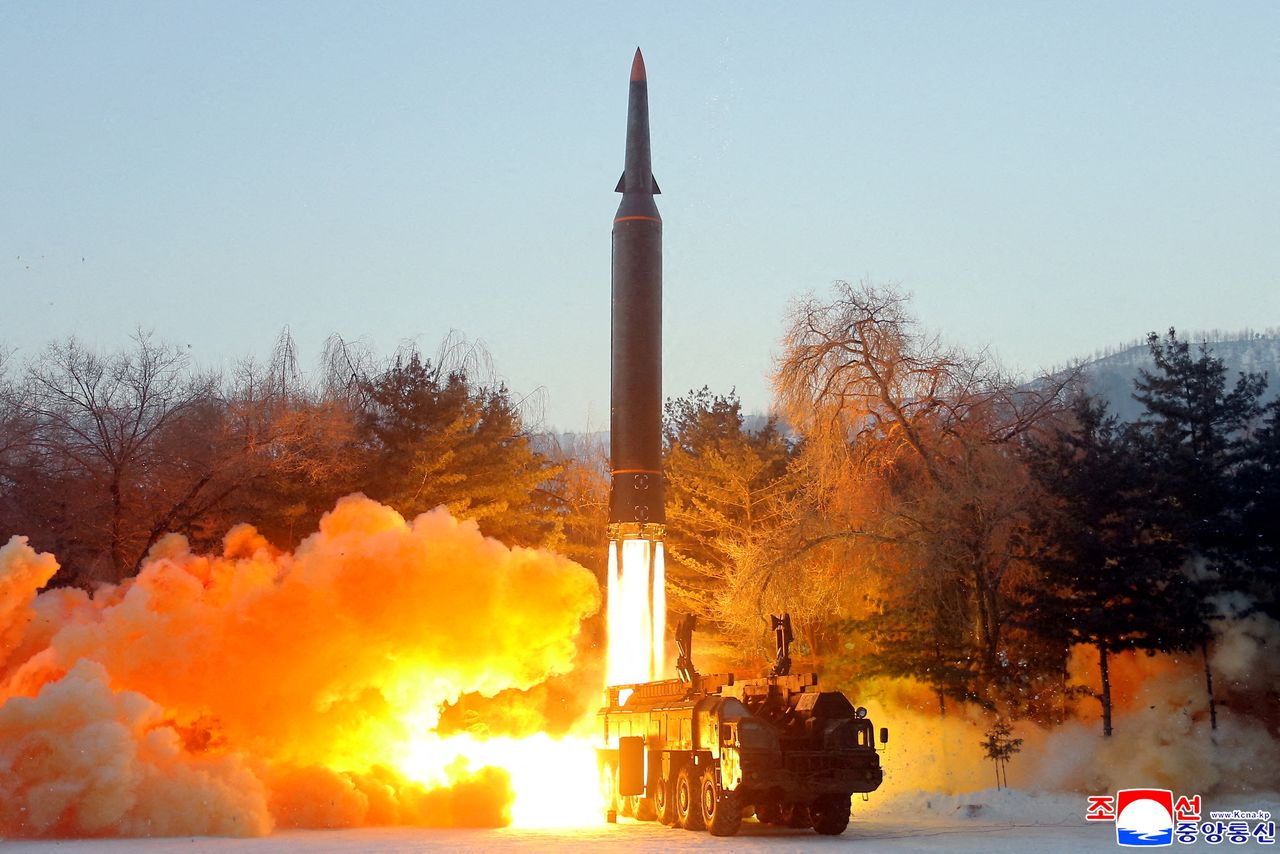 A view of what state news agency KCNA reports is the test firing of a hypersonic missile at an undisclosed location in North Korea, January 5, 2022, in this photo released January 6, 2022 by North Korea's Korean Central News Agency (KCNA). KCNA via REUTERS

SEOUL (Reuters) - North Korea began the New Year with increasingly capable missile tests, including at least one it claims was a hypersonic missile, amid an intensifying race for the next generation of long-range weapons that are harder to detect and intercept.

South Korean military officials have cast doubts https://www.reuters.com/world/asia-pacific/skorea-casts-doubts-north-koreas-hypersonic-missile-claims-2022-01-07 on North Korea's claim a missile fired last week was hypersonic, but on Tuesday officials in Seoul said the North appeared to have test fired https://www.reuters.com/world/asia-pacific/nkorea-launches-possible-ballistic-missile-japan-says-2022-01-10 another missile that flew at relatively low altitudes at up to 10 times the speed of sound (12,348 kmh/7,673 mph).

North Korea did not immediately confirm the launch. The performance and the launch location reported by South Korea, however, suggested it may be another hypersonic missile.

North Korea tested its first such missile last year, joining other countries such as China, United States and Russia, which have conducted tests of hypersonic weapons in recent months.

HOW THE MISSILES WORK

Hypersonic missiles typically launch a warhead that travels at more than five times the speed of sound - or about 6,200 km per hour (3,850 mph), often manoeuvring at relatively low altitudes.

Despite their name, analysts say the main feature of hypersonic weapons is not speed - which can sometimes be matched or exceeded by traditional ballistic missile warheads - but their manoeuvrability.

Combining a glide vehicle with a missile that can launch it partially into orbit - a so-called fractional orbital bombardment system (FOBS) - could strip adversaries of reaction time and traditional defences mechanisms.

WHO LEADS THE RACE

Last year China launched a rocket carrying a hypersonic glide vehicle that flew through space, circling the globe before cruising down toward its target, which it missed by about two dozen miles. [L1N2RD01Y]

In July, Russia successfully tested a Tsirkon (Zircon) hypersonic cruise missile, which President Vladimir Putin touted as part of a new generation of missile systems. Moscow also tested the weapon from a submarine for the first time. [L8N2R017O]

The United States said in late September that it had tested an air-breathing hypersonic weapon - meaning it sustains flight on its own through the atmosphere like a cruise missile - marking the first successful test of that class of weapon since 2013.

Days after the U.S. announcement, North Korea fired a newly developed hypersonic missile for the first time, calling it a "strategic weapon" that boosted its defence capabilities, though some South Korean analysts described the test as a failure.

The recent tests are the moves in a dangerous arms race in which smaller Asian nations are striving to develop advanced long-range missiles https://graphics.reuters.com/ASIA-MISSILES/xklpyxajkvg/asia-missiles.jpg, alongside major military powers.

Hypersonic weapons, and FOBS, could be a concern as they can potentially evade missile shields and early warning systems.

Some experts cautioned against hype surrounding missiles such as the one China tested in August.

"China already has 100 nuclear-armed ICBMs that can strike the U.S.," Jeffrey Lewis, a missile specialist at the U.S.-based James Martin Center for Nonproliferation Studies, said on Twitter at the time. "Although the glider is a nice touch ... this is an old concept that is newly relevant as a way to defeat missile defences."