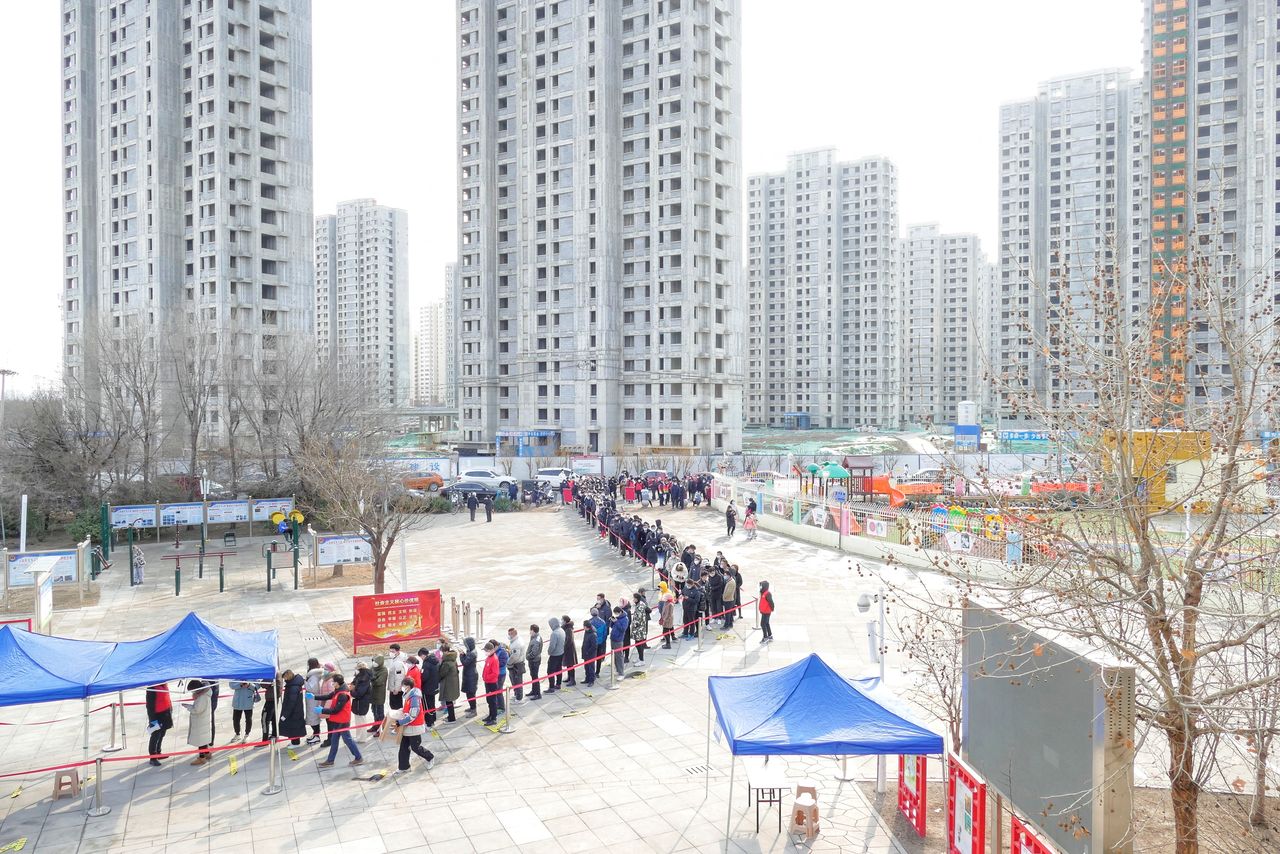 People line up for nucleic acid testing during a citywide mass testing for the coronavirus disease (COVID-19) after local cases of the Omicron variant were detected in Tianjin, China January 9, 2022. cnsphoto via REUTERS

BEIJING (Reuters) -The Chinese port city of Tianjin began a new round of testing of its 14 million residents on Wednesday to contain the Omicron variant, as analysts warned of the growing economic costs to China of curbs to extinguish clusters of coronavirus infections.

Japanese automaker Toyota said operations at its joint-venture in Tianjin, which has annual production capacity of 620,000 vehicles, had been halted since Monday due to the impact on suppliers of mandatory COVID-19 testing of city residents.

"We plan to resume operations as soon as the government's instructions and the safety and security of the local community and suppliers are confirmed and assured," Toyota said in a statement to Reuters.

China, which has stuck to what is effectively a "zero-COVID" policy, is scrambling to prevent the spread of the highly infectious Omicron variant ahead of the Lunar New Year travel season later this month - and as Beijing prepares to stage the Winter Olympics from Feb. 4.

The Games will take place in a "closed loop", without international spectators.

On Wednesday, China announced the suspension of several international flights due to positive COVID-19 cases.

Across the country, several cities are requiring those arriving from Tianjin to quarantine, and many are encouraging people to stay put during the Lunar New Year, typically the busiest time of year for travel.

Tianjin, around 100 km (62 miles) southeast of Beijing, reported 33 domestically transmitted coronavirus infections with confirmed symptoms for Tuesday, up from 10 on Monday, national data showed. It did not specify how many of the infections were Omicron, after reporting two such cases over the weekend.

Tianjin ordered a half-day off for employees at companies and other institutions on Wednesday, and required them to keep activities "relatively static" to comply with its second round of mass testing.

The state-owned manager of the city's port, the world's eighth-largest by container throughput, said operations continued as employees were tested.

China is likely to see ramped-up restrictions to contain Omicron, Goldman Sachs analysts said in a note revising down their 2022 growth forecast to 4.3% from 4.8% previously, citing economic costs from the potentially intensified measures.

Analysts at Morgan Stanley also said they saw downside risk to their first-quarter growth forecast for the world's second largest economy this year, as Omicron could "imply more costs than benefits under China's COVID-zero strategy".

In the central province of Henan, the city of Anyang, where Omicron has also been detected in the community, reported 65 local symptomatic cases on Tuesday, a surge from just two a day earlier.

Case numbers in Tianjin and Anyang are tiny compared with outbreaks in many other countries, and the total number of local Omicron infections is unclear.

Still, Tianjin has made it harder for people to leave town, while Anyang ordered residents to remain indoors during mass testing, except for those in essential jobs or undergoing their tests.

Mainland China reported a total of 166 local symptomatic cases for Tuesday, more than 110 a day earlier.