Renault-Nissan to do more together in $26 billion electric bet 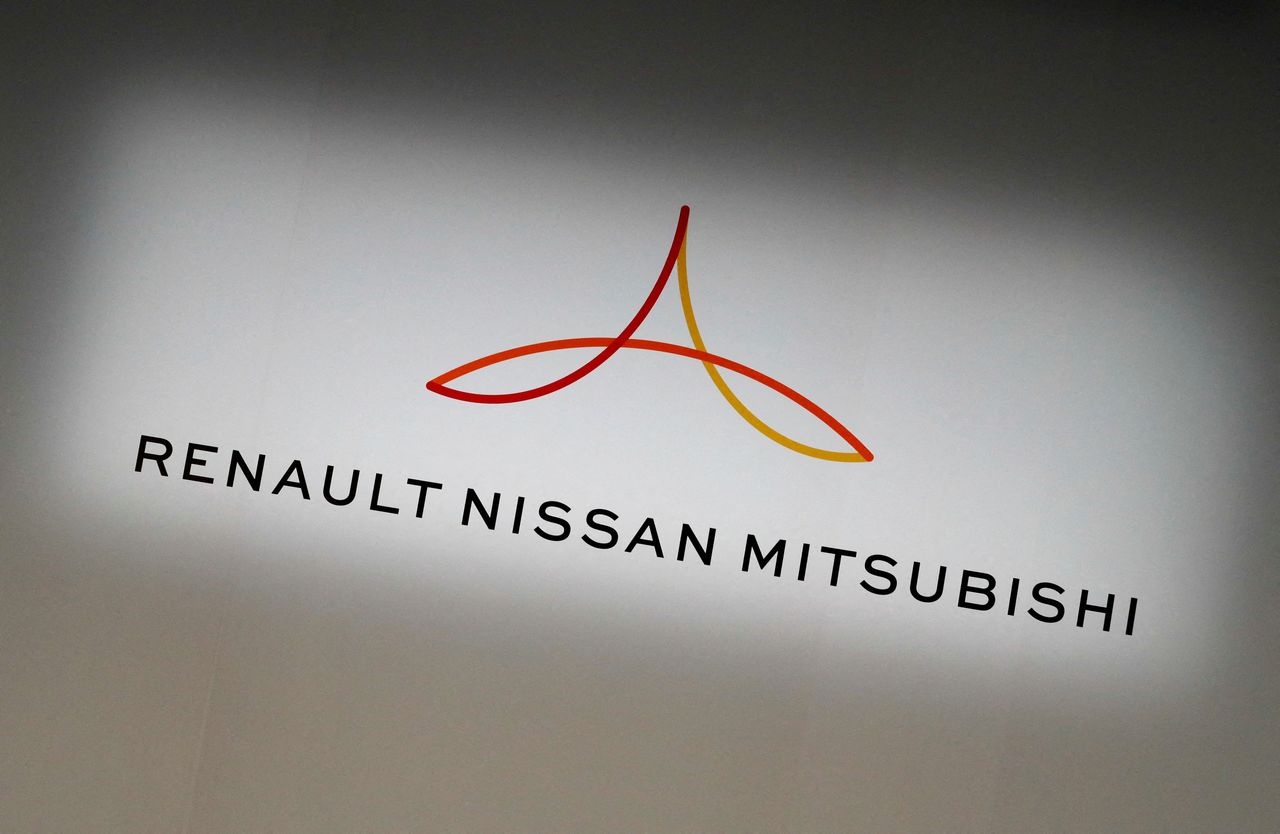 FILE PHOTO: The logo of the Renault-Nissan-Mitsubishi alliance is seen ahead of a Renault, Nissan and Mitsubishi chiefs' joint news conference in Yokohama, Japan, March 12, 2019. REUTERS/Kim Kyung-Hoon/File Photo

By Tim Kelly and Gilles Guillaume

TOKYO/PARIS (Reuters) -Renault and Nissan will work more closely together to make electric cars, they said on Thursday, as they detailed a $26 billion investment plan over the next five years to stay competitive in the switch to cleaner driving.

The two-decade old alliance, which also includes Mitsubishi Motors, said it would increase the number of common platforms for electric vehicles (EV) to five from four.

They will build a combined EV line-up of 35 vehicles by 2030, the companies said, adding that by 2026 four fifths of their models would share common platforms, up from 60% now.

Rocked by the 2018 ouster of alliance founder and chairman Carlos Ghosn amid a financial scandal, the companies have pledged to strengthen their ties by pooling more resources.

"The alliance will hold its place among the world automotive leaders," Alliance Operating Board Chairman, Jean-Dominique Senard, said during an online presentation.

But it faces competition from bigger carmakers with deeper pockets, such as Toyota Motor, which in December pledged to spend $70 billion https://www.reuters.com/business/autos-transportation/toyota-says-have-30-battery-electric-line-up-vehicles-by-2030-2021-12-14 to electrify its fleet, as well as EV specialists such as Tesla Inc.

Now the world's most valuable automaker, Tesla forecast on Wednesday its deliveries in 2022 would grow 50% https://www.reuters.com/business/autos-transportation/tesla-beats-revenue-estimates-record-deliveries-2022-01-26 year on year.

Asked whether the EV spending plan was enough, given it is only around half https://www.reuters.com/business/autos-transportation/volkswagen-board-provide-details-ceos-future-powers-source-2021-12-09 what Germany's Volkswagen AG plans to invest in the technology, Renault Chief Financial Officer Clotilde Delbos said it was "sufficient," given the alliance's past experience in making EVs.

"We are not a second division player when we come together," Renault CEO Luca de Meo said during the presentation.

To power the new EVs, the partners said they planned to secure 220 gigawatt (GWh) hours of battery production capacity by 2030, providing greater scale that would allow them to halve battery costs by 2026 and reduce them by 65% by 2028. They did not give details on how the capacity would be secured.

In June, Renault unveiled a five-year 10 billion euro EV strategy https://www.reuters.com/business/sustainable-business/renault-raises-targets-share-electric-vehicles-2021-06-30 with a plan to launch 10 models and to have EVs account for 90% of all models by 2030.

Nissan said in November it would spend 2 trillion yen ($17.6 billion) over five years to accelerate vehicle electrification, including on EVs and hybrid gasoline-electric cars.

Japan's No. 3 carmaker plans to launch 23 electrified vehicles by 2030, including 15 pure EVs. It has also said it wants to reduce lithium-ion battery costs by 65% within eight years and introduce potentially game-changing all solid-state batteries by March 2029.

Nissan said on Thursday it planned to replace its Micra car in Europe with a new EV using one of the common platforms.

Holding the three-way alliance together is a cross-shareholding relationship, with Renault owning 43.4% of Nissan, which in turn has a 15% non-voting stake in the French car company and a third of Mitsubishi Motors' stock.

Senard declined to comment when asked whether the partners might rebalance the relationship by changing those holdings.

A new structure has been expected by financial markets. Renault has been in the dominant position since it bailed out Nissan two decades ago, but is now smaller by sales than its Japanese partner.

"Life is long and we should never be impatient on that kind of subject," said Senard

(Reporting by Tim Kelly and Gilles GuillaumeEditing by Mark Potter)