For athletes, boarding the plane to Beijing is already a win 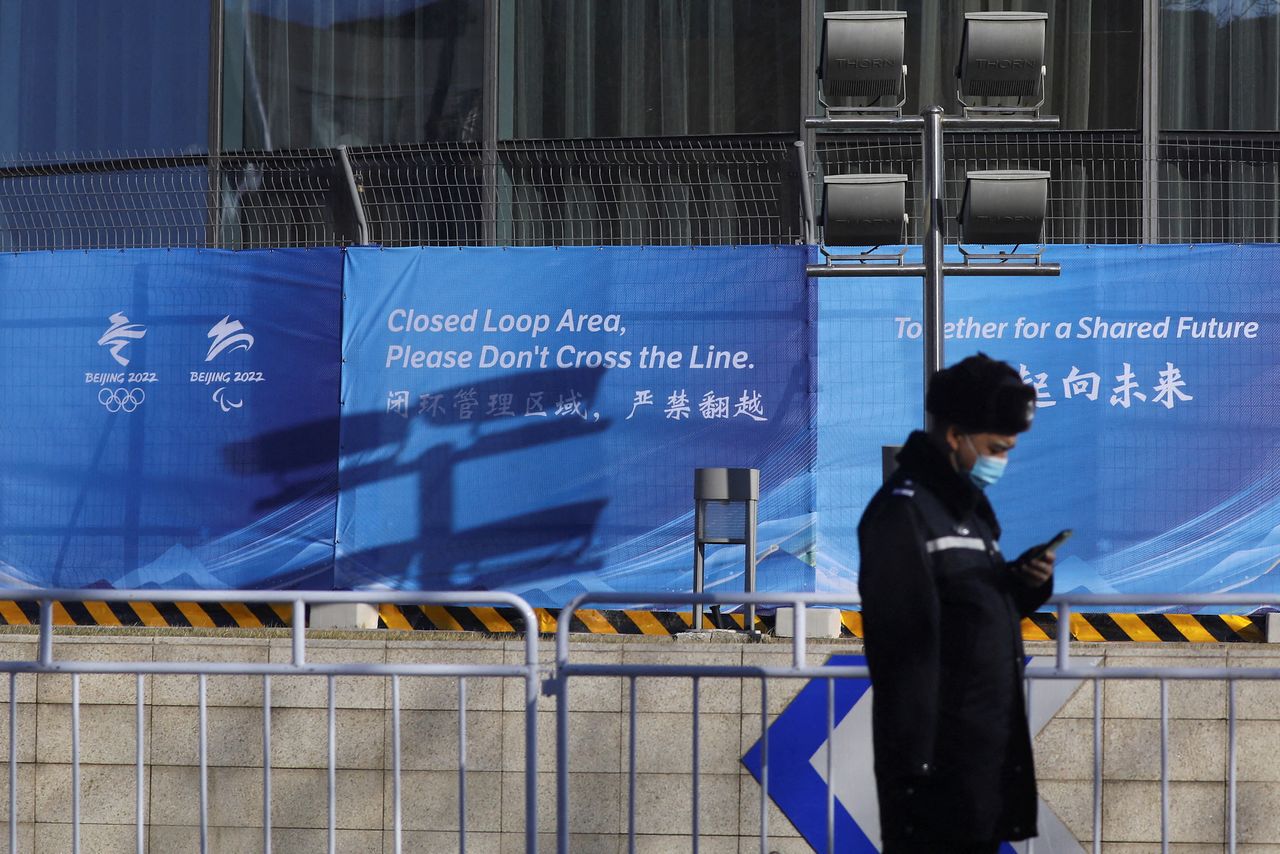 A security guard stands near a banner separating a closed loop area from a street, ahead of the Beijing 2022 Winter Olympics in Beijing, China January 27, 2022. REUTERS/Tingshu Wang

BEIJING (Reuters) - With just over a week until the Winter Games begin, teams are frantically trying to ensure that athletes stay virus-free to get past Beijing's strict checks and make it to the start line as the highly infectious Omicron variant threatens to dash Olympic dreams.

Several teams have reported positive cases of COVID-19 amongst their athletes and coaching staff this week just days before their scheduled departures for China, throwing careful preparations into disarray.

Norway's ski federation said it was delaying the team's departure to Beijing, scheduled for Thursday, by at least four days, after a coach and two competitors, including 2014 cross-country bronze medalist Heidi Weng, tested positive for the virus.

U.S. bobsleigh competitor Josh Williamson missed his flight with his teammates this week after a positive test, he said on social media Wednesday, though he will still compete if he can both get enough negative tests and catch a flight in time.

The Russian team has also been hit by several cases, including figure skater Mikhael Kolyada, who will no longer compete in Beijing after testing positive. Skeleton racer Nikita Tregubov, who won silver in 2018, may also miss out after two positive tests during a training camp in Sochi, southern Russia, his coach said on Tuesday.

"The ones who will have made it to Beijing will already have drawn a lucky ticket," Elena Vyalbe, president of the Russian Cross-Country Skiing Federation on the Games told TV2, Russia's RIA news agency reported on Wednesday.

Teams have gone to great lengths to keep their athletes shielded including chartering flights to reduce close contacts.

In Sweden, the cross country team's ski-waxers have been isolating at home apart from the skiers who have been training in Italy.

"Normally we would have been on site (with the team), but not with the situation as it is at the moment," waxing team boss Petter Myhlback told SVT Sport.

On Monday, Beijing 2022 slightly eased its COVID-19 measures by adjusting the cycle threshold (CT) of PCR tests so that only those with a CT of less than 35 will be deemed positive, making it easier to test negative, although that applies only once athletes arrive in Beijing.

To minimize risks, Beijing 2022 has introduced a "closed loop" system which restricts all Games participants to certain zones in and around venues and accommodation, creating a bubble that separates them from the local population.

The organisers have reported 129 positive cases among Games-related personnel between Jan. 4, when the loop began operations, and Jan. 26. Only two of those have been athletes or team officials, the rest have all been "other stakeholders", the organizers have said.

Athletes must provide proof of two negative tests within 96 hours of their departure for China to get permission to fly and then test every day while there, and close contacts of those infected can be forced to isolate.

Close contacts can still compete but are subject to extra restrictions and tests.

"The main concern in the pandemic situation for us is a matter of getting there safely rather than the bubble itself," the German Olympic Sports Confederation told Reuters.