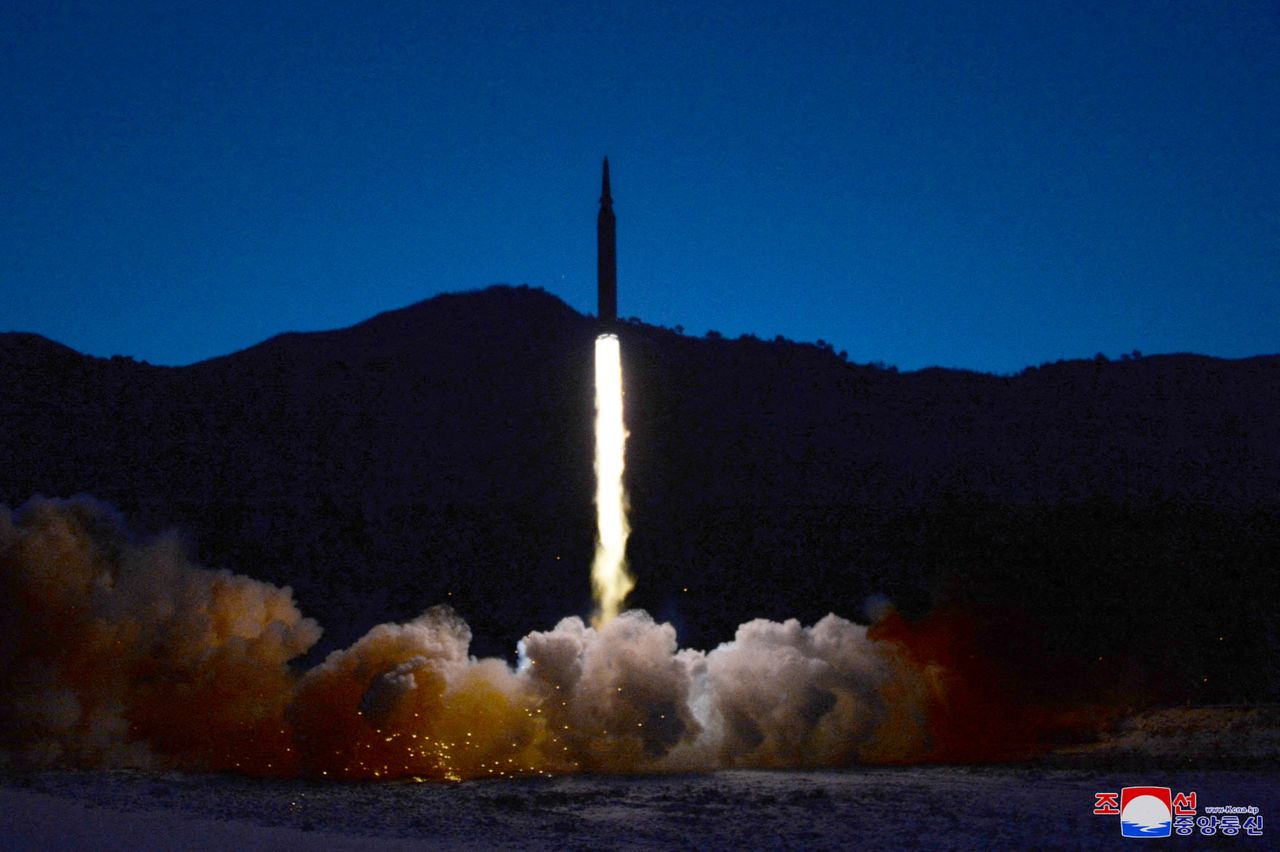 SEOUL (Reuters) - North Korea capped one of its busiest months of missile tests ever with the launch of its Hwasong-12 intermediate-range ballistic missile on Sunday, highlighting efforts to ensure it has reliable systems for delivering nuclear warheads.

January's testing schedule began with the launch of a new "hypersonic missile," and went on to include long-range cruise missiles, and short-range ballistic missiles launched from railcars and airports, underscoring the nuclear-armed state's rapidly expanding and advancing arsenal amid stalled denuclearisation talks.

North Korea hasn't tested its longest-range intercontinentalballistic missiles (ICBMs) or nuclear weapons since 2017, but the Hwasong-12 launch signalled it could soon resume such testing, officials in South Korea and the United States said.

Here are the different types of weapons tested so far thismonth:

North Korea said it tested a new type of "hypersonic missile" on Jan. 5 and again on Jan. 11, with Kim Jong Un reported to have attended the second launch.

Hypersonic weapons usually fly towards targets at loweraltitudes than ballistic missiles and can achieve more than fivetimes the speed of sound - or about 6,200 km per hour (3,850mph).

Despite their name, analysts say the main feature ofhypersonic weapons is not speed but their manoeuvrability, whichcan help them evade missile defence systems.

South Korean officials questioned the claimed capabilities of the missile after the first test, but said second test appeared to demonstrate greater performance.

Analysts said if Pyongyang can perfect such weapons, itwould represent a potential major upgrade in its striking power against its nearby adversaries.

On Jan. 14 North Korea launched a pair of short-rangeballistic missiles (SRBMs) from a train near the northern border with China, in what state media said was a short-notice drill aimed at boosting the proficiency of the troops operating the missiles.

Despite the country's limited and sometimes unreliable railnetwork, rail mobile missiles are a relatively cheap andefficient option to improve the survivability of their nuclearforces, making it difficult for enemies to detect and destroythem before being fired, according to analysts.

The missiles appeared to be KN-23 SRBMs, which were firsttested in May 2019, and are designed to evade missile defencesby flying on a lower, "depressed" trajectory, experts said.

North Korea later fired another pair of KN-23 missiles this time from a wheeled launching vehicle.

The tests confirmed the "explosive power" of itsconventional warhead, state media said, while analysts noted ittravelled on its lowest trajectory yet.

North Korea launched two SRBMs in a rare test from an airport in its capital, Pyongyang, on Jan. 17.

The pair of missiles "precisely hit an island target" offthe east coast, according to state media.

Analysts said the missiles appeared to be KN-24 SRBMs whichwere last tested in March 2020 and appear to have entered massproduction and deployment with military units.

The KN-24 resembles the U.S. MGM-140 Army Tactical MissileSystem (ATACMS) and, like the KN-23, is designed to evademissile defences by flying on a flatter trajectory than traditional ballistic missiles.

The cruise missile would play a role in "boosting the wardeterrence of the country," state news agency KCNA said.

In September, North Korea tested a new "strategic" cruise missile for the first time, seen as possibly thecountry's first such weapon with a nuclear capability.

Analysts said the latest cruise missile appeared to besimilar, but also showed signs of being a possible variant.

North Korea first launched the Hwasong-12 IRBM in April 2017, in a test that “pinwheeled” out of control and was considered a failure by U.S. and South Korean officials.

Two more test flights that month also ended in apparent failure, with the missiles exploding seconds after launch or breaking up in flight.

The first successful flight was in May 2017, and North Korea went on to launch two more Hwasong-12s that year, flying them over the northern Japanese island of Hokkaido.

In Sunday's test, North Korea said it fired the missile on an elevated trajectory "in consideration of the safety of neighbouring countries."

The test "confirmed the accuracy, safety, and operational effectiveness of the produced Hwasong-12 type weapon system," KCNA said. South Korea reported the missile reached an altitude of about 2,000 km (1,243 miles) and flew to a distance of 800 km.

The Hwasong-12 has an estimated range of 4,500 km (2,800 miles), which would put the U.S. territory of Guam and the far western tip of Alaska's Aleutian Islands chain within reach, according to the Washington-based Center for Strategic and International Studies.

It can carry a "large-size heavy nuclear warhead," according to state media, and in 2017 North Korea threatened to use it to target Guam with "enveloping fire."