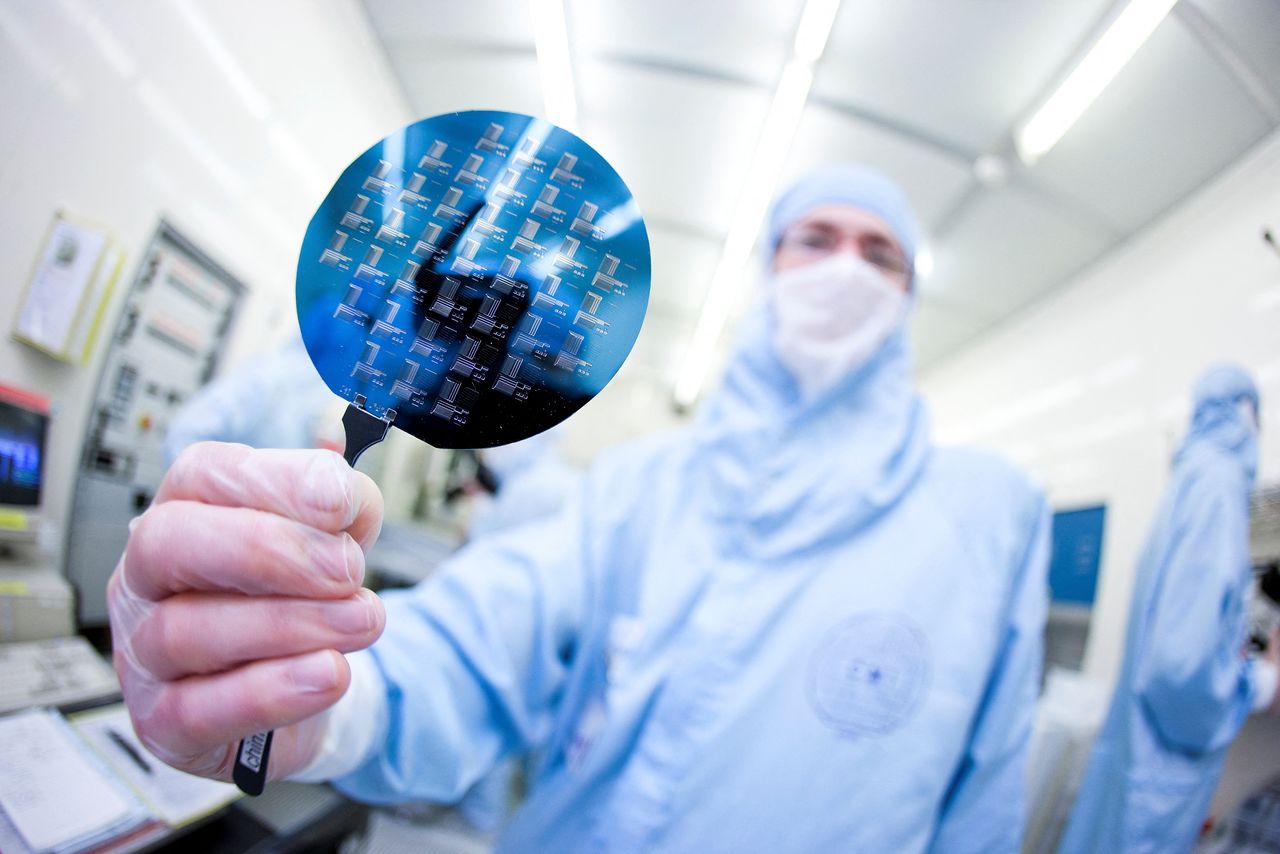 FILE PHOTO: A scientist presents a silicon wafer during a media presentation in one of the low particle pollution nanofabrication clean rooms of the Swiss Federal Institute of Technology (EPFL) in Ecublens, near Lausanne May 16, 2011. REUTERS/Valentin Flauraud/File Photo

By Ludwig Burger and Andreas Rinke

BERLIN (Reuters) -GlobalWafers' planned 4.35-billion-euro ($4.89 billion) takeover of German chip supplier Siltronic collapsed late on Monday as the deal did not receive regulatory approval on time, although the door remained open to another attempt.

The failed acquisition by Taiwan's GlobalWafers comes as a global shortage of semiconductors has laid bare Europe's dependence on Asian suppliers, which has triggered recent efforts to boost production across the continent.

"It was not possible to complete all the necessary review steps as part of the investment review - this applies in particular to the review of the antitrust approval by the Chinese authorities, which was only granted last week," a spokesperson for Germany's Economy Ministry said.

On Jan. 21, China's market regulator said it would give conditional approval for the acquisition.

GlobalWafers left the door open as to whether it would make another offer, retracting an earlier statement on Tuesday in which it shut out the possibility of taking another go.

Still, Siltronic CEO Christoph von Plotho said to German newspaper F.A.Z. that an unchanged offer would be less attractive at this point.

"A lot has changed. Chips are scarce and prices are rising," he said, according to a preview of the paper's Wednesday edition, adding that the firm was working at full capacity.

"An unchanged offer is less attractive from today's perspective."

Shares in Siltronic were up 4.8% at 1126 GMT. Siltronic shares had been trading significantly below GlobalWafers offer price of 145 euros per share for some time after Siltronic flagged in mid-January that the deal was in limbo.

A trader said any sell-off by disappointed investors could offer an entry point, given that Siltronic could be worth more as a standalone business.

"Some analysts already upgraded the stock when the approval became unlikely," the trader said.

The German Economy Ministry, which has in recent years ramped up reviews of planned takeovers of German companies by foreign firms, said an investment review would be carried out again if GlobalWafers chose to make a new acquisition attempt.

GlobalWafers CEO Doris Hsu said the outcome was "very disappointing" and the company would "analyse the non-decision of the German government and consider its impact on our future investment strategy".

Hsu said she would announce on Feb. 6 the company's plans for the 4.35 billion euros which the Siltronic purchase would have cost. Hsu had said earlier the company would probably invest in America if the deal failed.

"Europe remains an important market for GlobalWafers and it remains committed to the customers and employees in the region," the company said in a statement, adding that it would have to pay a termination fee of 50 million euros since regulatory approvals were not obtained.

In a separate statement, Siltronic confirmed the takeover offer had expired due to the German ministry's inaction and that the company stood to receive the termination fee.

Majority shareholder Wacker Chemie, which owns a 30.83% stake in Siltronic, said it regretted the economy ministry's decision, adding it still intended to sell its remaining stake in Siltronic in the medium-term.

The deal would have created the second-largest maker of 300-millimetre wafers, behind Japan's Shin-Etsu, as the semiconductor industry consolidates.

Germany has become wary of changes to its high-tech supply network after carmakers, one of its major sectors, were hit by the global chip shortage.

A recent takeover of a European semiconductor company by an Asian buyer that did go through was the purchase of Dialog Semiconductor by Japan's Renesas Electronics Corp.

GlobalWafers secured a majority stake in Siltronic last year and initially hoped to have the transaction wrapped up in late 2021.