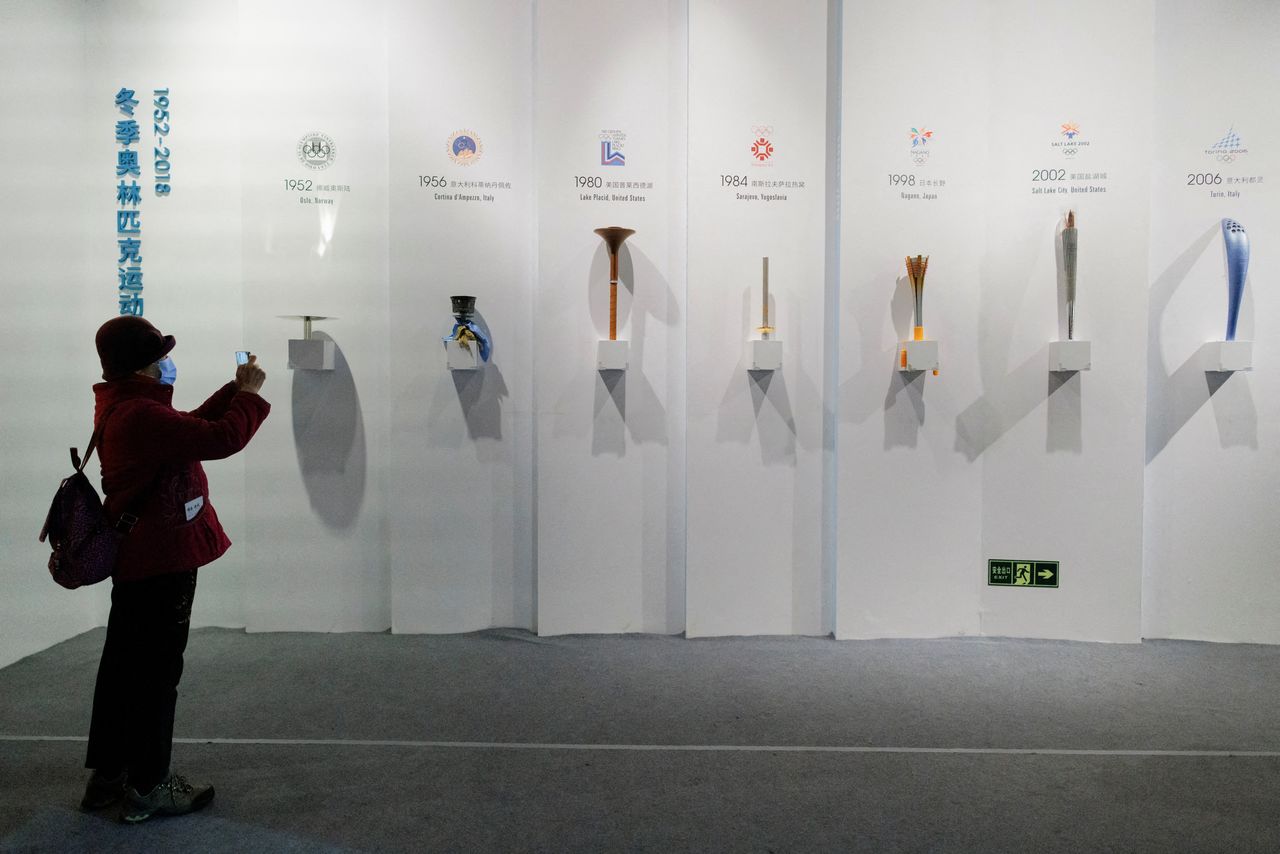 FILE PHOTO: A woman takes pictures of Olympic torches of past Games at an exhibition at the Capital Museum ahead of the Beijing 2022 Winter Olympics in Beijing, China, January 5, 2022. REUTERS/Thomas Peter

BEIJING (Reuters) - The Olympic torch begins its three-day relay on Wednesday, its path abbreviated by COVID-19 and nothing like the 130-day, 137,000 km (85,130 mile) odyssey that proved a magnet for protest ahead of the 2008 Beijing Summer Games.

Beginning in Beijing's Olympic Forest Park, the torch will make stops at landmarks including the Summer Palace and the Badaling section of the Great Wall, as well as Games venues including at Zhangjiakou in neighbouring Hebei province, where some ski events will take place.

At one stop, the torch will be passed underwater by amphibious robots and at another it will be moved by autonomous vehicles, but due to China's tough COVID-19 rules, only selected members of the public will be allowed to watch in person - which will be the case for sporting events during the Feb. 4-20 Games.

The scale of the relay is nothing like 2008, when the globe-trotting torch became a lightning rod for critics of China's human rights record and advocates for Tibet independence, with sometimes violent clashes forcing changes to the itinerary.

The 2008 relay was capped by a team of climbers bringing the torch to the summit of Mount Everest.

This year, the flame was lit in Greece in an October ceremony that was disrupted by human rights activists before it was flown in a red lantern resembling a Han Dynasty artefact to Beijing, where it has been on display at the Olympic Park.

The first Olympic torch relay took place at the 1936 Berlin Games, and Athens super-sized the tradition into a world tour in 2004, which Beijing followed in 2008 with a route that touched six continents.

After that, the IOC banned international Olympic relays and the flame has been flown from Athens to host countries, where it has made a domestic relay.

Ahead of last summer's Tokyo Olympics, the torch travelled more than 2,000 km in 121 days but was moved off public roads due to COVID-19.

This week, the red-and-silver spiral meant to resemble a fluttering ribbon will be carried by 1,200 torchbearers vaccinated and tested for COVID-19.

The relay will end on Friday night, when the last torch-bearer - whose identity is kept secret until the final moment - lights the Olympic cauldron at the Bird's Nest Stadium, where the 2008 opening ceremony was also held.