Olympics-Beijing Games organisers hope to have 30% capacity in venues 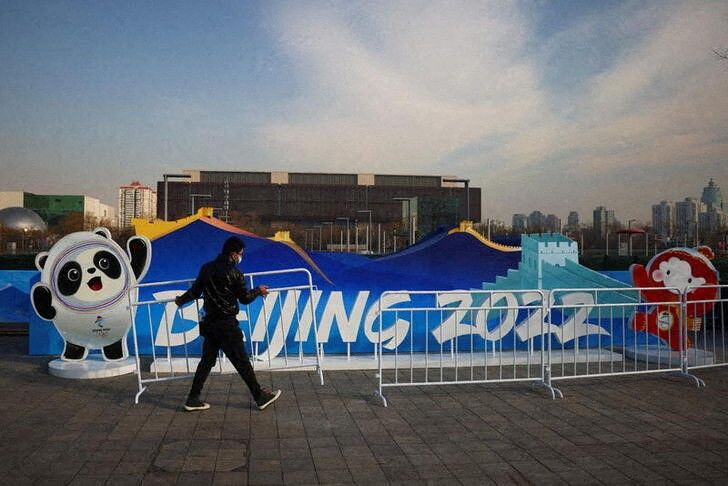 FILE PHOTO: A man sets up a fence around a Beijing 2022 installation near the closed loop "bubble" surrounding venues of the Beijing 2022 Winter Olympics in Beijing, China, January 18, 2022. REUTERS/Thomas Peter

BEIJING (Reuters) - Organisers of the Beijing 2022 Winter Olympics are hoping for stadium capacities of at least 30% despite China's enforcement of tight regulations to contain the spread of the COVID-19 virus, the International Olympic Committee said on Tuesday.

Tickets for the winter sports extravaganza starting on Feb. 4 have not been sold to the local population but instead organisers are distributing them to "targeted" groups of people.

They had already said in September there would be no international spectators at the Games while those receiving tickets will be required to undertake strict COVID-19 prevention measures before, during and after attending Olympic events.

"In terms of capacity we are not there yet, because it has to be fine-tuned at a venue-by-venue basis, but I'd say if we have one person out of three (available spots) or out of two, that would already be a good result," the IOC's Olympic Games Executive Director Christophe Dubi said.

"It could also depend on whether it is outdoors or indoors. But the great thing is that we are going to have spectators."

The Tokyo 2020 Summer Olympics, held last year following a 12-month postponement after the pandemic outbreak, had no fans in any venues, severely affecting the atmosphere during the competitions.

Dubi said while international fans could not travel to China, some foreign citizens living in Beijing would still get the chance to support their home athletes.

"This is not only for Chinese spectators but for Chinese residents, and we were very insistent on that," Dubi told the Games website.

"So they are also reaching out to the expat community and making sure, through the embassies and other ways and means, to identify those who live in Beijing and could attend the Games."

China, which has largely managed to curb local COVID-19 infections, is scrambling to prevent the spread of scattered outbreaks of the highly infectious Omicron variant with the busy Lunar New Year travel period under way.

The Olympics, to be held in the Chinese capital and neighbouring Hebei province, will take place in a "closed loop" that will keep athletes and other Games personnel separated from the general public. Participants are arriving on special charter planes and are tested daily during their stay.

Some 24 new COVID-19 cases were detected among Games-related personnel on Jan. 31, organisers said on Tuesday, bringing the total for the past five days to 143 cases.