Explainer: Why are Russians not competing under their flag in Beijing?

BEIJING (Reuters) - The Russian athletes taking part at this month's Beijing Olympics will be competing without their flag and national anthem because of doping sanctions.

Here is why sanctions were imposed on Russian sport and what they mean for the country's athletes.

WHY ARE THERE SANCTIONS AGAINST RUSSIA?

The World Anti-Doping Agency (WADA) imposed sanctions against RUSADA, Russia's national anti-doping agency, in December 2019. The measures carried a series of consequences for Russian sport on the global stage.

WADA said Russian authorities had "brazenly and illegally manipulated" data from the Moscow Laboratory, despite their handover being a condition for RUSADA's reinstatement.

The agency had been declared "non-compliant" by WADA in November 2015 after a report found evidence of mass doping in Russian athletics.

The WADA sanctions, among other things, barred Russia from flying its flag at major sporting events for a four-year period. The sanctions were later halved after a Russian appeal.

WHAT HAS RUSSIA DONE ABOUT IT?

RUSADA appealed against the decision at the Lausanne-based Court of Arbitration for Sport (CAS).

In December 2020, CAS - sport's highest court - ruled to partially uphold the sanctions but halved them to two years. The sanctions are set to end on Dec. 16, 2022.

The sanctions bar Russia from hosting, bidding or being awarded hosting rights for major international sporting events, including the Olympic and world championships.

They also bar the country from flying its flag and having its anthem played at such events.

WHAT DOES THIS MEAN FOR RUSSIAN ATHLETES IN BEIJING?

The Russian delegation in Beijing, which includes 212 athletes, cannot display the country's tricolour flag or any national emblems or symbols.

Instead of representing Russia, athletes are competing as representatives of the Russian Olympic Committee under the acronym "ROC".

Their uniforms bear the logo of the Russian Olympic Committee -- three flames in the colours of the national flag with the Olympic rings below them -- instead of Russia's flag.

Russian Olympic champions will be awarded their gold medals to Pyotr Tchaikovsky's Piano Concerto No.1, which was selected to replace the national anthem.

WHAT DOES THIS MEAN FOR RUSSIAN OFFICIALS?

The sanctions also mean Russian government officials cannot participate or attend the Olympics. There are exceptions to this rule, however.

Senior officials who are invited by the head of state of the host country can still attend. Invited by Chinese President Xi Jinping to the Beijing Games, Russia's President Vladimir Putin will fill the void left by many foreign dignitaries who are boycotting the opening ceremony on Feb. 4.

HOW HAVE RUSSIANS COMPETED AT PREVIOUS OLYMPICS?

Russians competing in Beijing will be under the same restrictions as their compatriots who took part in last year's Tokyo Summer Olympics.

Russia was also deprived of its flag at the 2018 Pyeongchang Winter Games in South Korea as punishment for state-sponsored doping at the 2014 Sochi Games.

Many Russians were also banned from the 2016 Rio Summer Games in response to a WADA-commissioned report that found systematic doping across a large number of Olympic disciplines.

Russia has acknowledged some shortcomings in its implementation of anti-doping rules but denies running a state-sponsored doping programme. 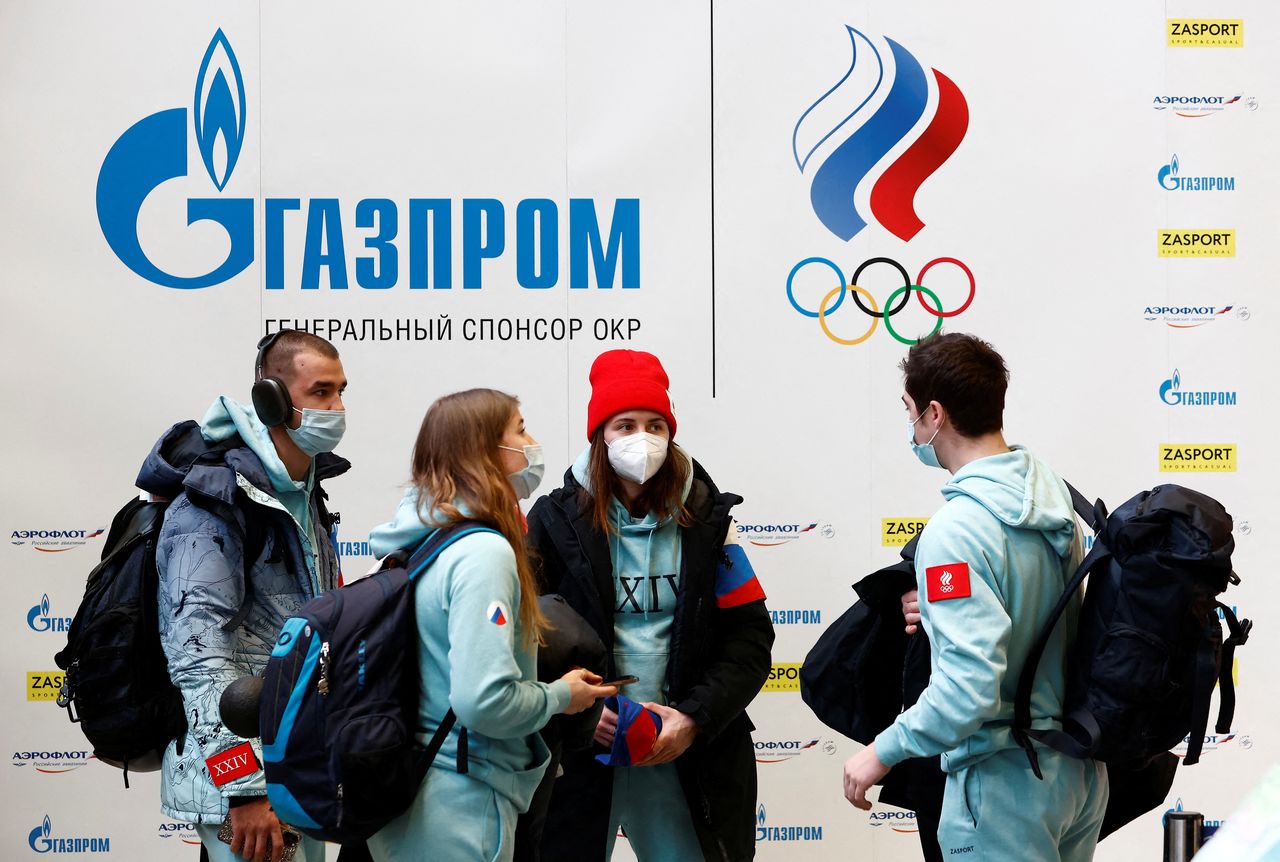 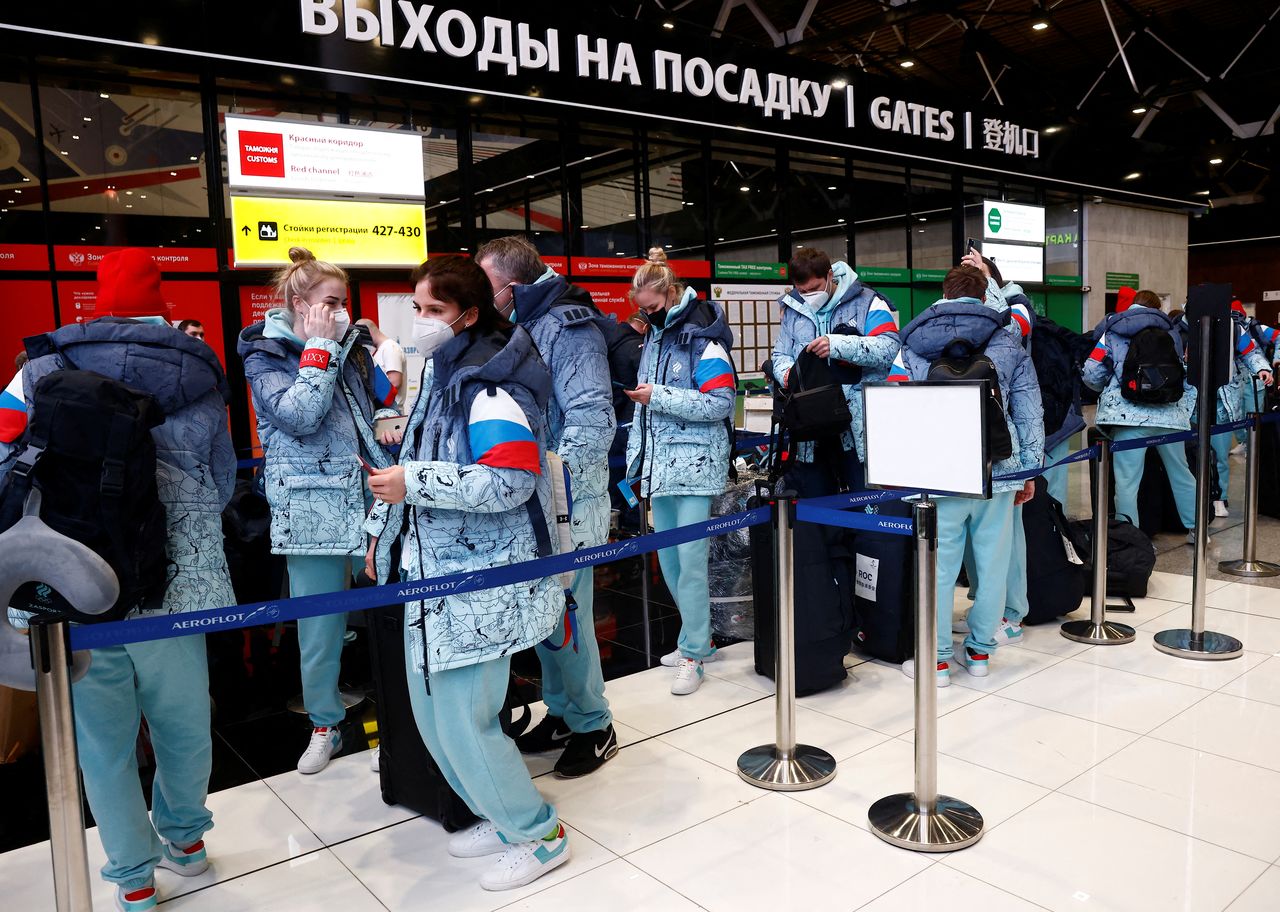 FILE PHOTO: Russian athletes are seen before their departure for the Beijing 2022 Winter Olympics at Sheremetyevo airport in Moscow, Russia January 26, 2022. REUTERS/Maxim Shemetov