Factbox-Russia, China may sign energy, other deals amid Moscow tensions with West

(Reuters) -Russian President Vladimir Putin meets China's leader Xi Jinping this week when he attends the Beijing Winter Olympics and they may seek to deepen trade ties in energy and other areas at a time when Moscow is at loggerheads with the West over Ukraine.

Putin and Xi could sign 15 agreements, Kremlin aide Yuri Ushakov said, adding those deals might cover energy, which is already an area of close cooperation between oil and gas exporter Russia and the world's top energy consumer China.

Ushakov did not give details in his comments on Wednesday, although China may be keen to secure more gas from Russia to use as a transition fuel in its shift away from dirtier coal, which produces more greenhouse gas emissions.

"Quite a few options are under discussions for boosting Russian gas to China," said a Beijing-based gas consultant who asked not to be named, adding Putin might welcome any deal as he was "keen to play the China card" in Moscow's standoff with the West.

China is Russia's top export market after the European Union. Russian imports to China were worth $79.3 billion in 2021, with oil and gas accounting for $44.58 billion, or 56%, according to China's customs agency.

"The two nations have been establishing a mutually beneficial energy alliance," Putin said in comments carried by China's Xinhua news agency, saying these included oil and gas cooperation and other projects, including nuclear power.

Dmitry Marinchenko, a senior director at Fitch Ratings, said China's hunger for oil and in particular natural gas was unlikely to fade any time soon.

"With commodity markets getting tighter over the past year and increased geopolitical tensions China will proceed with its efforts to secure long-term commodity purchase deals, including investments in the related production infrastructure," he said.

Below are details of existing energy and other trade ties:

Russia, Beijing's No. 3 gas supplier, exported 16.5 billion cubic metres (bcm), or about 12.07 million tonnes, of the fuel to China in 2021, meeting about 5% of Chinese demand, sent via pipeline or shipped on liquefied natural gas (LNG) tankers.

Russia, which plans to invest $55 billion in exploration and pipelines, aims to build a second gas pipeline, Power of Siberia 2, with capacity for 50 bcm a year to run via Mongolia.

This pipeline could be plugged into Russia's network system, which is exporting gas to Europe, which would put Europe and China in competition with each other, a prospective which has irked Beijing and made the pipeline less attractive to China.

China, which overtook Japan last year as the world's largest buyer of LNG, imported 4.53 million tonnes of LNG worth $2.78 billion from Russia in 2021, Chinese customs figures show, placing Russia behind Australia, the United States and Qatar.

Russia's Novatek wants to rival Qatar as the world's largest LNG producer over the coming decades and Chinese firms including CNPC have invested in its Yamal LNG and Arctic LNG-2 projects.

About 40% of supplies flow via the 4,070-km (2,540-mile) East Siberia Pacific Ocean (ESPO) pipeline that was financed by Chinese loans worth an estimated $50 billion.

China and Russia both say they want to increase the global role of their currencies and reduce reliance on the U.S. dollar.

China has been using its Belt and Road Initiative to promote trade in the yuan and has signed local currency swap agreements with many participating countries, including Russia.

Russia added the yuan to a list of reserve currencies in 2015 and, as of 2021, about 13% of its international reserves were held in the Chinese currency. Russia's total reserves now stand at $640 billion.

In 2021, Russia added the yuan to its National Wealth Fund (NWF), a part of state reserves, saying it needed to diversify its savings.

Both China and Russia have also been developing alternatives to SWIFT, the international payment network. Beijing has been encouraging the use of its homegrown alternative, known as the CIPS clearing and settlement services system. Moscow has set up its own banking messaging system, known as SPFS. 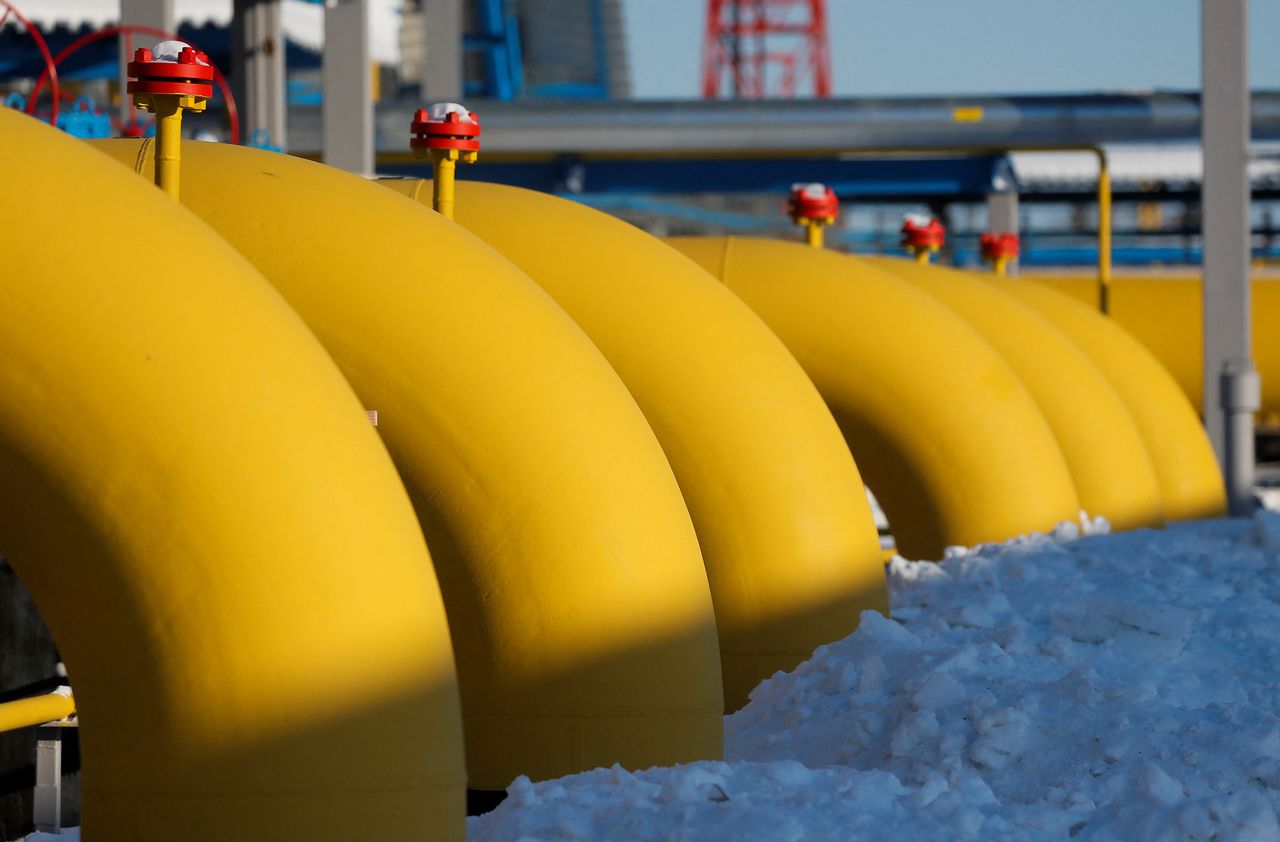 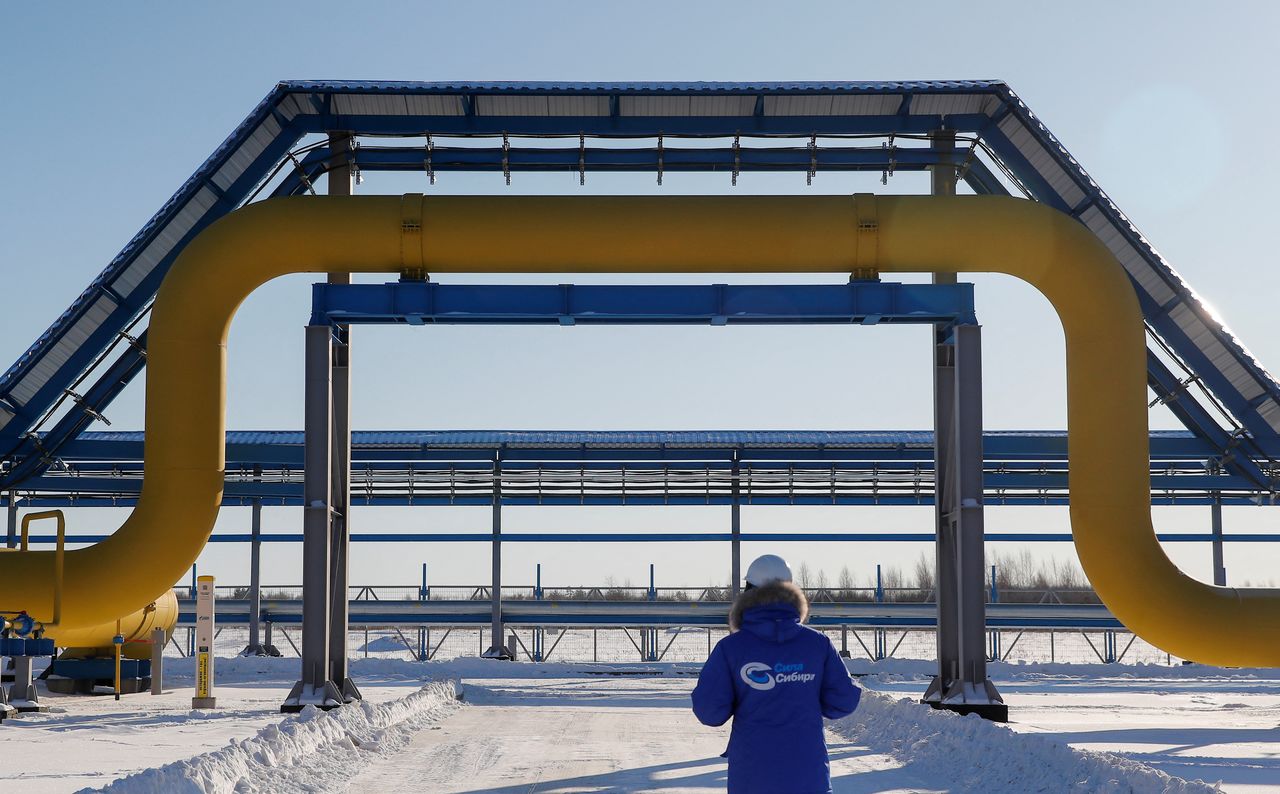 FILE PHOTO: An employee in branded jacket walks past a part of Gazprom's Power Of Siberia gas pipeline at the Atamanskaya compressor station outside the far eastern town of Svobodny, in Amur region, Russia November 29, 2019. REUTERS/Maxim Shemetov./File Photo