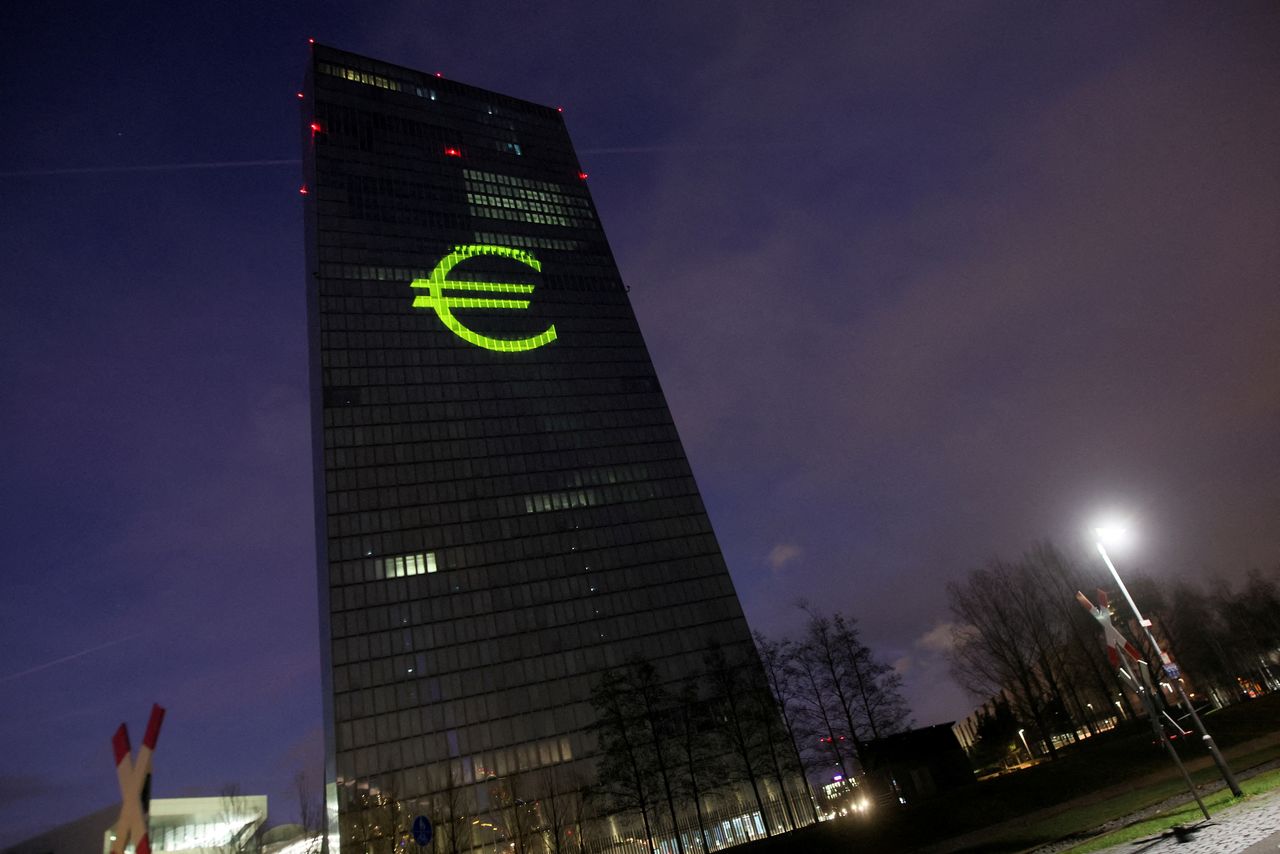 FILE PHOTO: A Euro sign is seen moments before a symphony of light consisting of bars, lines and circles in blue and yellow, the colours of the European Union, illuminates the south facade of the European Central Bank (ECB) headquarters in Frankfurt, Germany, December 30, 2021. REUTERS/Wolfgang Rattay/File Photo

By Balazs Koranyi and William Schomberg

FRANKFURT/LONDON (Reuters) - In just a few short weeks, the balance of power at the world's top central banks has shifted to conservatives, heralding the biggest wave of policy tightening in years.

Yet the rapid retreat of doves in the face of sky-high inflation increases the risk of a policy error as economic fundamentals are not changing as fast as policy sentiment.

The problem is that central banks are under social and political pressure to deal with soaring prices that sap household incomes, erode wealth and dominate the news cycle.

But monetary policy is ineffective in curbing near-term price pressures and action now will only start to take effect when inflation is likely to be retreating sharply anyway.

Still, the European Central Bank put a 2022 rate hike on the table on Thursday and the Bank of England raised rates a quarter percent with a big minority pushing for an exceptionally big 50 basis point interest rate hike.

These moves came just days after the U.S. Federal Reserve signalled a series of rate increases, with the first one likely coming next month, possibly followed by three more moves this year.

With the ECB joining the hawkish camp, the Bank of Japan remains by far the biggest outlier, not even contemplating policy tightening as inflation there remains stuck below target.

"Central banks cannot ignore something that has attracted this much popular attention," Paul Donovan an economist at UBS Global Wealth Management said.

"The result has been a rather difficult ballet, trying to stress that they still realize inflation is worthy of attention but at the same time suggesting it's not a problem that requires an urgent policy response," he said. "None of the major central banks seem to have got the ballet quite right."

"We know that the burden is first and foremost borne by those who are most vulnerable, most exposed and who face the day-to-day hardship of having to put up with higher prices," she said. "I can assure you that that concern was across the board and around the table in equal numbers."

To be sure, early action is not futile.

Quick moves could prevent high inflation from becoming entrenched if companies, whose wage decisions influence future price moves, believe that central banks will not tolerate deviations from their target.

Inflation is without a doubt painfully high. In the euro zone, it hit a record high of 5.1% last month and could still go higher, while in Britain, the peak could be over 7% later this year.

But there is nothing monetary policy can do about global commodity prices like oil, gas and grains, the big drivers of inflation.

And inflation will quickly retreat from its peak. In the euro zone, it could be back around 2% by near the turn of the year. In Britain it could take another year to get to the target but the drop in the second half of the year is still going to be rapid.

Given these limits on policy effectiveness, the swing in favour or policy hawks has been too big for some.

"The doves have thrown the towel," Bank of America said.

"The risk of this ending up as another 'Trichet moment' is not zero," the bank said, referring to the ECB's 2011 rate hikes to temper a small inflation bump on the eve of the bloc's debt crisis, arguably the biggest policy error in the institution's history.

Indeed, one ECB policymaker who asked not to be named, confirmed that policy doves, in the majority for over a decade, are dwindling in numbers.

"In March they (the hawks) will probably be a majority and we'll have to make a decision," he said. "The first thing is to accelerate the tapering and only after we'll consider a rate hike."

Some also see a similar risk at the Bank of England.

BoE Governor Andrew Bailey attempted to temper expectations, warning that while further rate hikes are possible, investors should not get "carried away" and he stressed the "very difficult balance" facing the central bank.

That message was mixed for some, appearing as though the bank was trying to cater to several interests at the same time.

"It came across as an awkward attempt to be hawkish and dovish at the same time, with the bank seeming to be caught between fear of the 1970s redux and of amplifying a slowdown driven by a record squeeze on real disposable income and driving the UK economy into recession," analysts at consultancy Evercore said.