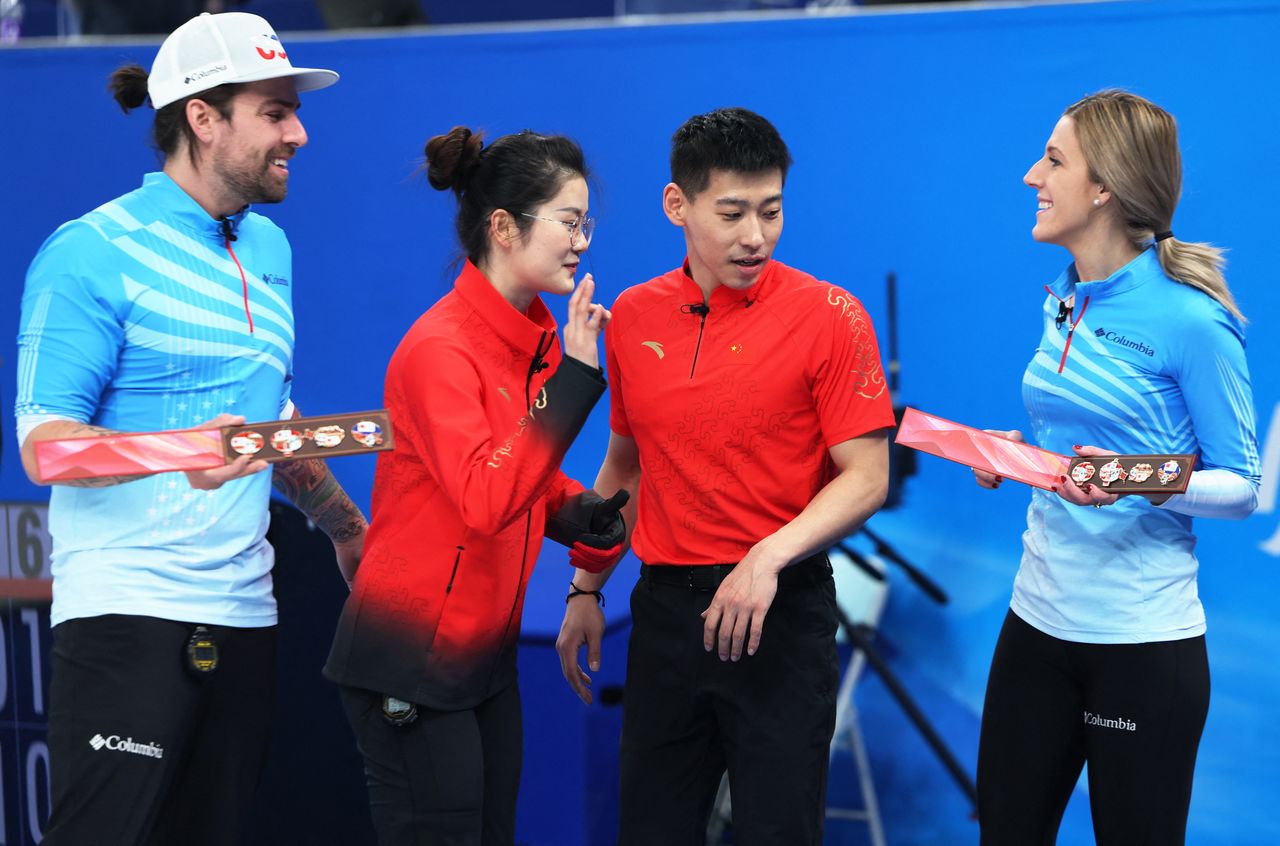 BEIJING (Reuters) - The strained relations between the governments of China and the United States in the run-up to the Winter Olympics have not been reflected on the curling rink in Beijing where the camaraderie has been a lot warmer than the ice underfoot.

After the U.S. beat China 7-5 in the mixed doubles round-robin on Saturday, Fan Suyuan and Ling Zhi presented their American rivals with a set of commemorative pin badges featuring Bing Dwen Dwen -- the panda mascot of the Games.

"They're just beautiful, something super unique. These will be on my desk for a very, very long time," said Chris Plys, who competes for the U.S. with Vicky Persinger.

"I'm definitely going to have to give them something now. They've upped their game big time. We'll find something special to give them to hold onto."

The gesture echoed the 'ping pong diplomacy' triggered by a chance meeting between table tennis players Zhuang Zedong and Glenn Cowen at the world championships in Japan that eventually paved the way for U.S. President Nixon's visit to China in 1972.

In the half century since that trip re-established bilateral ties, relations between the U.S. and China have rarely been as strained as in the run-up to the Beijing Games.

The U.S. was the first to announce https://www.reuters.com/lifestyle/sports/us-officials-boycott-beijing-olympics-cnn-2021-12-06 a diplomatic boycott of the Feb. 4-20 Olympics, later joined by a number of Western nations, due to allegations of Chinese mistreatment of Uyghurs and members of other Muslim minority groups in Xinjiang.

China, who deny the allegations, has said the U.S. would "pay a price" https://www.reuters.com/lifestyle/sports/us-officials-boycott-beijing-olympics-cnn-2021-12-06 for its decision and warned of countermeasures.

"I don't let our country's politics get in the way of what's going on. Let other people at the government level talk about that," Plys added.

"I've never felt any animosity towards us or our country, and we try to show them the same respect. At the end of the day, we all bleed the same blood and play the same game. It's fun to experience each other's cultures and show them it's all love."