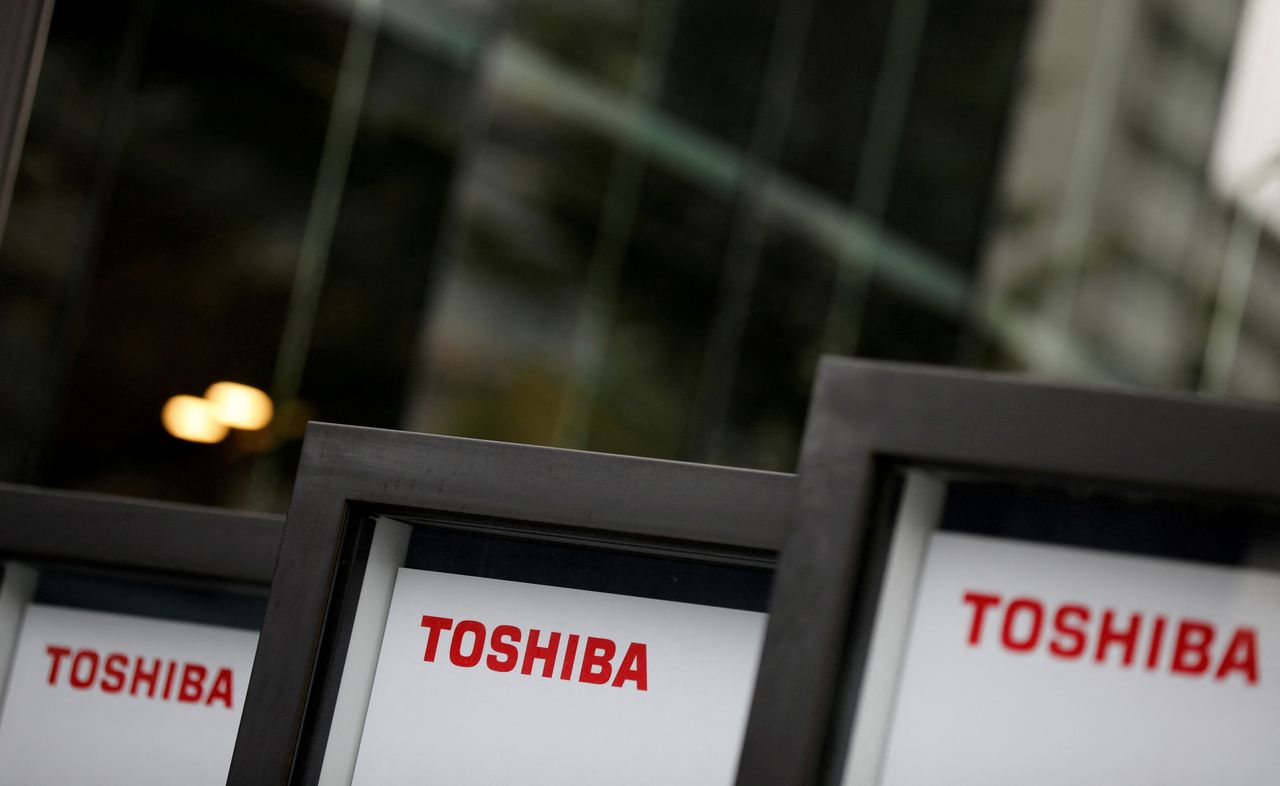 TOKYO (Reuters) -Toshiba Corp announced on Monday that it now aims to break up into two companies instead of three, while also unveiling a big boost to planned shareholder returns in an effort to appease angry investors.

Its revised plan, however, is still expected to face much pushback from foreign hedge funds, many of whom have been opposed to any kind of split and would prefer that the scandal-ridden Japanese conglomerate be taken private.

Under the new restructuring, Toshiba will just spin off its devices business. Its previous plan had called for a three-way split - one company for devices, one for its energy and infrastructure businesses and another to house its Kioxia flash memory chip assets.

Toshiba also intends to lift shareholder returns to 300 billion yen ($2.6 billion) over the next two years, up from an earlier target of 100 billion yen. Shares in the industrial conglomerate closed 1.6% higher following the news.

Sources at several shareholders told Reuters they saw the changes as simply a way for Toshiba management to skirt investor opposition. The new plan is set to seek approval from just over half of shareholders while the previous plan - which had a much larger proportion of assets being offloaded - would have required approval from two-thirds.

Toshiba argued the new plan was simpler, would save costs and would make it easier for alliances with strategic partners to be pursued.

"We have not changed the plan to avoid confrontation with shareholders," CEO Satoshi Tsunakawa told a briefing on the first of two days of meetings with investors, adding the plan would be put to a vote at an extraordinary general meeting in March.

Sources at two investors, who declined to be identified, said they believe the conglomerate would still have a hard time winning support from activist shareholders for the revised plan.

The original break-up plan was announced last November after a five-month strategic review following years of accounting scandals and governance issues that undermined investor confidence and saw Toshiba's market value more than halve, to around $18 billion, from an early 2000s peak.

Whether the conglomerate is ultimately successful in winning sufficient support for its revised plan could depend on the recommendation of influential proxy advisory firms like Institutional Shareholder Services, one of the sources said.

Toshiba has had a contentious history with its foreign activist shareholders, which combined own nearly 30% of the company.

Last year a shareholder-commissioned investigation found that the conglomerate had colluded with Japan's trade ministry to block overseas investors from gaining influence at its 2020 shareholders meeting.

Chief Cabinet Secretary Hirokazu Matsuno said the government would be monitoring the progress of Toshiba's plan.

"Toshiba is a company possessing important technology including nuclear power and semiconductors that are related to national security and it is important that the businesses are maintained and developed," he told a briefing.

Toshiba aims to complete the spin-off and listing of its devices unit by March 2024. The unit competes with far larger rival Infineon Technologies as well as Mitsubishi Electric Corp in power management chips which efficiently control power in cars, electronic devices and industrial equipment.

The business is expected to log 860 billion yen ($7.5 billion) in net sales and 55 billion yen in operating income in the year ending in March.

Toshiba also said on Monday that it will put its elevator and lighting businesses up for sale and added that it no longer sees Toshiba Tec Corp, which makes point-of-sale systems and copiers, as a core business.

Shares of Toshiba Tec finished up more than 14%, their biggest one-day gain in more than 20 years.

Earlier in the day, Toshiba announced it will sell almost all of its 60% stake in its air conditioning unit to its U.S. joint venture partner Carrier Global Corp for $870 million.

Toshiba also said it continues to look at the possibility of a sale of its 40.6% stake in Kioxia Holdings, the world's second-largest maker of NAND flash memory chips, and has asked Kioxia to conduct an IPO as soon as possible.