By Humeyra Pamuk and David Brunnstrom

WASHINGTON (Reuters) -U.S. Secretary of State Antony Blinken will aim with a trip to the Pacific this week to remind the world that Washington's strategic long-term focus remains with the Asia-Pacific region despite an escalating crisis with Russia over Ukraine.

Blinken departs on Monday for Australia, Fiji and Hawaii for a week-long trip and meetings with key allies, aiming to reaffirm a commitment to push back against what the United States calls China's growing economic and military "coercion."

The trip's highlights include a meeting of the informal grouping of Australia, India, Japan and the United States known as the Quad, diplomatic efforts regarding North Korea and discussions on the concerns of Pacific Islands states where U.S. officials believe China wants to establish bases.

U.S. State Department spokesman Ned Price was asked at a briefing on Monday whether Blinken had considered cancelling the trip given the Ukraine crisis. Price replied that the United States is capable of "walking and chewing gum at the same time."

Price nevertheless said Blinken would be "focused to a large degree" on the Ukraine crisis.

"We are a big country. We are a big department. We have a lot of challenges on our plate," Price said, adding that Blinken would remain in contact with his U.S. government counterparts on the Ukraine issue during the trip.

Blinken's trip comes days after China and Russia declared a "no limits" strategic partnership https://www.reuters.com/world/europe/russia-china-tell-nato-stop-expansion-moscow-backs-beijing-taiwan-2022-02-04 - their most detailed and assertive statement to work together - and against the United States - to build a new international order based on their own interpretations of human rights and democracy.

China and Russia pledged mutual protection of core interests - an apparent reference to Russia and Ukraine as well as Taiwan, a self-ruled island that Beijing claims as its own. Their joint statement also denounced U.S. moves to counter China through AUKUS, a pact under which the United States and Britain will provide Australia with nuclear-powered submarines.

U.S.-Chinese ties are at their lowest point in decades as the world's top two economies disagree on issues ranging from Hong Kong to the South China Sea and China's treatment of ethnic Muslims. Russia's potential invasion of Ukraine, the most serious threat of a major conflict in Europe since the Cold War's end, only complicates matters.

Charles Edel, an expert on Asia and Australia at the Center for Strategic and International Studies think tank, said Blinken's trip "underscores just how important - and how challenging - it is for Washington to maintain focus on the Indo-Pacific."

Meeting in Melbourne, the Quad countries are expected to discuss how to further goals including climate policy and providing COVID-19 vaccines to Southeast Asia ahead of an expected May summit in Japan that President Joe Biden plans to attend.

In meetings with Fiji's prime minister and Pacific Island leaders, climate policy and the security challenge posed by China are expected to be front and center.

"The speed and extent of China's outreach to the Pacific Islands has served as a wakeup call," said Daniel Russel, the top U.S. diplomat for East Asia under former President Barack Obama.

Lawmakers from the Pacific Island republic of Kiribati said last year China had drawn up plans to upgrade an airstrip on one its remote islands about 1,860 miles (3,000 km) from Hawaii. This would offer China a foothold deep in territory firmly aligned with the United States and its allies since World War Two.

The United States has said the AUKUS pact and expanding Quad cooperation show its Indo-Pacific commitment. Analysts have said former President Donald Trump's withdrawal from a trade framework now known as the Comprehensive and Progressive Agreement for Trans-Pacific Partnership (CPTPP) undercuts U.S. engagement with a region where many countries count China as their main trading partner.

Biden told Asian leaders in October that the United States would launch talks on a new Indo-Pacific Economic Framework, but few details have emerged and his administration has been reluctant to offer the increased market access Asian countries desire, seeing this as threatening American jobs.

In Hawaii, Blinken will host Japanese and South Korean counterparts for discussions expected to center on North Korea, which has conducted a slew of missile launches this year, raising fears it may return to testing intercontinental ballistic missiles and nuclear bombs for the first time since 2017.

(Reporting by Humeyra Pamuk and David Brunnstrom; Editing by Will Dunham) 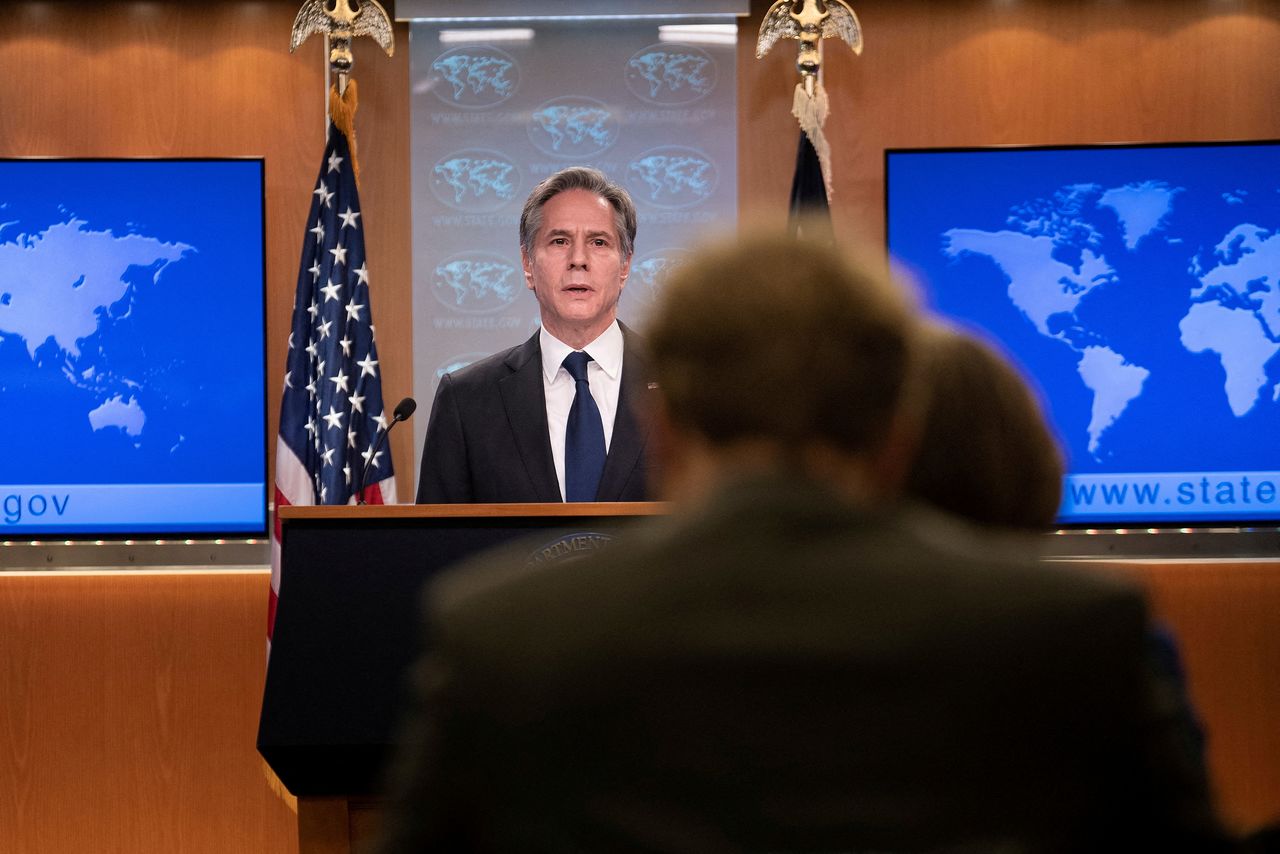 FILE PHOTO: U.S. Secretary of State Antony Blinken speaks about Russia and Ukraine during a briefing at the State Department in Washington, U.S., January 26, 2022. Brendan Smialowski/Pool via REUTERS/File Photo 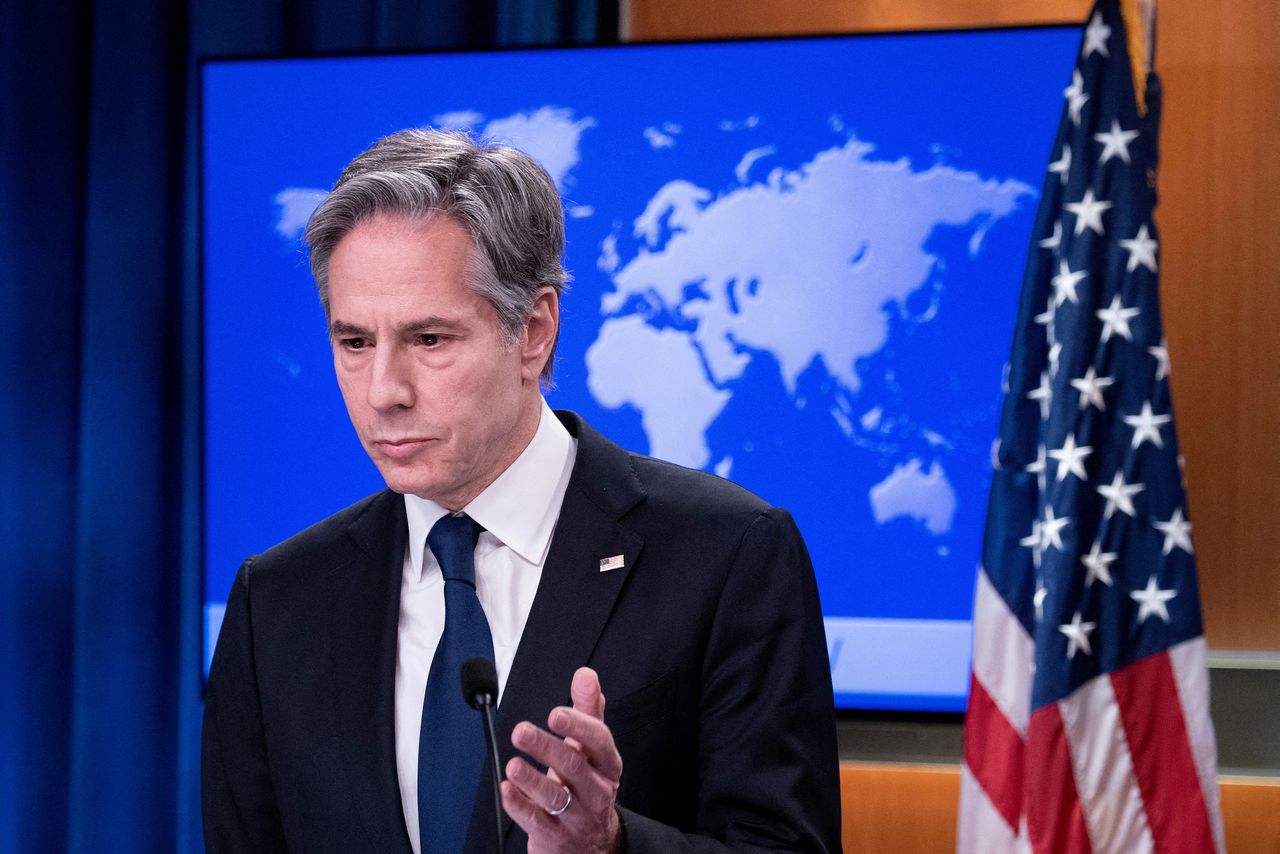