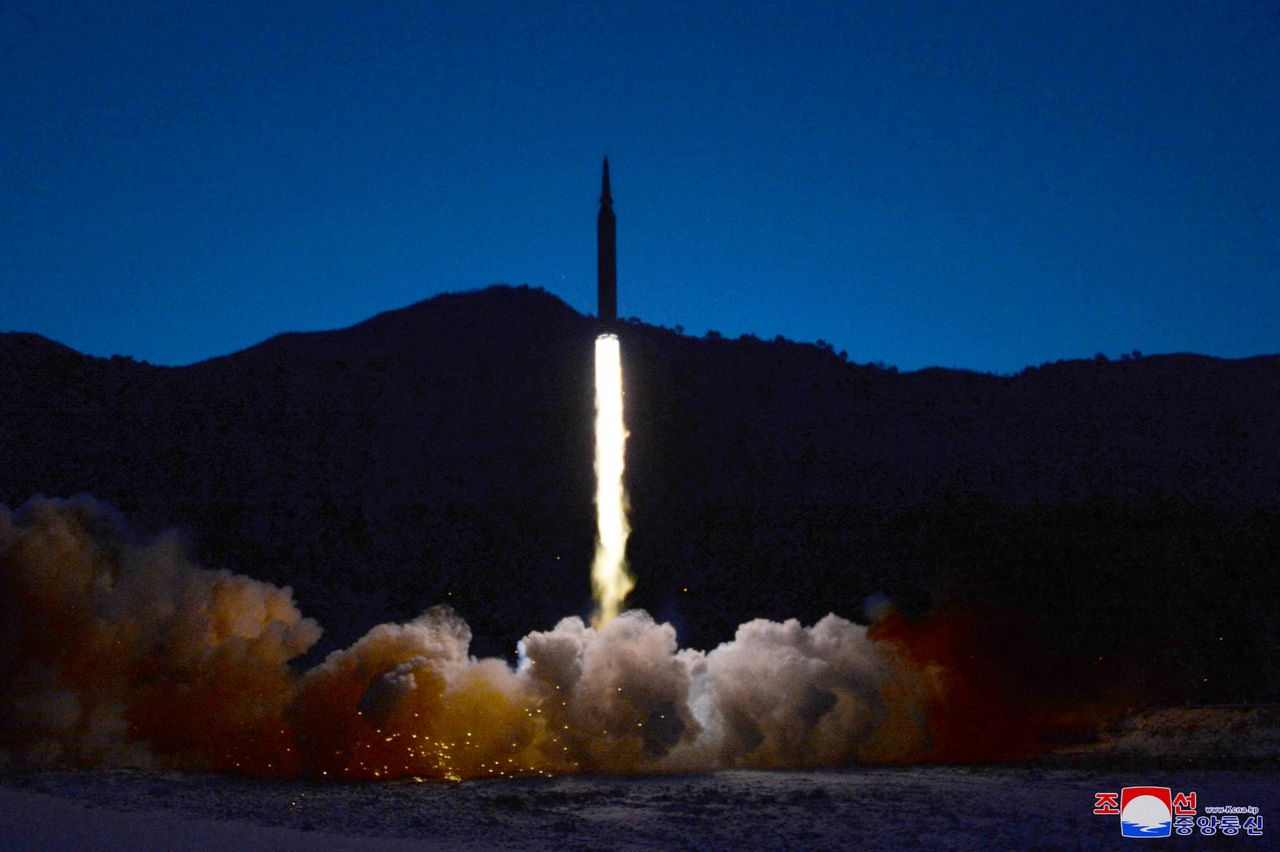 FILE PHOTO: A missile is launched during what state media report is a hypersonic missile test at an undisclosed location in North Korea, January 11, 2022, in this photo released January 12, 2022 by North Korea's Korean Central News Agency (KCNA). KCNA via REUTERS ATTENTION EDITORS - THIS IMAGE WAS PROVIDED BY A THIRD PARTY. REUTERS IS UNABLE TO INDEPENDENTLY VERIFY THIS IMAGE. NO THIRD PARTY SALES. SOUTH KOREA OUT. NO COMMERCIAL OR EDITORIAL SALES IN SOUTH KOREA./File Photo/File Photo

WASHINGTON (Reuters) - A Washington think tank says it has identified a military base close to North Korea's border with China that is likely intended for stationing of intercontinental ballistic missiles.

The Center for Strategic and International Studies based its report https://beyondparallel.csis.org/undeclared-north-korea-hoejung-ni-missile-operating-base on Jan. 21 satellite images of the base at Hoejung-ni, in North Korea's Chagang province about 25 km (16 miles) from the border with China and 280 km (175 miles) northeast of Pyongyang.

"The Hoejung-ni missile operating base will, according to informed sources, likely house a regiment-sized unit equipped with intercontinental ballistic missiles," the report said.

"Should operational ICBMs not become available in the near term, it is likely that intermediate range ballistic missiles (IRBMs) will be deployed," the report added, noting that North Korea tested a Hwasong-12 IRBM from Chagang province last month.

It said Hoejung-ni was one of approximately 20 ballistic missile bases that have never been declared by North Korea and that although its construction began 20 years ago, it was one of the latest to be completed.

Analysts say stationing ICBMs so close to China would make any pre-emptive strike against them difficult because of the risk of hitting Chinese territory.

The CSIS report comes after a slew of recent North Korean missile tests that have raised fears that the country may resume ICBM tests. North Korea has suggested it could restart such tests suspended since 2017 because the United States has shown no sign of dropping "hostile policies".

Asked about the CSIS report, a spokesman for the U.S. defense department, Lieutenant Colonel Marty Meiners, declined to comment on "matters of intelligence or commercial imagery analysis."

On Saturday, Reuters obtained an excerpt of a confidential United Nations report that said North Korea had continued to develop its nuclear and ballistic missile programs in the past year and cyberattacks were an important revenue source for Pyongyang in the face of international sanctions.

CSIS said there were no signs of an ICBM unit at the base as of January and no protective anti-aircraft positions could been seen within 10 km (6 miles), while the nearest "readily identifiable" surface-to-air missile base was 50 km (30 miles) away.

However, it said its images showed Hoejung-ni to be active and well maintained by North Korean standards and that minor development of its infrastructure was continuing.

Each facility consisted of a large concrete-reinforced shelter cut into the side of the adjacent mountain measuring about 35 meters (yards) in length long, sufficiently large to accommodate all known North Korean mobile missile launchers.