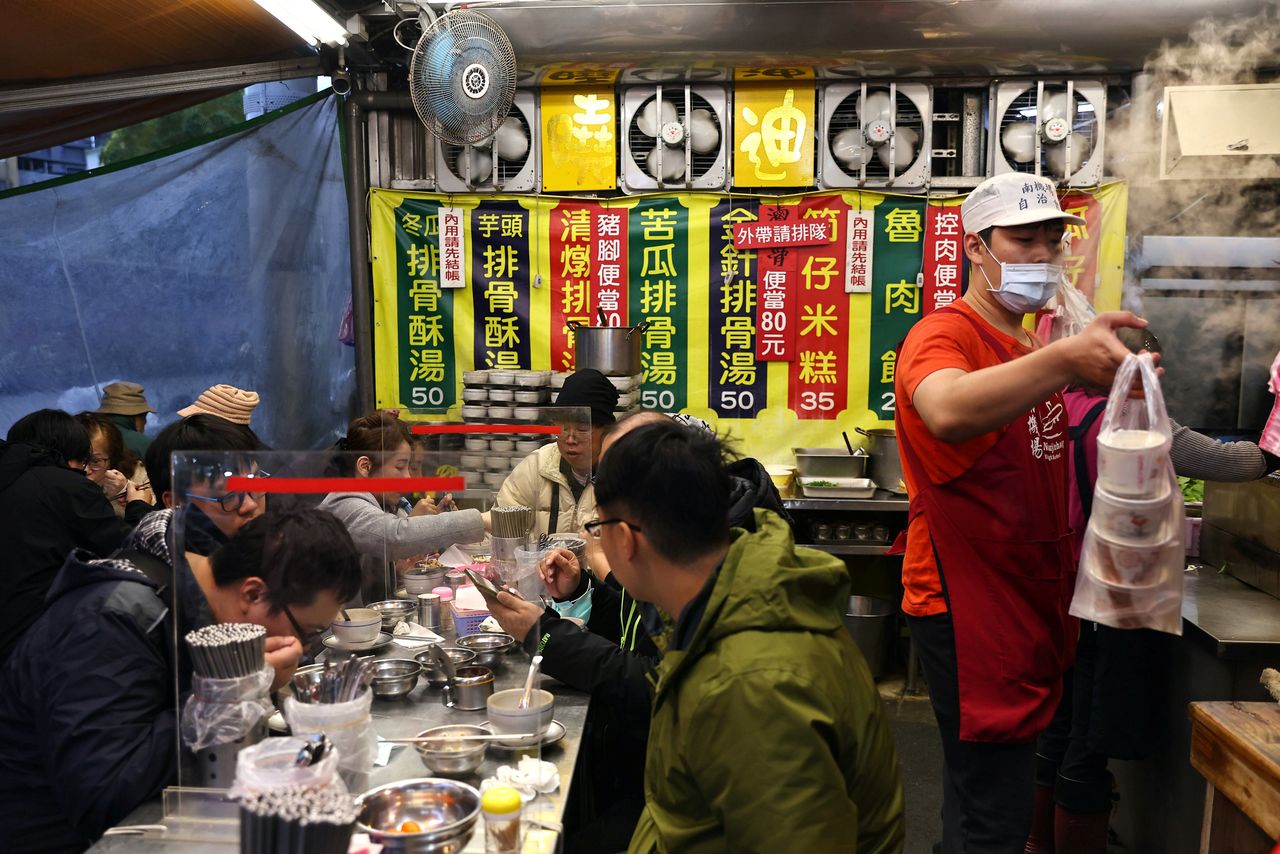 FILE PHOTO: A staff member wearing a protective mask, amid the coronavirus disease (COVID-19) pandemic, serves food in a restaurant at a market in Taipei, Taiwan, January 6, 2021. REUTERS/Ann Wang

By Yimou Lee and Ben Blanchard

TAIPEI (Reuters) -Taiwan said on Tuesday it would relax a ban on food imports from Japan put in place after the 2011 Fukushima nuclear disaster, hoping to ease entry to a trans-Pacific trade pact and deepen ties at a time when both governments are worried by China.

Japan, like most countries, has no formal diplomatic relations with Chinese-claimed Taiwan, but the two have moved closer as Beijing ramps up its military activity near both Taiwan and Japan.

Writing on her Facebook page about the Cabinet decision to relax the ban, President Tsai Ing-wen said Taiwan had to "go global and stand in the world" by joining bodies like the Comprehensive and Progressive Agreement for Trans-Pacific Partnership (CPTPP).

The World Health Organization said in 2016 that the Japanese authorities had monitored food contamination closely and implemented protective measures to prevent sale and distribution of contaminated food in Japan and outside of Japan after the Fukushima tsunami and nuclear disaster.

Japan has said many nations such as the United States and Australia had lifted or eased Fukushima-related restrictions, and Fukushima food including rice is being exported to markets like Thailand.

Taiwan banned imports of food products from five prefectures in Japan following a meltdown at the Fukushima nuclear plant that was triggered by a huge earthquake and tsunami.

Taiwan had maintained the ban despite repeated complaints from Japan which says the food is now safe.

Announcing the shift in Taiwan's policy, Cabinet spokesperson Lo Ping-cheng said that with so many countries lifting restrictions already Taiwan had to follow suit, and that there was no safety risk with strict checks in place.

"To join the international economic and trade system, to join the high-standard CPTPP, one cannot stand on the outside and be stuck in old ways or ignore scientific evidence," he said.

"We cannot evade the reasonable demands made by Japan."

Japan's de facto ambassador in Taipei, Hiroyasu Izumi, said in a statement he was "very gratified" by the move, and spoke of their shared values as close neighbours and friends.

"For Japan, Taiwan is a precious partner that shares universal values ​​such as freedom, democracy, human rights, the rule of law, and fair trade," he added.

SOME CONTROLS TO REMAIN

However, an import ban on certain products from the five Japanese prefectures such as mushrooms and wild animals would remain, Lo said, while other products from there are required to present radiation test results and proof of origin before they are allowed into Taiwan, and will be tested again upon arrival.

Lo added that the announcement, which is likely to come into effect in late February, was not part of a deal in exchange for Japan's CPTPP entry support, though admitted he thought it would help their entry into the bloc.

Taiwan last year applied to join the CPTPP, of which Japan is a member. Japan has already expressed support for Taiwan joining the CPTPP. China, which maintains a ban on Fukushima-related food, has also applied to join.

In a 2018 referendum, Taiwan voted by a wide margin to maintain the ban, though referendum results are only binding for two years.

Eric Chu, head of Taiwan's main opposition party, the Kuomintang, said no government could "tear up" the referendum result and the ruling Democratic Progressive Party would "pay the price".