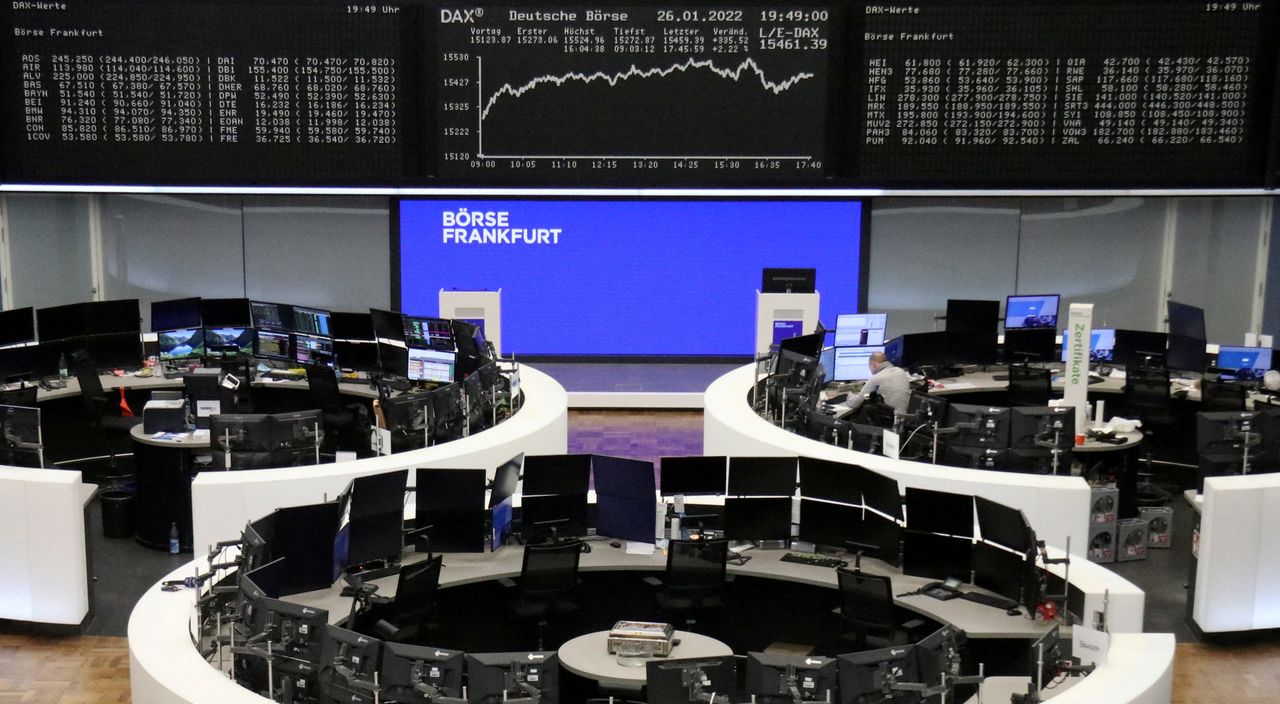 By Chris Prentice and Dhara Ranasinghe

The benchmark 10-year U.S. Treasury yield slipped from multi-year highs hit in the previous session, helping steady sentiment across global markets and boosting demand for growth stocks. The S&P 500 and the Nasdaq Composite jumped more than 1% as tech stocks extended their rally.

The pan-European STOXX 600 rose 1.7% with automakers leading gains with a 4.0% jump. Volkswagen was among the top boosts to the index, up 6.1%, while its biggest investor, holding company Porsche <SE PSHG_p.DE> jumped 8.2%.

MSCI's broadest index of Asia-Pacific shares outside Japan rose 1.8% to a more than two-week high and the blue-chip Nikkei closed just over 1% higher.

Investors also took comfort in positive news headlines over recent days suggesting tensions between the West and Russia over Ukraine may be easing and a string of upbeat earnings lifted sentiment towards risk assets.

French President Emmanuel Macron, who met Russian President Vladimir Putin on Monday, said on Tuesday he believed steps can be taken to de-escalate the crisis in which Russia has massed troops near Ukraine but says it does not plan an attack.

Facebook owner Meta Platforms surged more than 5%, ending four sessions of deep declines that saw it lose almost a third of its value. The biggest boosts to the S&P 500 came from Nvidia, up 2.2%, and Microsoft, up 6.4%.

"But we retain our view that a greater concern for risky assets is a removal of central bank accommodation as markets have become used to abundant liquidity and low rates for a long period of time."

Japan's 10-year bond yield pulled back from a session peak of 0.215%, its highest since January 2016. But after sharp selling, broader bond markets stabilised with prices rising and yields falling.

The U.S. two-year Treasury yield rose to its highest since February 2020. [US/]

"Our economists expect the Fed to hike five times this year, three times in 2023, and twice in 2024," Goldman Sachs said in a research note.

"I would say this move in bonds has been overdone. The speed has been so quick since Thursday, a correction was due," said Piet Haines Christiansen, chief strategist, Danske Bank. "We still have the U.S. CPI tomorrow, so let's see what happens after that."

Last week's hawkish stance by the ECB has left Bund yields on track for their biggest monthly rise in a year.

Rising borrowing costs and signs of rates normalisation in Europe have boosted bank stocks - a sub-index of European banking stocks is at its highest since 2018, up sharply since Thursday's ECB meeting.

The euro was up 0.1%, steadying off from a three-week high, after European Central Bank President Christine Lagarde dialed down bets for aggressive interest rate hikes.

Gold prices were higher on Wednesday as a weaker dollar offered support to the safe-haven metal ahead of U.S. inflation data. U.S. gold futures settled up 0.5% at $1,836.60. [GOL/]