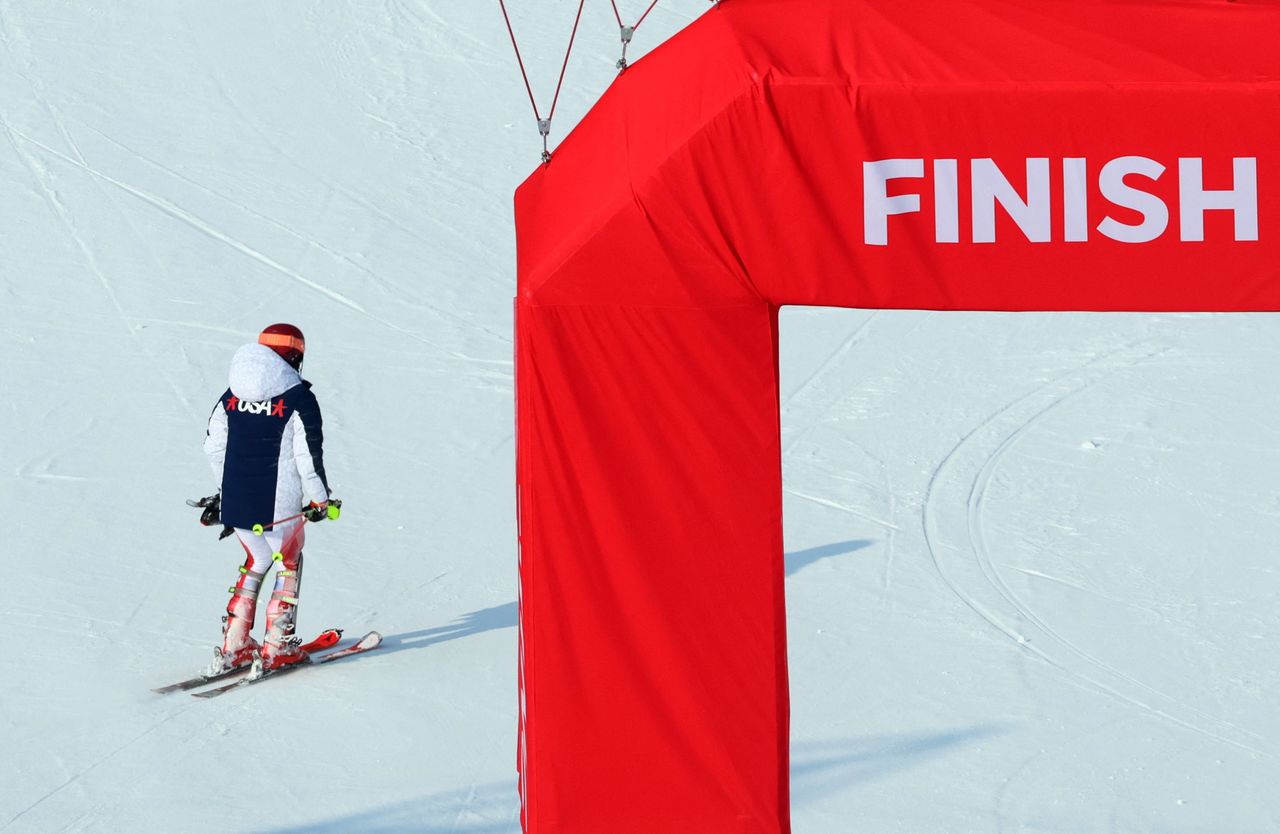 YANQING, China (Reuters) -Mikaela Shiffrin was expected to cement her position at the top of her sport in the Beijing Games but after not finishing a race so far her story echoes the disappointments of fellow elite athletes Simone Biles and Naomi Osaka at the Tokyo Olympics.

After crashing out of the giant slalom on Monday, the 26-year-old Shiffrin, one of the world's most successful Alpine skiers, exited at an early stage in Wednesday's slalom race.

The American sat slumped by the side of the course with her head in her hands after her aborted run, and choked back tears while trying to come to terms with what had happened.

In Tokyo, gymnast Biles and tennis player Osaka said the pressure and media attention had got too much and weighed on their ability to perform at their highest level.

While Shiffrin said she could handle the pressure, had much to be optimistic about and even thanked journalists for words of encouragement after her slalom, she was wrestling with the hows and whys of her disappointing performance.

"It's taken a lot of years and I'm not scared to feel a little weighed down by some expectation anymore."

Biles and Osaka received praise for reminding people that athletes are also human.

Biles did not finish her scheduled competitions at the summer Games due to a sudden and dangerous disorientation in midair, later saying mental health was more important than sports.

Osaka had pulled out of other big events before Tokyo to avoid the media which she said was affecting her mental well-being. She eventually lost to a much-lower ranked player in the Olympics.

Shiffrin said she was not sure whether she would compete in the remaining Alpine events in Beijing.

"My whole intention building up, this whole season, since this summer, was to ski these races aggressively. That's what I was doing. Problem is, you have to finish and that's obviously my main issue right now apparently and that's never been an issue in my entire career," Shiffrin said.

"I feel like there's a lot I can analyse about it but my goal was to push and maybe I pushed a little over the limit. Maybe that's because of the pressure, it's probably better to ask some psychologist about that or everybody is going to have an opinion anyway. Honestly I'm at a loss so it's hard to really know what exactly went wrong."

Sports psychologist Gene Moyle agreed that it was helpful to identify the option of a reset, but that if an athlete then fails again it can make bouncing back more difficult.

"Expectations for success can come from a positive place, from the country that you represent or people in your environment, they want the athlete to do really well," he said.

"This can be exacerbated from a media perspective, that can be extra pressure," Moyle, who has worked with Winter Olympians, added.

"There is that sense of the athlete not wanting to let people down. And sometimes you have to work with the athlete to push that external pressure to the side."

Shiffrin travelled to Beijing as a three-times overall World Cup champion and with three Olympic medals under her belt. But she is also still mourning her father who died in an accident in 2020.

In addition to sporting achievements putting her in the spotlight, media attention has also focused on Shiffrin's relationship with Alpine skier Aleksander Aamodt Kilde of Norway, who won bronze in the men's super-G on Tuesday.

"There's so much to be optimistic about," Shiffrin said, gazing at the sky over the Xiaohaituo mountains. "I have three medals. Those are still back home in my closet."